The Trade War is giving 5G fits, well, semiconductor stocks more specifically. We've already witnessed weakness in data center along with memory pricing. Now, we have to factor in a potential embargo against Huawei into the sales of even the most popular semiconductor names.

Xilinx (XLNX) , while not on this list, is struggling post-earnings after 5G uptake and data center sales disappointed. That's been a top 5G name. Today, Qualcomm (QCOM) , a second favorite name, has yellow flags abound, because of Huawei exposure.

The lower you are on this list, the worse it may be for the company. I'd focus on the right side rather than the left, percentage of revenue concerns me more than the nominal figure. That's good news for Qualcomm since it is slightly higher on the Most Exposed chart as compared to the Revenue From Huawei chart. Still, the more than 5% of revenue from Huawei is a yellow flag. The largest risk lands in fiber optics names, but a dozen chip companies face the potential loss of between 2% and 6% of their current revenue.

Qualcomm shares were trading lower by 4% today after being much lower in early Monday trading. I'd argue this is a reasonable reaction. The company can adjust for a portion of the lost revenue, and nothing says it will be permanent. My only concerns would be for the bottom five names.

Unfortunately, the move lower today has introduced a technical risk to Qualcomm traders who should watch closely. 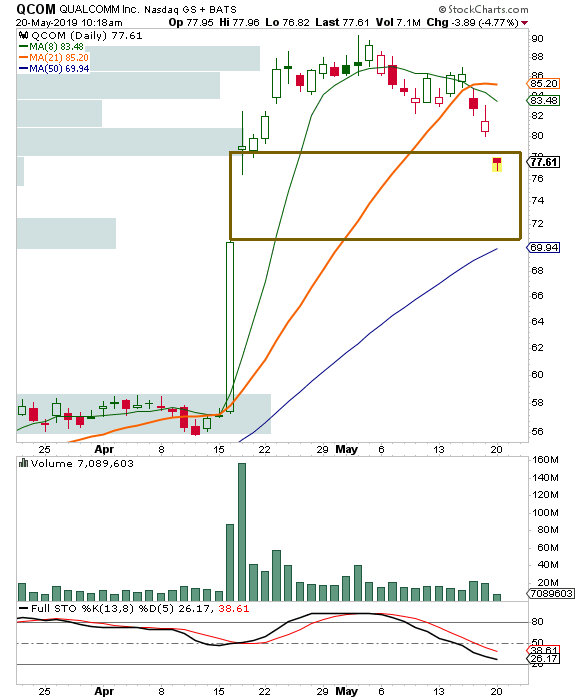 A close under that level and QCOM falls into the recent gap created on the positive reaction to the Apple (AAPL) settlement. The challenge with gaps is they leave an empty pocket lacking support. Everyone who bought after the Apple news and has held is basically under water now. Sure, there are a handful of folks that may have scooped up shares at the intraday low of a single day of the past six weeks, but that's semantics.

It's the psychological risk of price action that worries me this morning, but I'd focus on the closing price and not the intraday action. Buying right now, without seeing the close, feels like a greater risk to bulls than sitting on your hands for a day or two. That's my plan.

Get an email alert each time I write an article for Real Money. Click the "+Follow" next to my byline to this article.
TAGS: Investing | Markets | Stocks | Technical Analysis | Trading | Software & Services | Technology | Stock of the Day