Tesla (TSLA) announced on Saturday that the firm had delivered 241,300 vehicles during the third quarter despite the ongoing global shortage of automotive semiconductor chips. This number prints versus consensus view that was down around 221K. The firm also produced 237,823 vehicles in total for the three month period. Of that, 228,882 (96.2%) were of the Model 3 and Model Y varieties, and more affordably priced. The higher priced Model S and Model X vehicles accounted for the balance. These totals were up sequentially from 201,250 deliveries and 206,421 vehicles produced for the second quarter.

Readers may or may not have noticed that Saturday's press release came from Austin, Texas. As far as Tesla's website is concerned, the firm is still headquartered in Palo Alto, California. We knew that the firm had already begun building facilities in the state of Texas and that CEO Elon Musk had already moved to the Lone Star State. This all happened in response to as California's COVID-19 pandemic inspired shutdowns hit production at the Fremont facility.

While shortages have hampered operations in Shanghai where Tesla manufactures vehicles for the Asian and European (for now) markets, and with leadership in the state of California always less business-friendly... moving at least some portion of production to a more open jurisdiction in the U.S. was probably prudent from a business perspective. Going forward, if the firm's headquarters is also moved, one would think that there would be potential for significantly reduced tax burden.

As a matter of fact, Tesla plans to hold the firm's annual shareholder meeting near the still under construction facility in Austin this Thursday, October 7th.

The statement reads, "Our delivery count should be viewed as conservative, as we only count a car as delivered if it is transferred to the customer and all paperwork is correct. Final numbers could vary by up to 0.5% or more."

With Tesla sales heating up, with firms like Rivian and Lucid (LCID) already making U.S. sales, with legacy auto giants like General Motors (GM) and Ford Motor (F) making huge commitments toward the national and global transition from the combustible engine to electric power, there is going to be incredible stress placed upon the grid. President Biden has set a non-enforceable target of the year 2030 for half of all new vehicle sales to be electric, and in surveys, nearly 40% of Americans say that they would consider an electric vehicle for their next purchase/lease, so the time of crisis is coming.

We see incredible shortages of power causing rolling brownouts across China, but that is a coal problem, which is a problem in itself. If the world becomes far more electric, but relies upon coal to provide that electricity, have we accomplished much at all in terms of going green? Right now, about 1% of vehicles on U.S. roads are EVs, as most folks still drive older vehicles. The average vehicle on U.S. roads is about 12 years old as opposed to just nine years old a few years ago. The time is coming. We are not prepared.

Tesla earnings are still more than two weeks out, probably around October 21st. A consensus of the 21 analysts I can find that cover Tesla is for EPS of $1.43 on revenue of roughly $13.1 billion. These numbers would be good for year over year earnings growth of 88% on revenue growth of 50%.

It remains clear that while competition is clearly heating up in the space, that Tesla has built up something of a mote at least in terms of reputation as a first mover. My thought, and I am biased as a Ford shareholder, is that the real competition will come from that direction more than from other EV start-ups. Both GM and Ford have scales on their side, and in my opinion Ford sells cars and trucks that people want to buy. Just an opinion worth two cents.

Since Saturday, I have seen three five star (At TipRanks) analysts that all opined bullish on TSLA, though none changed their ratings or price targets. The three are Philippe Houchois of Jefferies, Ben Kallo of Robert W. Baird, and Dan Ives of Wedbush. All three have "buy" ratings on the stock. Ives still has a $1,000 price target, Houchois has a price target of $850, and Kallo goes with a target price of $764 (Yes, the shares are trading at $805). I am sure you have read by now that JP Morgan analyst Ryan Brinkman increased his price target to $215 from $180 while leaving his "underweight" rating in place. In am only looking at five star analysts in this piece and Brinkman does not qualify as such at TipRanks. 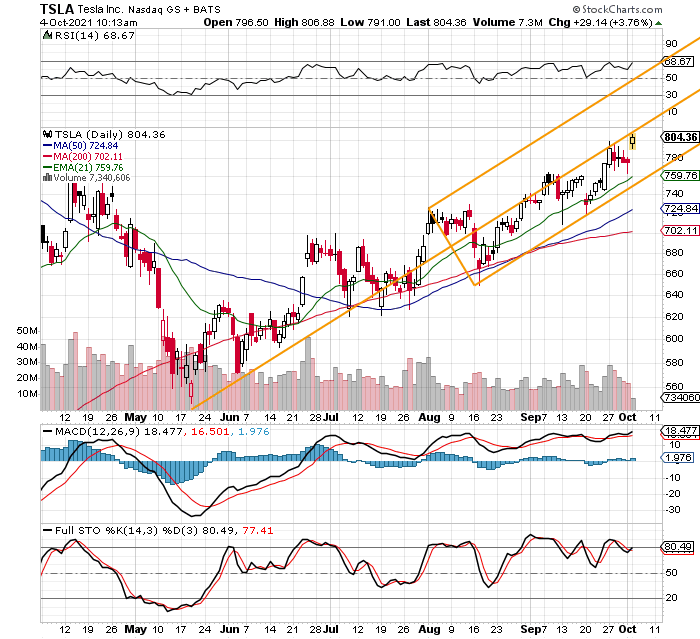 The shares appear technically overbought by a number of metrics, just as the price approaches the central trendline of our Pitchfork model. If the stock were not Tesla, I would expect resistance to show here. Given that the shareholders meet this week, and that the entire cult loves Musk, I would be real careful about shorting any shares at this level, despite the fact that interest is not really an issue for this name any longer.

Not to mention that earnings are less than three weeks away. Anything I do in this name this month is going to be in the options markets. I am thinking about going long an October 21 $795/$775 bear put spread for a net debit of roughly $7 trying to win back $20, for a net profit (if it works) of $13 or 185%. I have to see where the equity and associated options are priced once this piece hits publication.

Get an email alert each time I write an article for Real Money. Click the "+Follow" next to my byline to this article.
TAGS: Earnings | Investing | Markets | Stocks | Technical Analysis | Trading | Automotive | Elon Musk | Electric Vehicles