General Electric (GE) has successfully pulled itself off the trash heap. The process began back in November but with a solid earnings report on Wednesday morning, I think we can remove it from the dumpster. And 2020 could shape up to be a continuation of the turnaround, but "could" and "will" are two very different things.

The company delivered fourth-quarter earnings per share of $0.21, three cents ahead of estimates. Revenues of $26.2 billion edged past Wall Street's estimates as well. I'd point to three highlights for the company. First, the industrial free cash flow of $3.9 billion demonstrates the GE portfolio can still pull in cash. Second, $7 billion in debt reduction is a huge step in the right direction. GE managed a $12 billion reduction in assets, halfway to its two-year goal of $25 billion. Lastly, the aviation business is soaring. Sorry, I couldn't pass that one up.

Aviation revenue grew by 22% in Q4, pulling it into the black by 3% for the year. Despite Power being down 30% and Renewable Energy being down 11% in Q4, the company surpassed estimates. This demonstrates how meaningful aviation is to the company. Aviation revenues total more than the Power and Renewable Energy segments combined. It is also approaching 2x that of Healthcare.

For the full-year, only Renewable Power showed double-digit growth. Power was down while Aviation and Healthcare grew in the very low single-digits. Although GE Capital is mentioned in their press release, the division is a spec, inconsequential to either the top or bottom line.

Guidance for the full-year 2020 showed continued strength in free cash flow with some softness in earnings. Management guided full-year earnings in the range of $0.50 to $0.60 versus prior estimates of $0.66. Free-cash-flow between $2 billion and $4 billion is expected. Additionally, the company anticipates closing the BioPharma $21.4 billion sale to Danaher (DHR) in the first quarter. While selling BioPharma and the remaining stake in Baker Hughes will reduce cash flow and profits, the company needs to continue to reduce debt and strengthen its balance sheet.

While not in love with these numbers, we are seeing improvements. I'd be hesitant chasing the stock at these levels. Do you really want to pay a 25 or 30 P/E for a company growing in the very low single digits and still facing challenges? Add in the fact the full-year 2020 projections are dependent on the 727-MAX's return to service by mid-2020. Boeing (BA) says it will happen. The FAA is less certain, but what we do know is the "fix" has taken significantly longer than expected. To put a deadline in play for your full-year 2020 while trying to repair a broken reputation is dangerous. The last thing General Electric can afford is to come out on March 4th, it's next expected update, and guide numbers lower. Another delay in the 737-MAX could cause exactly that while a return mid-year likely won't result in any raised guidance. In other words, it's more risk than reward this way. 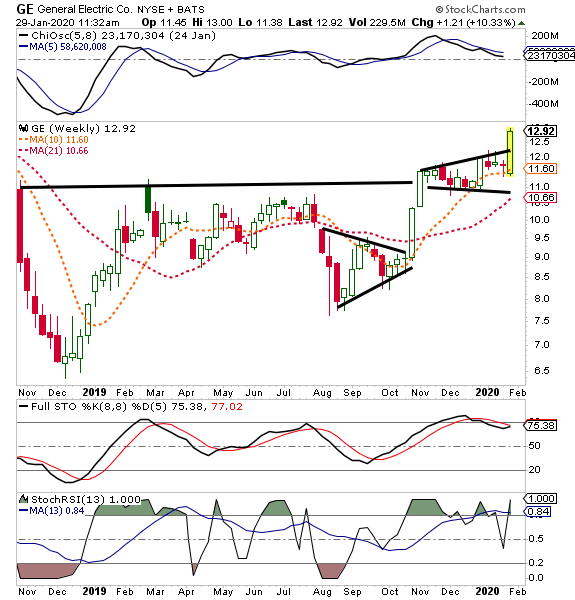 Technically, shares are strong. The breakout this week will firmly be in place with a close above $12.40 and a hold of that level next week. I look at $11.50 as the next support level. A weekly close under $10.65 puts the bears in charge and I would avoid the stock until it hits the single digits at that point. As I said, I wouldn't chase. I might consider a long trade on a test of $11.50 to $11.60 with a stop around $11.00. I don't see any hurry to get involved though as the 737-MAX still presents a big risk.

Get an email alert each time I write an article for Real Money. Click the "+Follow" next to my byline to this article.
TAGS: Earnings | Investing | Options | Stocks | Technical Analysis | Trading | Technology | Industrials | Stock of the Day