Tuesday night. Watching the Mets lose to the Cardinals. Watching a rerun of Star Trek Enterprise on Paramount Plus (which is an excellent streaming service, btw), and scrolling the business headlines. Wait! What was that? It jumped right out at me as I scanned for anything of interest. Microsoft (MSFT) increased the quarterly dividend a whopping 11%, and a new share repurchase authorization for up $60 billion in common stock. Hooray! We're rich! Wait. Microsoft doesn't pay that much of a dividend to begin with. Turn off Star Trek. Work to do.

Turns out increasing the dividend by six cents is a lot in percentage terms when the firm involved pays only $0.56 going in. Okay, now $0.62 per share per quarter. Forward yield of 0.83%. Better than nada. Better than a sharp stick in the eye. I was already all in as far as Microsoft was concerned when they were going to pay me $0.56, so I'll take it. Now, how about that buyback? Better get it in before the Dems want their 2% excise tax, right? Microsoft is a $2.25 trillion company so it's not like they are going to buy back the whole firm. That said, Microsoft could buy $60 billion worth of itself, or maybe buy the above-mentioned ViacomCBS (VIAC) more than twice. Hmm... how interesting is that?

What Am I Saying?

Basically, I am telling you that I am long Microsoft and remain bullish on that name. The dividend news and the buyback are nice, but not the reason that I am here, nor I think a good reason to initiate here. By the way, I am still long some VIAC as well, in full disclosure.

Listen, we're in this name because of the CEO, Satya Nadella. We're also here because Microsoft is always one step ahead, beating both earnings and revenue expectations quarter after quarter like a drum. In addition, with little exception, the firm maintains a level of excellence each and every quarter across every one of its business lines.

Remember as Microsoft's Azure competes with Amazon's (AMZN) AWS and Alphabet's (GOOGL) Google Cloud for internet supremacy, it's about a lot more than that hugely successful, high margin business. With Microsoft, you get exposure to gaming, business software, and evolving labor markets (LinkedIn), as the firm moves all of these businesses from a licensing sales model to a recurring revenue (subscription) model. Are you ever going to cancel whatever business software you are currently using? Not unless it breaks down, right?

Microsoft does not report the firm's fiscal first quarter financial performance until late October. Right now, Wall Street is around EPS of $2.07 on revenue of $44 billion. These numbers, if realized, would amount to earnings growth of 13.7% on revenue growth of 23.2%. One must remember, this is growth off of a pandemic year where demand surged, and the sales growth is actually an acceleration. Keep in the back of your mind too, that Microsoft almost always beats Wall Street as well. 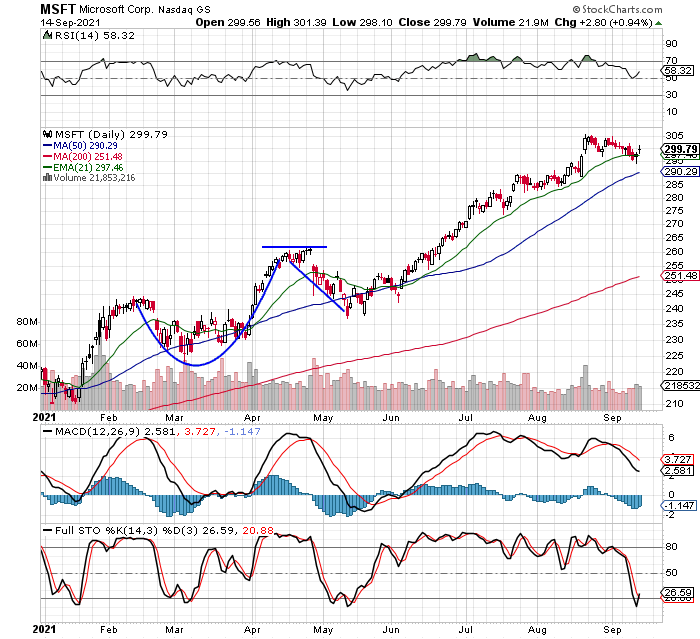 It might be easy to get shaken out of MSFT around here. I won't be. It may be difficult to grasp, but MSFT is still engaged in last spring's breakout of the cup with handle pattern that I have illustrated here for you. The shares have leveled off in August into September. The shares are struggling with their own 21 day EMA. The MACD looks weak, while the FSO (Full Stochastics Oscillator) is already expressing an oversold reading. The RSI disagrees.

My thinking is that traders may sell this morning's (Wednesday's) news on the pop. I will not be surprised at all to see MSFT pressure it's 50 day SMA, currently $290. What happens? That's where I add more. As far as I am concerned, the $263 pivot is still valid. I am up a lot of percent. I could take very nice profits here. I am not. My target price is $328.

(MSFT, AMZN and GOOGL are holdings in Jim Cramer's Action Alerts PLUS member club. Want to be alerted before Jim Cramer buys or sells these stocks? Learn more now.)