You May Have Noticed

I saw it at Bloomberg first. Apparently, the US. Health and Human Services Department was targeted in a cyber-attack on Sunday night. The attack is not thought to have taken any data from the department's network, but is believed to have been intended to slow down the agency's systems during this nation's response to the spreading coronavirus pandemic. For what it's worth, it is also believed that the attack that seems to have failed to slow down the department's systems in any meaningful way, had been perpetrated by a hostile foreign actor.

The point is that we, as a nation... have enemies. These enemies will try to harm this nation when this nation is perceived as vulnerable. Therefore, even while it may appear to a foreign enemy that their target might be distracted, that target, being us, must remain vigilant, and must be able to defend our nation's borders regardless of our internal situation.

It comes as a surprise, yet it doesn't. Lockheed Martin (LMT) closed on Friday, at $328.59, down 25.7% from the February highs, more or less in-line with the broadest large cap equity indices. On Monday morning, the shares were indicated roughly 10% lower, which also was more or less in-line with the other big names in Defense and Aerospace, such as Northrop Grumman (NOC) , Raytheon (RTN) , and General Dynamics (GD) . The news that surprised? Not the pressure on the shares at all. It was the action taken by CEO Marilyn Hewson, who held that role since 2013, as well as the role of Chairman since 2014. Hewson will step down from the position of chief executive as of June 15th to become Executive Chairman of the Board subject to her reelection.

Hewson will be replaced at CEO and President by James Taiclet, who resigned from these same positions at American Tower (AMT) in order to take the job at Lockheed Martin. It is Taiclet who took the helm at AMT in 2003 and over time turned the firm into multi-national large-cap out of what had been a largely domestic operation. Prior to taking on the mantle of leadership at American Tower, Taiclet had plenty of experience in the aerospace industry, having served as president at Honeywell (HON) Aerospace Services, and as a vice president at Pratt & Whitney, which is a unit of United Technologies (UTX) .

To point out that while federal spending will likely soar in response to the threat created by the pandemic, the government must remain mission-capable in terms of being able to respond to threats of all kinds. Prior to this outbreak, Lockheed Martin has been a central cog not only in the manufacture of fighter aircraft such as the F-22 Raptor or the F-35 Lightning, but also Air and Defense Missiles, Tactical Missiles, and Strike Weapons. This would include the development of Hyper-sonic Weaponry which has become a growing priority. The number of defense related businesses goes on the Rotary (Sikorsky), and Space (also involved in hyper-sonic development). If the need arises to defend, or take to offense, Lockheed is at least as important as any other firm in the nation.

On top of that, over the past 12 months, Lockheed produced $7.31 billion in operating free cash flow. The firm stands with a Current Ratio of 1.22 despite an awfully high debt to equity ratio. Basically, while I acknowledge that the level of debt is above my comfort zone, this firm has been a revenue and cash flow beast, and one whose largest customer, even if some of that customer's allies may have to back off fiscally, will likely have to be a more reliable client than what many large cap corporations across any number of industries will experience at least for the short to medium term. 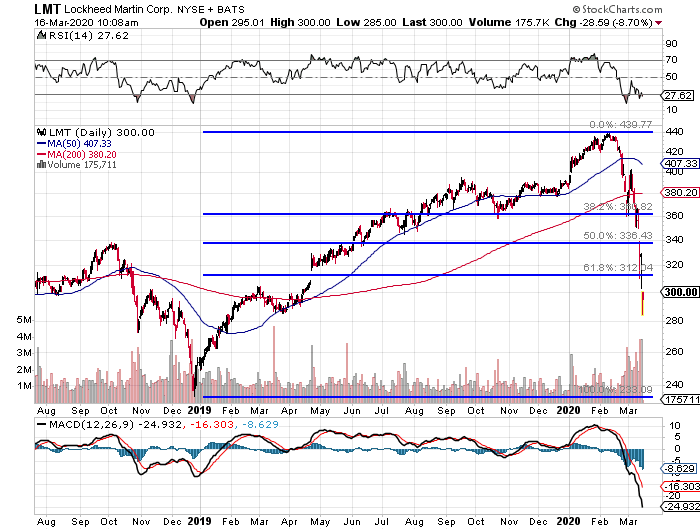 Had I written this article on Friday night, I might have pointed to the fact that after a wild fight, the shares had found some support at a 61.8% retracement of the December 2018 low through the February 2020 high. For my part, I am always involved in this name, but as with many of my positions, at this stage of a selloff, my long positions are fewer and much smaller. That means conversely that the cash position has now gone way beyond what would be considered to be "elevated."

So I enter the day with 1/16 of a position in LMT. Do I add here on today's dip? That would not be the craziest idea, to tack something on. I doubt it will shock anyone if I am not aggressive in this environment. That said, would it surprise anyone if the name retook that Fib level at $312 in the short-term, but still moved lower long-term with the industry as ETF flows continue to overwhelm individual corporate performance?

I could justify an add of just about 1/16 of a position. That said, I will have to cancel my $460 target price which has outlived its relevance in this environment. The $336 line would be more realistic.

(Honeywell is a holding in Jim Cramer's Action Alerts PLUS member club. Want to be alerted before Jim Cramer buys or sells HON? Learn more now.)

Get an email alert each time I write an article for Real Money. Click the "+Follow" next to my byline to this article.
TAGS: Investing | Markets | Stocks | Technical Analysis | Trading | Defense