Whoa. Do I owe Walmart (WMT) CEO Doug McMillon an apology for the opinion expressed in Tuesday's Real Money column? Not really. Walmart probably should have warned and the balance sheet still stinks. That said, the headwinds experienced by Walmart throughout the year's first quarter do not appear to have been better managed elsewhere. That comment was, perhaps, harsh.

Target (TGT) released that firm's first quarter financial results on Wednesday morning, and it does appear that ugliness, like lightning, can indeed appear twice.

Target posted GAAP EPS of $2.16, missing Wall Street's expectations by miles, on revenue of $25.17B. The sales print was good enough for annual growth of 4%, and did manage to beat Wall Street. Comparable sales grew 3.3% on top of 22.9% growth for the one year ago period. Traffic grew by 3.9%. Store comparable sales increased 3.4% on top of last year's 18% growth. Digital comparable sales increased 3.2% on top of last year's 50.2% growth. Operating margin of 5.3% was significantly below projections and down from 9.8% a year ago, driven by various margin pressures such as excess inventory building, actions taken to reduce inventories, and elevated freight & transportation costs. Where have we heard that story before? Operating income decreased 43.3% to $1.346B as gross margin dropped to 25.7% from an even 30% last year.

For the current quarter... Target expects operating income margin rate to be in a wide range centered around the first quarter print of 5.3%.

For the full year... Target continues to expect low to mid-single digit revenue growth and an operating income margin rate centered around 6%.

From the press release... Chairman and CEO Brian Cornell commented, "Throughout the quarter, we faced unexpectedly high costs, driven by a number of factors, resulting in profitability that came in well below our expectations, and well below where we expect to operate over time." This is where I may owe Walmart CEO Doug McMillon some eating of the crow, as I stated in yesterday's piece that while McMillon had been surprised by the business environment that I did not think that Brian Cornell would have been surprised.

Clearly both leaders were surprised and both admitted it before their individual public audiences. They are both honest and investors can count on that in the future. I was angry yesterday and it showed in what I wrote. That said, neither leader is exonerated from the fact that neither warned Wall Street ahead of these earnings releases when quite obviously... both should have.

Cornell went on... "Despite these near-term challenges, our team remains passionately dedicated to our guests and to serving their needs, giving us continued confidence in our long-term financial algorithm, which anticipates mid-single digit revenue growth, and an operating margin rate of 8 percent or higher over time."

At the close of the three month period ending April 30th, Target had a net cash position of $1.112B and held inventories marked as worth $15.083B. This brings current assets up to $17.953B. Total liabilities printed at $20.724B. That puts the firm's current ratio at 0.87, dropping this ratio below the 1.0 level which is fundamentally important. Omitting inventories from the equation, the firm's quick ratio stands at an absolutely ghastly 0.14. I know, quick ratios are not quite as focused on in retail as they are elsewhere as inventory building is part of the game, but I think at this time, the values of said "bloated" inventories has to be treated as subject.

Target's total assets add up to $50.842B that includes no entry for "goodwill" or any other intangible asset. That's to the firm's credit as the brand is very well known and there surely is some significant intangible value in the brand name alone. Total liabilities less equity amounts to $40.068B. This includes long-term debt and other borrowings of $11.509B. Obviously, I think that the debt-load is a bit high relative to cash on hand. Like with Walmart, this balance sheet does not pass the Sarge test.

On Tuesday, I wrote to you that I was engaged in the process of exiting my long position in Walmart and considering entering into long positions in both Target and Costco (COST) with the proceeds. Well, I had a tougher time getting out of WMT than I expected. I am only about 40% of the way there. The silver lining in that is that I have initiated nothing in either TGT nor COST.

I really am stunned by the hits to the quality of the balance sheet that both Walmart and Target have suffered. Honestly, I don't want to be in either one of these names as an investor, even at these huge and sudden discounts. I have no problem trading either one of them, as trading is far more mercenary in nature than is investing. Traders get paid for their skill-sets. Investors must plant a flag and that is dangerous, especially when talking about falling knives like these. 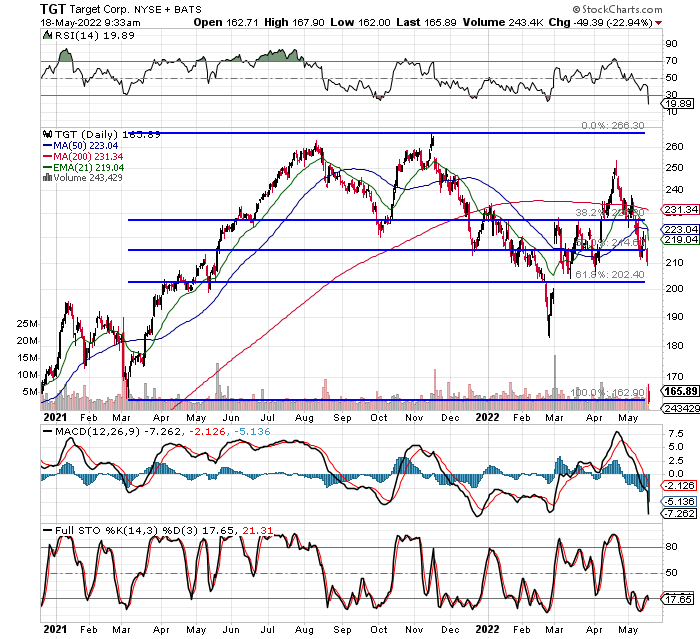 Maybe COST? Costco reports next Thursday. A $455 / $465 May 27th COST bull call spread that can be had for $5 or less sounds interesting.

(WMT and COST are holdings in the Action Alerts PLUS member club. Want to be alerted before AAP buys or sells these stocks? Learn more now.)

Get an email alert each time I write an article for Real Money. Click the "+Follow" next to my byline to this article.
TAGS: Earnings | Economy | Investing | Stocks | Technical Analysis | Trading | Retail