AbbVie (ABBV) isn't receiving a warm welcome from the market for its announced buyout of Allergan (AGN) . The stock was trading down 14% in the early going on Tuesday morning as traders analyze the proposed $63 billion takeover. For Allergan shareholders, it is a lifeline for a stock that has lost one-quarter of its value over the past year. The stock is only back to November highs despite being up 27% this morning.

The technical picture on AbbVie is horrible. Well, potentially. A lot will depend on how the second half of the way shakes out, but if the stock closes under $70, there are bearish patterns in play that might keep bulls out of the ring for a few months. The stock already lost 14% year-to-date and experienced an Allergan-like drop over the past year. ABBV has returned to its levels of 2017. In a bull market, that isn't a great look. The most unfortunate thing is the stock appeared ready to reverse the recent bearish action. A weekly close under $80 would have put shares above the 10-week simple moving average (SMA) and 21-week SMA. Additionally, momentum and trend indicator were set to trigger bullish signals, but today's action will most likely take everything off the table by Friday. Based only on the weekly chart, I would expect the stock to get stuck in a wide trading range for the remainder of the year that oscillates between $64 and $74.

The deal itself is similar to the structure we saw yesterday in the casino industry. About 2/3rds of this deal is cash with the other 1/3rd coming in the form of stock. Based on the mid-morning trading prices of both stocks, Allergan is trading at a discount of 8.6% to the buyout price, but remember AbbVie pays a rather large dividend of $4.28 versus Allergen's $2.96 per share. With the deal not set to close until early 2020, it means our current discount falls in the mid 7% range rather than mid 8% range. That still falls on the high side of the discount side for a 9-month deal.

With no other bidder expected to emerge, this is a high risk arbitrage play. An example of an arbitrage play here is buying Allergan and shorting a proportionate share of AbbVie. The problem here is if the deal falls apart, the immediate downside of AGN is big. A reversal to a situation in which the company splits up rather than sells itself will take time. While AbbVie would likely pop some, I wouldn't expect it to regain all of what we've seen lost today though. With today's move, AbbVie has reinforced the concern of Humira facing increased competition in 2023.

Humira currently generates the majority (above 50%) of revenue for AbbVie. The company acquired Pharmacyclics in 2015 to add Imbruvica and Venclexta to its pipeline, and it followed that with a recent partnership with Neurocrine Biosciences. Additionally, AbbVie has its own pipeline with a plaque psoriasis drug already approved and a treatment for rheumatoid arthritis expected in the third quarter of this year. All combined, I'm not sure if these will all equate to the current sales of Humira. So, why  AGN may be a bit of a reach, there is a reason for it.

Synergies are a natural cost reducer, especially in the pharma and bio-science arena. Sales, marketing, and central support often have been overlaps as well as R&D. AbbVie sees a $2 billion saving here. Unlike many other buyouts, this one is expected to be accretive in its first full year to the tune of 10%. At its peak, AbbVie management expects the deal to add 20%. With $48 billion in revenue expected along with operating cash flow above $20 billion, the combined companies would have a chance to reinvent itself. Also, AbbVie would get to diversify its risks away from Humira. 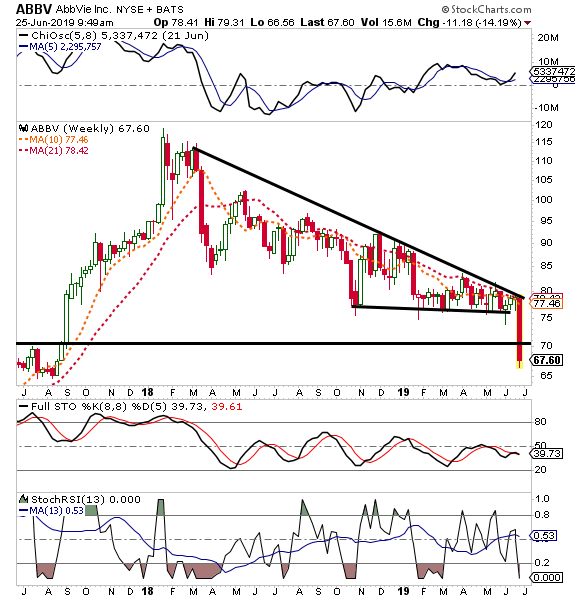 AbbVie has become known for its huge nearly 6% dividend. After this deal, it sounds as though the new company would go after debt reduction, aiming to cut $15 - $18 billion in debt before the end of 2021. I'd temper any hopes of a dividend increase. In fact, I'd expect the yield to come under 5%.

The biggest winner out of this may be Perrigo as it immediately comes into play as a buyout candidate. As for AbbVie and Allergan, I believe they need each other. Despite the initial negative reaction in AbbVie's price, I expect the deal to get approval. The company needs to de-risk from Humira and Allergan offers a logical avenue. I'd be willing to risk a small percentage (1-2%) on Allergen and about half as much on AbbVie here.

Get an email alert each time I write an article for Real Money. Click the "+Follow" next to my byline to this article.
TAGS: Mergers and Acquisitions | Investing | Markets | Options | Stocks | Technical Analysis | Trading | Pharmaceuticals