In a column on Real Money yesterday, Jim Cramer said that once enough people are vaccinated, the world can finally go back to normal. When that happens, we'll finally know which of our pandemic behaviors are here to stay -- case in point, direct-to-consumer or DTC retail.

Why go to the store for simple items when they can be delivered right to your home? asks Cramer. This has him expecting big online sales numbers from Nike (NKE)  when it reports later this week.

Let's check out the charts of NKE again here. We looked at NKE back on Oct. 21 and wrote that, "NKE is still in an uptrend, with a possible $145 price target based on the weekly Point and Figure chart. The indicators have been weakening, so the best strategy I think is to raise sell-stops to $122 and look to be a scale-up profit taker towards $145 if available."

In this updated daily Japanese candlestick chart of NKE, below, we can see that prices are approaching our $145 price target. NKE is above the rising 50-day moving average line as well as the slower-to-react 200-day moving average line. Trading volume has been uneventful when increasing volume would be more appropriate. The On-Balance-Volume (OBV) line was flat from August into November and now the line has finally made a new high, which is not the strongest performance. The 12-day price momentum study shows lower highs from October to December telling us that the pace of the rally has been slowing. This is a bearish divergence when compared to the price action making higher highs.

In this weekly Japanese candlestick chart of NKE, below, we see some caution flags. Last week's candle pattern looks like a gravestone doji, which is a bearish pattern. The OBV line finally made a new high for the move up, breaking the high of early this year. But this is not a strong endorsement of the rally. The 12-week price-momentum study shows a weakening picture the past three months.

In this updated daily Point and Figure chart of NKE, below, we can see a new higher price target of $168. 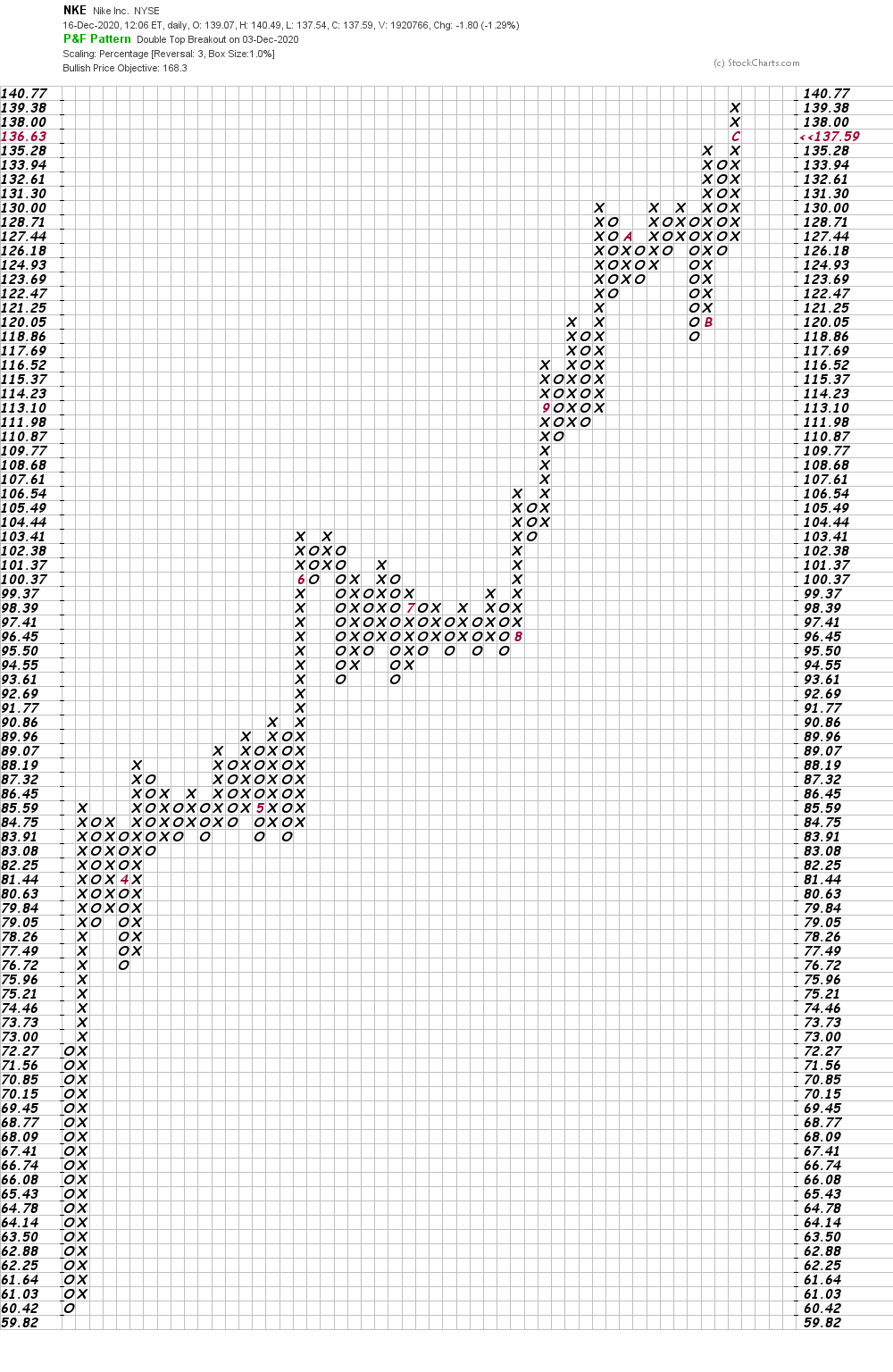 Bottom line strategy: Back in October we recommended that traders become scale up profit takers on approach to $145. Even though today's Point and Figure chart shows a potential $168 price target I would stick with the original strategy as momentum has slowed.

(NIKE is a holding in Jim Cramer's Action Alerts PLUS member club. Want to be alerted before Jim Cramer buys or sells this stock? Learn more now.)

Get an email alert each time I write an article for Real Money. Click the "+Follow" next to my byline to this article.
TAGS: Investing | Technical Analysis | Apparel | Mad Money | Earnings Preview