We last reviewed the charts and technical indicators of CrowdStrike Holdings (CRWD) on February 24 and recommended to traders, "CRWD has turned to the downside so traders and investors should take their profits and go." CRWD has declined into early March and is bouncing a bit.

Is the correction over? Or is there risk of more downside? Let's visit with the charts again.

In this updated daily bar chart of CRWD, below, we can see that prices have found a little buying interest (support) in the $180-$165 area. CRWD is bouncing up but is still below the declining 50-day moving average line. This bounce could fail like the late February bounce but let's look further.
The $150-$120 area is probably a better area of support where prices stalled from September to the end of November. The bigger a support or resistance area/zone the more significant it becomes (also the more recent the pattern the more important - support or resistance from two years ago is more psychological than actual).
The On-Balance-Volume (OBV) line has stalled out and rolled over since late December. If the OBV line is turning up again it is too soon to say.
The trend-following Moving Average Convergence Divergence (MACD) oscillator has fallen below the zero line for an outright sell signal. If CRWD continues to rebound the MACD oscillator will first cross to a cover shorts buy signal. That could be several days away.

In this weekly Japanese candlestick chart of CRWD, below, we can see the top reversal pattern in early February. A bottom pattern like a hammer or a bullish engulfing pattern is not visible. Prices are still above the rising 40-week moving average line.
The weekly OBV line has been rolling over the past three months. The MACD oscillator shows a downside cross for a take profit sell signal.

In this daily Point and Figure chart of CRWD, below, we can see the distribution (selling) going back to January (look for the "1" on the chart). We can see the break down from the top pattern and also the recent rebound (see the "O's" and then the "X's"?). The software is projecting a very bearish price target of $110 but a rally to $232 would likely turn the chart bullish. 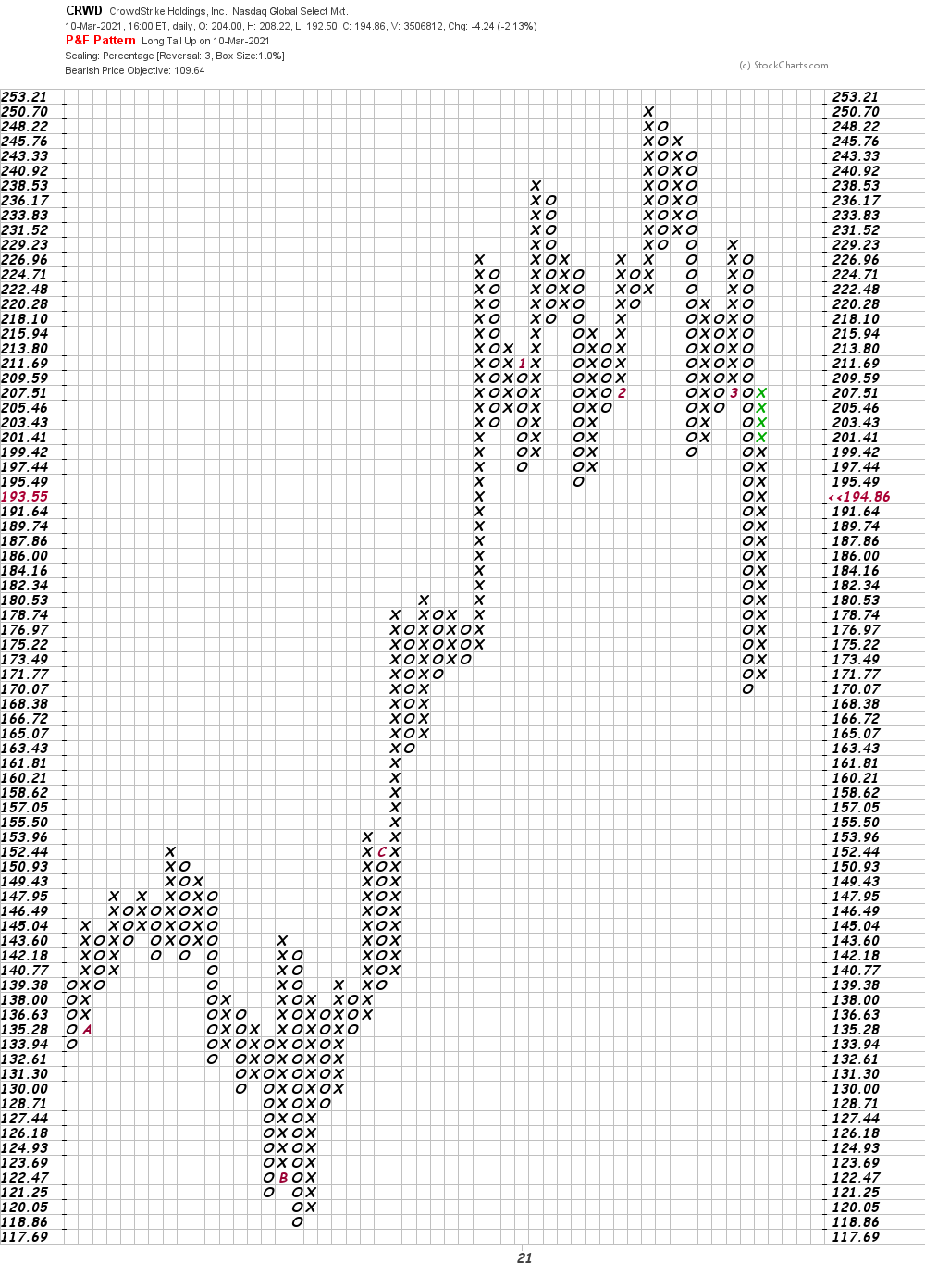 In this second Point and Figure chart of CRWD, below, we tortured the data to give us a bullish chart. We used weekly close only price data with a traditional even dollar scaling. Here the software shows a price target in the $268 area.

Bottom line strategy: So here is where technical analysis can get tricky. We have charts and indicators that suggest further declines in the weeks ahead but we have a secular bull market where so many traders and investors are convinced you need to "buy the dip".
Buying the dip makes sense early in a cyclic bull market and early in a secular bull market. But I would argue we are not now early in either.
My strategy suggestion is that we should give things a little more time. I know no one makes money when they are out of the market but I hate having the other shoe drop.
Get an email alert each time I write an article for Real Money. Click the "+Follow" next to my byline to this article.
TAGS: Investing | Stocks | Technical Analysis | Trading | Cybersecurity | Software & Services | Technology