Last Of My Breed

I am a career trader who has served several broker-dealers over the years in positions bearing the word "economist" in the title. That's not meant to be good or bad. What it means is that I think. A lot. I read. A lot. And as you likely realize by now... I write opinion. Often.

I am no longer a young man. Nearly all of my mentors have long since retired. Some of those I have mentored have long since left the industry. The point I am trying to make is that my methods are old school. I still use marble notebooks to record data. In pencil. I will read the news in real time off of the internet, but I prefer to read actual newspapers. Lastly, I print out a lot of information. I use a lot of paper. I go through highlighters faster than a college kid, and lastly... I spend a lot of dough on ink cartridges. HP (HPQ) ink cartridges to be precise. I am... the "last of my breed."

It was back in late August, the 22nd to be exact, that HPQ reported the firm's third quarter financial results. The results were not awful. Earnings beat expectations, and so did revenue despite this being the second consecutive quarter of virtually no growth over last year's sales. Therein lies the problem. Sales have been steady but really have run sideways for two years. Back to that third quarter. Segregated by business line, the printing giant missed consensus across several key areas.

Printing revenue, Supplies (where the margin is), and Consumer Hardware all disappointed individually. In addition, CEO Dion Weisler announced that he would be leaving the post due to a family matter. Weisler will be replaced as chief executive by Enrique Lores come November 1st. Lores is a 30 year veteran of the firm who had most recently been the president of Printing, Imaging, and Solutions.

Over the days that followed, downgrades and lowered price targets would follow from the likes of Evercore ISI and Bernstein. For the record, those two analysts happen to be Amit Daryanani and Tony Sacconaghi... both rated solidly at five stars out of five at TipRanks.

Thursday (yesterday) brought HPQ's annual investor meeting. The firm announced plans to cut between 7,000 and 9,000 positions, or at 8,000... 14.5% of the entire company in a massive restructuring meant to save the firm a cool $1 billion over the next three years. The plan also includes a shift in direction geared more toward printing services.

Not only does the business world rely less upon printed material in this more digital age, but competition, cheaper competition from abroad to be exact, has taken it's toll on the firm's performance. Apparently, customers will end up with a choice on the hardware side where they can pay less for a printer that will only accommodate HP cartridges, or pay more up front for printers that will be able to function with cartridges manufactured by the competition.

In making these changes, the firm expects to take a $100 million fourth quarter charge, and expects the news structure to provide free cash flow generation of $3 billion for fiscal year 2020, while changing guidance of that year's non-GAAP EPS to a range of $2.22 to $2.32. Consensus had been for $2.24. This morning (Friday), after this investor day, Loop Capital's Ananda Baruah (also five stars) downgraded this name from a "Buy" to a "Hold", while reducing his target price from$21 to $19.

My own thought on this is quite simple. In the short to medium term, of course reducing headcount might at first ease expenses. Then again... the decline of this business is probably not a temporary situation. While I will continue to run my business the way I always have, there is a strong likelihood that whomever comes up behind me so to speak will run his or her business differently.

However, as a potential shareholder, my interest is piqued. Why? Simple. For one, the shares, at $16.78 are now trading at a 9.5% discount to Thursday night's close. Secondly, and this is no small thing... the firm also expressed an interest in returning 75% of that free cash flow to shareholders. At this last sale, the $0.64 annual dividend yields a somewhat attractive and sustainable 3.81%. A place for HPQ in a portfolio with a mission statement geared toward driving revenue might not be a terrible idea.

As readers can easily see, the shares have not traded this low since early 2017. 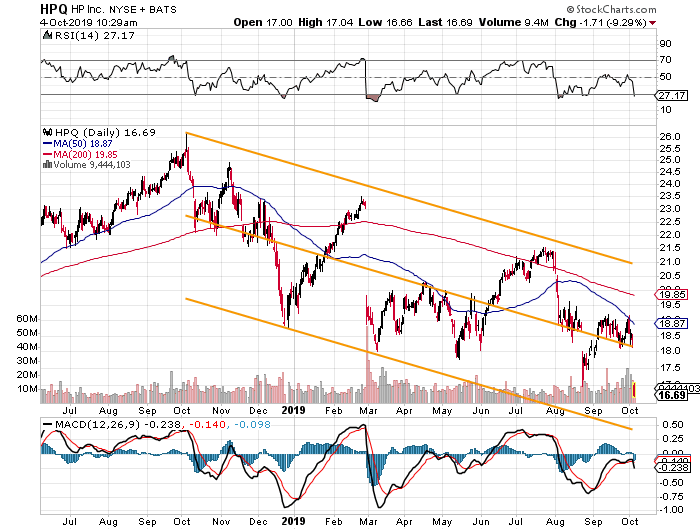 There is not a lot to like here. Since October of 2018, this stock has handed investors nothing but lower highs coupled with lower lows. The stock carries a very weak reading for Relative Strength, while the daily MACD offers little in the way of help. The shares might need binoculars in order to spot the stock's own 50 and 200 day simple moving averages.

Call me crazy, but this stock looks so bad, I think I'm going to buy just a little right in here, and then a little more when I see a basing pattern. Do I think this is a bottom? I really have no idea. Actually I doubt it, but the darned stock at 7 times forward looking earnings may just prove to be one of those accidentally defensive names that provides upside should the economy not descend into recession. Call it a risk/reward proposition. Just keep the risk smallish. The options market does not provide enough juice to get creative so if one goes there, this is an equity play. Earnings are due November 21st.

Get an email alert each time I write an article for Real Money. Click the "+Follow" next to my byline to this article.
TAGS: Investing | Stocks | Technical Analysis | Trading | Technology | Consumer Products | Stock of the Day