HP Inc. (HPQ) Chairman Chip Bergh could not have been more clear. The offer made earlier this week by Xerox (XRX) would leave the combined firm "burdened with an irresponsible level of debt and which would subsequently require unrealistic, un-achievable synergies that would jeopardize the entire company."

What had Xerox offered exactly? On Monday, Xerox offered to acquire all outstanding shares of HP Inc. for the equivalent of $24 in value (up from a previous $22 bid)... $18.40 in cash, as well as 0.149 share of XRX for each one share of HPQ (a take-over bid of roughly $35 billion). It should be noted that HP's market cap comes to more than $31 billion, while the smaller Xerox runs with market capitalization of just more than $7 billion. The proposed deal does have the blessing of famed investor Carl Icahn who has exposure to both firms.

In late February, HP Inc. reported the firm's fiscal first quarter performance. The firm beat easily on EPS, but missed revenue projections just slightly on a small year over year contraction in sales. In that earnings call, HP increased its FY 2020 EPS forecast to $2.33-$2.43, well above consensus of $2.27, and moving the lower bound of the new range above the upper bound of the firm's prior guidance. The firm also announced an increase in its share repurchase program to $15 billion from $5 billion as it works to block Xerox from taking control. The firm plans to return a rough $16 billion in capital to shareholders between FY 2020 and FY 2022.

On the surface, it would appear that both firms operate in areas of the technology space considered to be in decline. Xerox is a manufacturer of copiers and commercial printers. The firm drives sales through leasing or renting these machines to businesses, and then through servicing these products. HP, as most readers know, drives revenue through the sale of personal computers, printers, and supplies (such as ink cartridges) for those printers. The printer business is the driver of margin performance for this firm.

On the proposed deal, HP received opinion from both Goldman Sachs and Guggenheim Securities that expressed a level of inadequacy. Chairman Bergh added, "The Xerox offer undervalues HP and disproportionately benefits Xerox shareholders at the expense of HP shareholders." 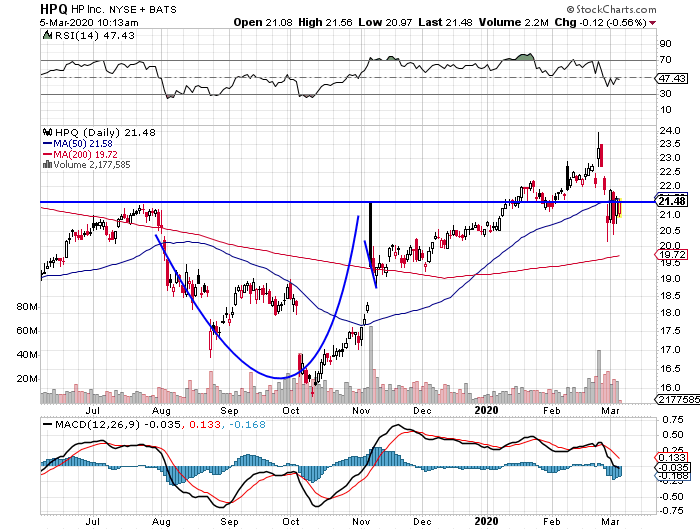 Interestingly, the shares have now fallen below the pivot provided by the cup with handle pattern created last summer into Autumn. Just as interestingly, that spot lines up neatly with the firm's 50 day SMA, and this area has indeed acted as recent resistance.

One has to think that the shares can make new highs if this 50 day SMA can be retaken, and that this can happen if Xerox (or anyone else) once again sweetened the pot. Without offering price improvement on such an acquisition, it becomes more than likely that these shares test the 200 day SMA ($19.72) at some point in the near future.

Oh, one other thing, I did look out three months to see if there was maybe an intelligent way to play this name through the options market. The fact is that HPQ options are really not very liquid. The volumes are low, and the spread between bids and offers make putting on a spread intelligently something of an adventure. For me, this would be strictly a play on equity, and I am not interested unless I see a deep discount, or a move above that 50 day on momentum. The weak tape, and economic backdrop in this environment, make for a narrower book, not a broadened exposure based on either a higher potential take-over price or an increased share repurchase program. I'm taking a pass.

Get an email alert each time I write an article for Real Money. Click the "+Follow" next to my byline to this article.
TAGS: Investing | Options | Stocks | Technical Analysis | Trading | Commercial & Professional Services | Consumer Products | Stock of the Day

BMY is breaking out to a new high.