You might recall that I last wrote to you on HP Inc (HPQ) back on October 4th. That was the Friday after the Thursday when the firm held their last investor day. Recall that the firm has not performed extraordinarily well. Two consecutive quarters (very nearly three) of virtually no year over year revenue growth. Disappointing business segments. A CEO announcing a need to leave the post due to a family health matter. Then, the announcement of a massive restructuring that would include plans to take a $100 million fourth quarter charge as well as a reduction in headcount of between 7K and 9K individuals, or at the mid-point... 14.5% of the entire firm.

Do you remember what I wrote to you at that time? In my trade idea, I wrote the following:

Call me crazy, but this stock looks so bad, I think I'm going to buy just a little right in here, and then a little more when I see a basing pattern. Do I think this is a bottom? I really ave no idea. Actually I doubt it, but the darned stock at 7 times forward looking earnings may just prove to be one of those accidentally defensive names that provides upside should the economy not descend into recession. Call it a risk / reward proposition.

That I did. My entry point that day was $16.51. Apparently, the folks at Xerox (XRX) as well as an individual by the name of Carl Icahn also saw the shares as cheap at that level. As most of you likely know, on November 6th, Xerox made a $22, mostly cash bid for HP Inc. That was the day I sold that position at $20.29, which was actually poor execution if you look at the chart of that day. Regardless of the sloppy out, this was a good trade though.

News breaks this morning (Monday) that HPQ's board of directors has unanimously rejected the $22 bid made by Xerox. In the firm's letter to Xerox CEO John Visentin, the HPQ board cites both that firm's debt levels as well as the declining business model. Actually a business model in decline is probably something that both firms understand well.

I believe it is for that reason that perhaps HP did leave the door ajar for a better deal should that opportunity arise. There probably are synergies that might at least provide a savings on the expense side, or Carl Icahn would not be into Xerox for more than 10% of the firm, or into HPQ for something in the neighborhood of a $1.2 billion stake. 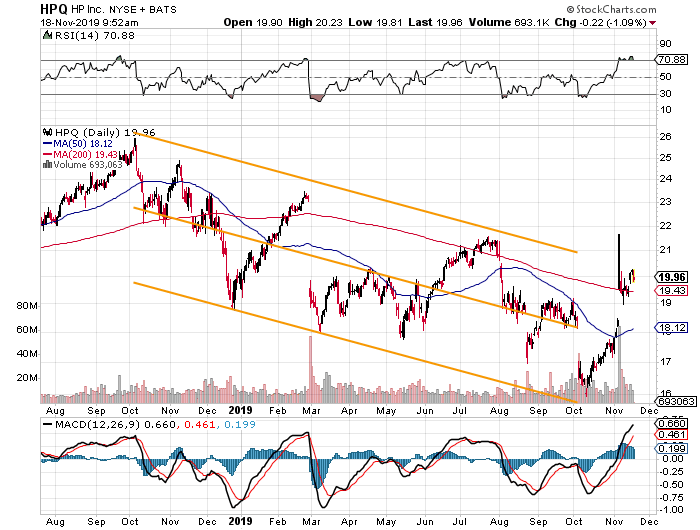 My thought is that I probably do not get back into this name on this Monday morning discount, but they do have my attention. Do these shares head right back to $16 and change without a deal? I think they probably do. With Mr. Icahn, even lower. I really do not have an interest at this time until the shares get in between the 200 day SMA at $19.43, and the 50 day SMA at $18.12. If tempted, don't forget HP Inc. will report the firm's fourth quarter performance next Tuesday.

Right now, HPQ February $19 puts are valued at roughly $0.60, but they are not trading and getting a fair price might be tough. Should the last sale for the equity get below that 200 day line, and do it soon... my thinking is that these puts might just pay more than they should. For a little while. Otherwise, I find something else to do.

Get an email alert each time I write an article for Real Money. Click the "+Follow" next to my byline to this article.
TAGS: Mergers and Acquisitions | Earnings | Investing | Options | Stocks | Technical Analysis | Trading | Software & Services | Technology Hardware & Equipment | Stock of the Day

Jim Cramer: In Retail, Darwin Reigns Until We Shut Down Covid-19

The main takeaway as always is that the real casualties are those enterprises that aren't public.

In the vast middle, there is a mishmash of action and rotation.

These well-known names are displaying both technical and quantitative deterioration.