I'll admit when I heard Xerox (XRX) might be making a bid for HP Inc.  (HPQ) , I laughed a little on the inside. I didn't see any way a $30 billion company with a history like HP would agree to move under the wing of an $8 billion company that's somewhat of an afterthought in tech and business today. Therefore, I wasn't surprised to see HP reject the $22 per share offer from Xerox, but I don't think this is game over. And after looking at the numbers, I'm not sure a combination is such a bad idea. I do think the optics of a "merger of equals" may help HP save face a bit. And I wouldn't be shocked to see HP try to turn this around as a takeover of Xerox. Carl Icahn is a common factor in this equation.

Icahn holds a stake in both companies after recently acquiring 62.9 million shares in HP. He's pushing to get a deal done, and I believe he has a longer-term vision in mind. It's unlikely a small pop in HPQ shares will net out a huge gain given I'd expect some hit on Xerox shares. Icahn is likely eyeing the potential benefit of $2 billion in possible synergies between the two companies. Additionally, their portfolios are viewed as largely complementary, so the worry about one part of the business cannibalizing the other part is low.

Xerox's current bid is roughly 10% above the current valuation of HP, which HP calls "not even close", according to CNBC. With $14 billion in revenue last quarter, $0.58 per share in earnings, and free cash flow of $2.2 billion, I understand where they are coming from here. Xerox is offering less than 1x sales and roughly 4x free cash flow. Xerox is likely attracted to the cash flow given its aggressive buyback of shares recently. The company completed $386 million in buybacks last quarter alone, and $600 million on the year.

HP has expressed concerns regarding the declining revenue at Xerox although HP has been struggling itself to find growth. They both have maintained profitability, strong cash flow, and aggressive buybacks, so together one might be inclined to believe those buybacks would continue at an aggressive pace. I believe that's what Icahn sees here. 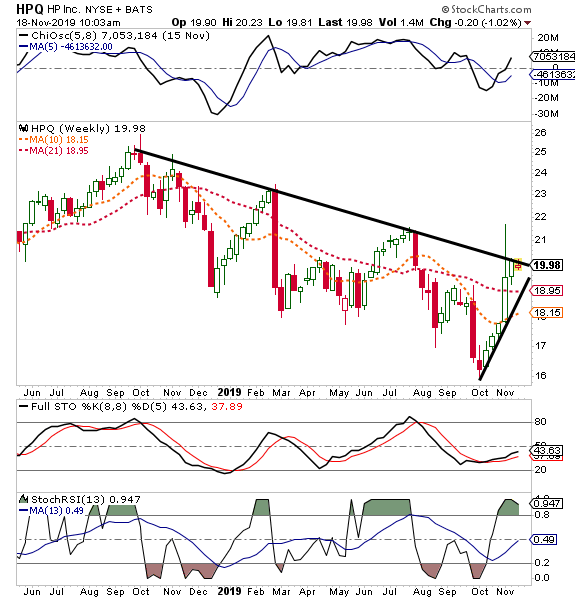 Above $20 potentially triggers a breakout on the weekly chart of HPQ. Shares hit a new lot in October, so the bounce from $16 to $20 has created a bit of a short-term overbought condition in the StochRSI; however, after trending lower for 12 months, the Full Stochastics is nowhere near overbought and we're seeing some strength in the Chaikan Oscillator.

Overall, I like HPQ, even here. I believe the deal has merits. At the very least, expect Xerox to come back with a higher bid, maybe in the $25 range. That should be enough to get a second pop in HPQ shares. With Icahn involved on both sides, like a realtor acting as both the listing agent and the buyer's agent, we can expect him to lean heavily on both Boards to come to an agreement. If a deal fails, I wouldn't be surprised to see both companies announce even more aggressive buybacks.

Get an email alert each time I write an article for Real Money. Click the "+Follow" next to my byline to this article.
TAGS: Mergers and Acquisitions | Investing | Stocks | Technical Analysis | Trading | Stock of the Day

As Momentum Slows, Some Small-Cap Pruning Is in Order

Many of the smaller stocks I favor have not reported earnings yet and I'm cutting them back.

Trust Your Gut (Experience) When Trading: What Mine Is Telling Me Now

The market hates lucky traders. Following your instincts is so you can sleep at night.