Way way back in 1974 I took a course in technical analysis with Ralph Acampora, CMT at the New York Institute of Finance. Ralph exposed us to chart patterns, indicators and the logic behind the oldest form of investment analysis.

One chart formation we learned about was the triangle pattern.
Triangles play out over several weeks or even months. They should be regarded as pauses in the longer-term trend of prices and prices should continue the trend before the pattern appeared.
Triangles are continuation patterns. With the Dow Jones Industrial Average (DJIA), chart below, we can see the pattern forming since October.
In the 1920s and 1930s triangles and a sister pattern called "coils" were considered one of the most important chart patterns by R.W. Schabacker the then editor of Forbes. Today, triangles in current technical literature seem to agree on three forms -- ascending, descending, and symmetrical.
In this chart of the DJIA, below, we see a symmetrical or equilateral triangle. There is a rising demand line and a falling supply line. Prices swing up and down in a narrowing pattern of higher lows and lower highs.
An ascending triangle has a rising demand line but a horizontal supply line. A descending triangle has a declining supply line and a horizontal demand line.
With this symmetrical triangle supply and demand are more in balance than the ascending or descending triangles. Trading volume typically decreases through the pattern as the ability to make money on the shorter and shorter up and down swings diminishes. The height of the pattern at its widest part is a guide to its potential price target when added to the breakout point.
View Chart »  View in New Window » 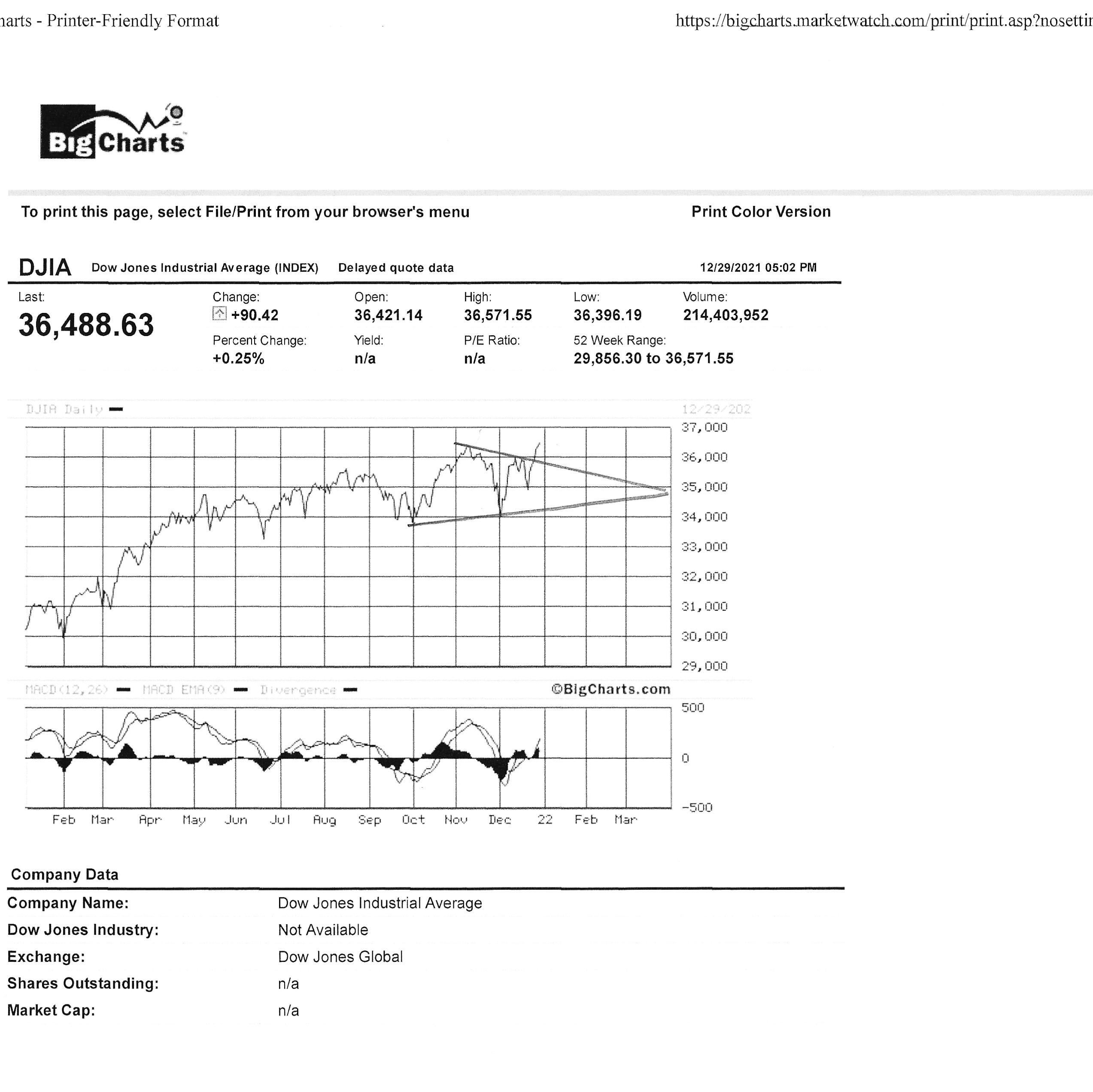 There are two other things about triangles that I learned from Ralph Acampora. One was that large triangles are typically seen late in a stock's advance and as a rule of thumb that when you do see a large triangle it can mean that 75% of an advance is behind us.
Second, the point where the apex would have occurred can be a peak in the case of a triangle in an uptrend. In this chart of the DJIA, above, the apex is in late March.

In my 2022 forecast posted on Dec. 9 I wrote that, "The major averages are quickly rebounding now and may even go on to make slight new highs in the weeks ahead but a strategy of taking profits into available strength the next two months is going to be my guidance."
As the new year unfolds I am going to work with a strategy of keeping close watch on leadership stocks and the major averages using the quick-turning candlestick charts. I will be looking for upper shadows and bearish divergences from my favorite indicators.
Traders interested in knowing more about chart patterns could look for my book "Chart Patterns" available on Amazon.
Get an email alert each time I write an article for Real Money. Click the "+Follow" next to my byline to this article.
TAGS: Investing | Technical Analysis