Perhaps the week's most anticipated earnings release, and there were quite a few of high enough profile to choose from, hit the tape past night. I speak of Nvidia (NVDA) . The stock ran into the earnings release, which is something that I, as a shareholder, never relish. That said, Nvidia had a very nice quarter, and remains central to the development of just about everything important. Then again, that's just my opinion, and I am biased. Let us take a look.

For the first quarter, Nvidia posted adjusted EPS of $1.80, which beat expectations comfortably while good enough for earnings growth of 105%. Revenue grew 38.7% year over year, landing at $3.08 billion, also a beat of consensus. Looking inside the numbers, Gaming remains the biggest fish in the sea, but it is getting closer. Gaming revenue printed up 27% to $1.34 billion, while the Data Center simply exploded in the pandemic impacted environment 80% to $1.14 billion. Moving toward the smaller business segments, Professional Visualization increased 15% to $307 million, and some of the same forces that propelled demand for Data Center services negatively impacted demand from the Automotive space. That line contracted 7% to $155 million.

The big news this quarter for Nvidia was the closed deal (finally) to acquire Mellanox. This is how the firm's elite businesses will present as a network. This is how the data center, artificial intelligence, machine learning come together as a cloud offering with an ability to provide scale to clientele. Mellanox performance moving ahead will be rolled into the Data Center.

On The Data Center

Let's face it. For business, this is where the action was pre-pandemic. Now, moving businesses toward an ability to maintain productivity from anywhere is not only luxury. This is now Business 101. Does demand abate somewhat  as does the public health crisis? Maybe. Perhaps there will be a natural plateau, or at least more gradual growth, but there is no going back here. Surviving existing businesses will continue to upgrade, and this will be how new businesses are built going froward. No new business is going to leave themselves vulnerable from the get-go.

The firm does acknowledge existing uncertainty around either the length or depth of this pandemic. It is for that reason that I (optimistically) see the guidance, which could have been simply not offered (everyone gets a free pass this quarter), that might be a little on the conservative side. All that aside, the firm sees fiscal Q2 revenue at $3.65 billion, give or take 2%. Wall Street is down around $3.25 billion on this line. The firm also sees adjusted gross margin at 66%, above consensus of 64.8%, and also better than the 65.8% reported for Q1.

Investors need to bear in mind that the firm did suspend the share repurchase program ahead of the Mellanox purchase. I would not expect to see this program renewed even with remaining authorization in the current environment. The firm still does pay shareholders a very small dividend ($0.64 per annum) yielding 0.18%, and has at least expressed the intent to making these payments in quarterly increments.

What "They" Are Saying

Just this (Friday) morning alone, I have noticed 15 sell-side analysts chime in on Nvidia. All are highly rated, of the 15, 11 are rated at five stars by TipRanks. Of the 15, 12 have either initiated or reiterated their firm's version of a "buy" rating. There are two holds, and there is one "sell". The sell, by the way, is indeed one of the five stars. After adjusting, the average price target for the 15 is $384.73. The high among them would be $430, while the sell rating has a $260 price target, which happens to be $55 lower than the second lowest across the entire group. The median price target is $400. 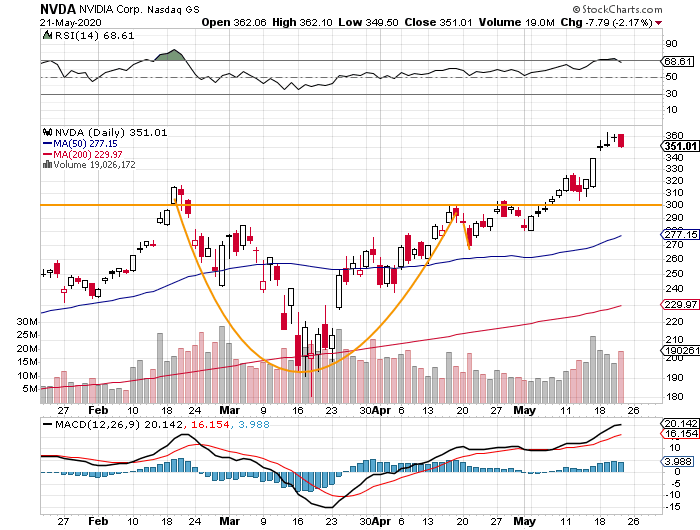 Those who also read my Market Recon column at Real Money will recognize this chart from Monday. We still have a breakout in place from the cup with handle pattern that created the $300 pivot point. I told you then that $360 was conservative, and the shares have now stalled precisely there every day since. My thought? We see $360 again on Friday, I probably shave my long by a rough 30%.

The shares were acting better in early trade than they were last night. Traders looking to improve net basis, and holding at least 100 shares of the equity, could probably sell a $380 call expiring next month for a cool $11 or so. Otherwise, I think those simply looking to add to an equity stake should probably wait until either the shares move toward the 50 day SMA or the 50 day SMA moves toward the share price. My expectation is that at some point today, there will be some profit taking after the run that we have seen.

Get an email alert each time I write an article for Real Money. Click the "+Follow" next to my byline to this article.
TAGS: Dividends | Earnings | Investing | Options | Stocks | Technical Analysis | Trading | Semiconductors & Semiconductor Equipment | Technology