Why do my ears perk up every time I think about a possible merger deal between CBS (CBS) and Viacom (VIA)   (VIAB) ? {note for retail investors.. the "B" shares trade at much higher volumes and are therefore much more liquid.} Well, yes, as an investor I have been focused on the cultural shifts going across the realm of media and entertainment for quite some time, but also this.. a lot of the shows I like are simply CBS property, namely the Star Trek franchise, and the current renditions can only be found at the CBS "All Access" over the top subscription streaming service.

The rumors actually started years ago. The two firms actually discussed the possibility in earnest more than a year ago as former CBS CEO Les Moonves resigned amid allegations of inappropriate conduct. This on again, off again contact between these two entertainment giants seems to crop up every couple of years since the two firms split from each other back in 2006. The financial media has been all over the story in recent days. On Friday, Charlie Gasparino reported at Fox Business that things were once again heating up, and that a deal could be reached by Sunday night.

By Sunday night, there was still no deal announced as Bloomberg reported that a deal could conclude as early as Monday morning, though terms were still uncertain. It had been believed in the discussions held more than a year back that the deal would require Viacom to take 0.6135 CBS share for every nonvoting share of their business, and that in addition between the two operations over $1 billion in savings could be achieved through synergies. Key differences this time around would be that Viacom has been working extensively to recuse expenses and those synergies are now only estimated to produce roughly $500 million in yearly cost synergies.

Mid-morning Monday. Still no deal? The Wall Street Journal reports that the two sides are in the final stages of negotiation that would land the ratio of exchange in a range between 0.59 share and 0.60 share of CBS per. This would be an all-stock deal ultimately placing under one roof.. the CBS broadcast network, the Paramount film and television studios, and Viacom's cable television operation that includes such well known networks at MTV, Nickelodeon, BET, and Comedy Central.

Current CBS interim Chair Strauss Zelnick is not interested in carrying on in an executive role according to Bloomberg. This likely paces Shari Redstone of National Amusements (controlling interest in both companies) in the Chair. Viacom Chief Executive Bob Bakish is expected to continue in that position for the combined companies. The board will be comprised of 13 seats, with CBS filling six, Viacom filing four, and at least two going to national Amusements. Both firms recently exceeded earnings expectations for the most recent quarter, with CBS in my opinion doing so more impressively thanks to increased domestic licensing revenue, increased advertising revenue and subscription revenue. Hmm, there goes Star Trek again.

Perhaps in anticipation of an announcement, perhaps in disappointment that nothing has yet been announced, both VIA and VIAB were trading between 3.5% and 4.2% lower on Monday, while shares of CBS were now trading close to 1% lower after having traded considerably higher in the early going.

How to play the deal? Should there even be a deal? Only at a discount, so if there is disappointment there is some wiggle room for maneuver. My preferred vehicle for entry without an existing position would be the survivor firm, and the more liquid choice at that.. VIAB. 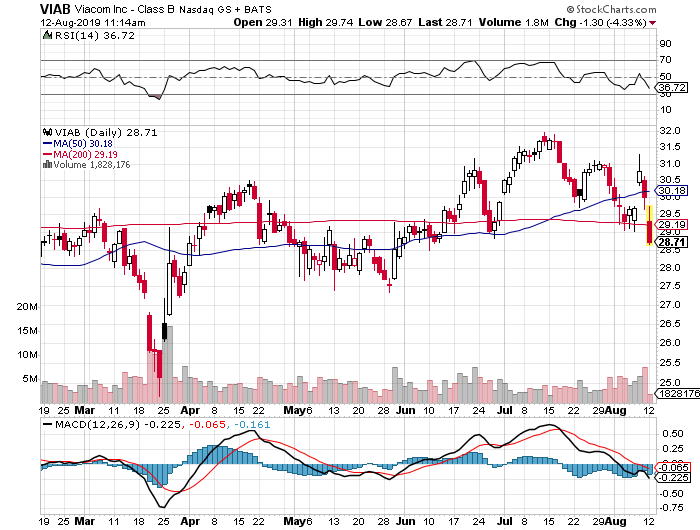 The shares could see some support around $28.50. That spot breaks and another dollar could be shaved. I don't like the equity here above $27.50. That said, $28 calls expiring this Friday are going for roughly $0.55. That to me would be far more attractive than an equity stake. 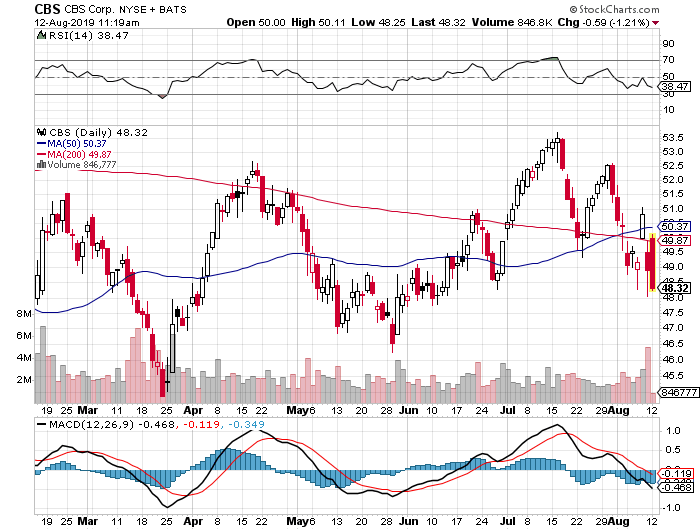 That said, should the deal go down pricing CBS at anything representative of a premium, $49 calls expiring this Friday are valued down around $0.45. At least this takes the risk out of the game.

(Viacom is a holding in Jim Cramer's Action Alerts PLUS member club. Want to be alerted before Jim Cramer buys or sells VIAB? Learn more now.)

Get an email alert each time I write an article for Real Money. Click the "+Follow" next to my byline to this article.
TAGS: Mergers and Acquisitions | Investing | Options | Stocks | Technical Analysis | Trading | Media | Stock of the Day