There is an old market warning about the dangers of trying to catch a falling knife. This refers to the situation where a stock is making a very quick and sizable drop and appears to be a good value. The logic of the warning is that it just isn't possible to know how far a stock might drop before it eventually finds support and it is easy to bury yourself when your timing is off. There are few things in trading more painful than thinking you have made a great buy of a great stock just to watch it plunge even further.

Trying to catch a falling knife isn't always a mistake. Good stocks often do suffer big and unexpected drops. The problem is the timing. Traders tend to jump into these situations too big and too quickly and then they end up panic selling when the stock doesn't bounce as they hoped. The problem is that emotions take hold if your timing is off and that is when you are most prone to make mistakes.

The key to trying to catch a falling knife is to be prepared to be wrong. Instead of compounding your mistake by buying more, it is important to reduce your exposure and regain your emotional balance. First, you have to have high confidence in your thesis for buying because if you are wrong in that regard it won't matter how good your timing might be. However even if you are right and highly confident, poor timing can still kill you.

The key issue to recognize is that the bigger the position you are holding then the more prone you are to make emotional mistakes. The classic situation is when you are convinced that the market reaction is wrong so you continue to buy more and more. When the bounce does not materialize, you sell out of panic and disgust. Quite often this turns out to be the low point.

If you can keep your position size small enough to avoid a strong emotional response not only due you avoid the costly emotional panic selling, but you are in a position to make aggressive buys at a much better point. The risk is reduced and you can be more aggressive.

This past week I had two situations like this. One was in a SPAC that had just completed its merger, Velodyne Lidar (VLDR) , and the other was in a biotechnology stock which had study news that was misunderstood, Myovant Sciences (MYOV) .

I believed that the response to MYOV was without any merit and wanted to rebuild a position in the stock. I bought several times and then a series of partial stop losses triggered. I still have a position and some realized losses but my position was not that large. With the stock now finding some support, I am in a position to rebuild for recovery down the road. It may take some patience but the risk seems quite low now compared to the potential return.

This is not an approach without risk, but it can pay off extremely well when the market overreacts. 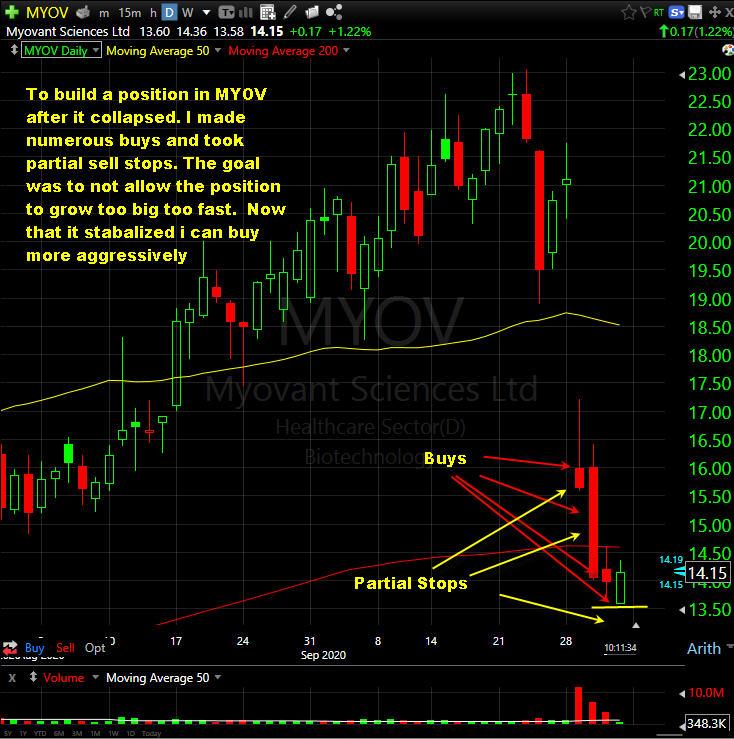