They say that everyone who has any exposure at all to the stock market, even if only in a retirement fund that they have no control over, has some exposure to Apple (AAPL) . Apple, at a market cap of $2.46 trillion, even after last week's selloff, is that big, and that important. When Apple zigs or zags, that probably means that nearly everyone should pay attention. Of course, Apple is in the news. Last week came the ruling in the high-profile case between Apple and Epic Games where all sides involved, even those developing apps for app stores not directly involved, claimed victory. Then there is this week's Apple launch event set for 13:00 ET Tuesday afternoon, which may act as a potential catalyst for the stock. Or not. Apple reports the firm's fiscal fourth quarter results in about six weeks (around October 29th) for those keeping score.

Last week, shortened by a day due to holiday, the S&P 500 gave up 1.7%, while Apple surrendered 3.5%. The week culminated with a split decision in a federal court that was at first reported as a defeat for Apple, but in retrospect that first take appears to have been something of an exaggeration. Readers will recall that Epic Games, the maker of Fortnight, sued Apple after Apple removed that game from its app store. Apple accuses Epic of steering game players (users) around the app store to make purchases, thus finding a way to circumvent the 30% commission that Apple charges developers that operate through the store.

The judge found that Apple had acted in an anticompetitive way, but that what Apple did not quite constitute a monopoly. Experts largely agreed that the decision did not necessarily open Apple up to future antitrust litigation. While Apple must allow developers to provide a path toward going around the app store, it remains in all likelihood the avenue most conveniently available to users who might not want to go out of their way to re-enter information elsewhere already stored on Apple's app store. Just to put an exclamation point on the ruling, it was Epic Games that filed an appeal of the decision this weekend, not Apple.

High profile and highly rated (5 stars at Tip Ranks) Dan Ives of Wedbush, described to Barron's in response to the ruling a "worst case scenario" that would result in a 3% to 4% hit to revenues, but also describes the risk as a "rounding error."

Apple will hold the firm's Autumn launch event on Tuesday afternoon, September 14th. This year much of the buzz is around a potential iPhone 13 that is expected to come with an improved camera and perhaps a smaller notch, but is expected to look like the iPhone 12 which has been selling well. There is also some buzz around a possible Apple Watch 7, which will likely be resized ever so slightly from Apple Watch 6. There is also some idea that there could be some healthcare upgrades included in Apple Watch 7, such as a way to take blood pressure on the go. There is no confirmation of anything like this however.

There has also been mentions made that there could be new product roll-outs of entry level AirPods and as well as some kind of Virtual Reality glasses that would be meant to compete directly against the just revealed Facebook (FB) smart glasses. An expanded line-up for the Apple TV+ streaming entertainment competitor is also a possible mention on Tuesday.

Dan Ives was not the only professional inclined to express an opinion of late. In fact, since Friday, I have found nine either four or five star rated analysts that said something about Apple after the Epic ruling and ahead of the launch event, including Morgan Stanley's Katy Huberty who is just as focused upon Apple as is Ives. Across the nine, eight reiterated or maintained their "buy" ratings or their firm's equivalent. Matthew Cabral of Credit Suisse maintained his "hold" rating. Cabral has a $150 price target. The average target price of the eight "buy" ratings is $177.25, with a high of $185 (Ives) and a low of $168 (Huberty).

I can find 28 analysts in all that cover AAPL. For the current quarter, which will be reported in roughly six week, consensus view for EPS is running at a rough $1.22, with the range of expectations spanning from $1.05 to $1.34. Revenue is expected to print at around $84.5 billion, 31% year over year, and centered within a range spanning $77 billion to $91 billion. Lastly, I do think that the 2% excise tax on corporate share repurchases would impact Apple' share price negatively. That said, I think the idea is poorly thought out, and a long way from becoming part of corporate tax law. 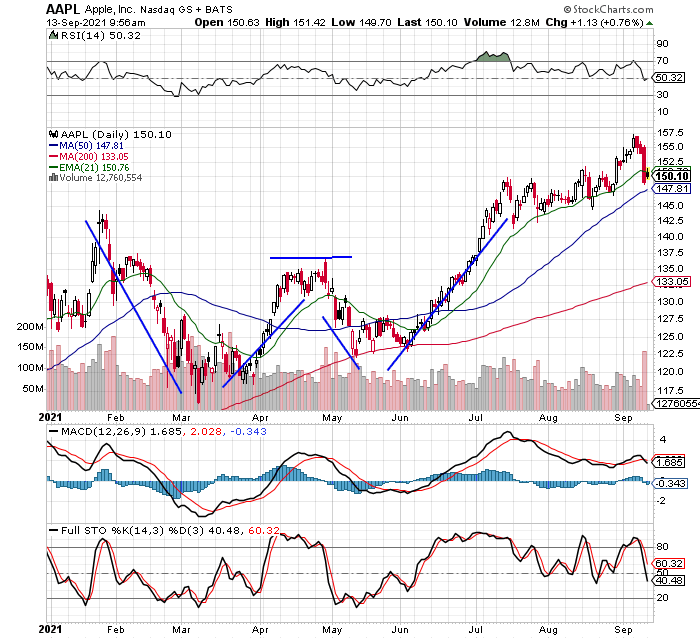 Readers will note that the breakout from the $137 pivot coming out of this spring's double bottom stalled and moved sideways throughout the summer. Currently, the shares are in an "epic" battle to hold onto the 21 day EMA which has been pierced on consecutive days. Relative Strength and the Full Stochastics Oscillator have sort of looked at each other and shrugged their shoulders here. The daily MACD is not sending any particular signal, though I would like to see the nine day EMA breakout of negative territory.

Bottom line, Market Recon readers know I am long AAPL and have not made any recent sales. Last Wednesday, I reiterated my $169 price target, which puts me in excellent company (Huberty at $168) at the low end of the range of highly rated professional analysts. That said, I do not add until I am certain that there will be no attempt made on the 50 day SMA. "Own it, don't trade it" seems like pretty good advice right about now.

(Apple and Facebook are holdings in Jim Cramer's Action Alerts PLUS member club. Want to be alerted before Jim Cramer buys or sells these stocks? Learn more now.)

Get an email alert each time I write an article for Real Money. Click the "+Follow" next to my byline to this article.
TAGS: Earnings | Investing | Markets | Stocks | Technical Analysis | Trading | Software & Services | Technology | Analyst Actions