While global financial markets melted into a dangerous condition on Monday morning, Tyson Foods (TSN)  seemingly under the radar released the firm's fiscal third quarter. Tyson reported non-GAAP EPS of $1.47, which met expectations. Revenue of $10.89 billion might have fallen short of industry consensus, but still grew 8.4% year over year. The shares reacted quite well to the release, despite a very rough tape. Perhaps it was the GAAP EPS of $1.84, that seriously beat expectations. Perhaps it was more than that.

When I think Tyson, I think chicken. Obviously, the firm is far broader than that, but that's what comes to mind. The firm's chicken business experienced a 23% rise in volume that supported an 11.8% increase for the broader firm. That said, average prices declined for the firm in general by 3.5%, weighed down by an 11.4% drop in average chicken prices. This forced operating margin down to 7.3%, which was expected. However, this was down from 8.1% for the same period one year ago. It should be noted that the firm's prepared foods segment outperform beef, chicken and pork in terms of operating margin.

Tyson CEO Noel White addressed the impact of this outbreak. White said "The African Swine Fever outbreak continues to take its toll on hog supplies in Asia; however, we have not yet experienced significant benefits to our Pork, Chicken, or Beef segments. Given the magnitude of the losses in China's hog and pork supplies, the impending impact on global protein supply and demand fundamentals is likely to be a multiyear event."

Knowing that Chinese consumers rely on pork to a far greater degree than do American consumers, or really any other nation for that matter, does this make Tyson, or other large American food suppliers key to any possibly resolution to the trade dispute between the world's two largest economies? Not if Chinese state companies are not going to be permitted to purchase livestock, which is part of agriculture. There is going to be a need though, and supply will come from somewhere. This will likely include beef and chicken as well.

Looking back, the firm has repurchased 3.4 million shares over the first nine months of the year, so that's not a significant reason to get involved. The 1.88% dividend yield is something, but again, not a compelling reason to get long if not already there. Forward guidance has been reaffirmed for full year EPS at a range spanning from $5.75 to $6.10. 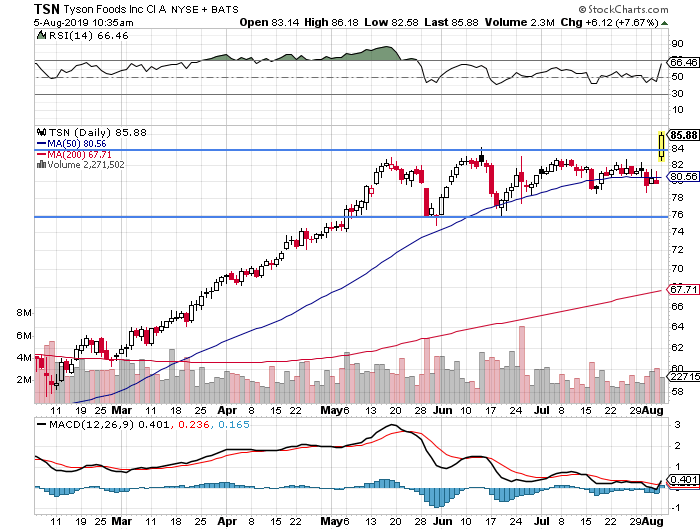 I have outlined in blue for you the May through this past Friday range that these shares had been confined to. The break above the top of that range this morning would be key in a normal market. This is not a normal market, and as impressive as this is (This is impressive.), I would feel uncomfortable allocating new capital amid such uncertainty in a name that I am not already involved in engaged in a spike.

If one were inclined to get after this name with an intention to end up long the shares, given that capital return to shareholders is not really a driver here, I would look for a risk averse way to do so, such as getting long a bull call spread or something of the like. An idea might be (in minimal lots) the purchase of January 17th $85 calls for roughly $6.35, coupled with the sale of January 17th $95 calls for around $2.35 in order to reduce the outlay. This way the entire risk is reduced to $4.

Get an email alert each time I write an article for Real Money. Click the "+Follow" next to my byline to this article.
TAGS: Investing | Options | Stocks | Technical Analysis | Trading | Food & Staples Retail | Stock of the Day