My suggestion is that if you came in today looking for performance, that maybe you try the opera. Just in case that is not quite your speed, I am told that the Swedish power metal band Sabaton is in town later this week. AT&T (T) reported the firm's third quarter financial performance early on Monday morning, and the shares are on the rise in the early going. One thing is certain, the shares have traded higher, not based on performance. Well, not this quarter's performance anyway.

For the quarter, AT&T reported adjusted EPS of $0.94, meeting my expectations, but beating much of the street by two cents. GAAP earnings missed quite badly. Revenue printed at $44.58 billion. Not only was that a miss, that number showed year over year contraction of 2.5%. By the way, yes I am long the shares. The firm acknowledges a net loss of 1.163 million premium TV subscribers though a net add of 255K telephone communications subscribers, 101K of whom are paying monthly.

The shares are trading higher largely because of the firm's announced three year plan going forward. First, the firm expects Chairman and CEO Randall Stephenson to stay at his post through at least 2020, but will separate the two positions upon his departure. The firm increases full year 2020 revenue guidance to $184 billion to $186 billion, above industry consensus of about $182.5 billion, while taking FY 2020 EPS projections to $3.60 to $3.70 versus Wall Street's $3.58.

On that note, AT&T expects to see adjusted EPS rise to a range of $4.50 to $4.80 by 2022. This will include investment made launching (in 2020) the streaming service HBO Max. Adjusted EBITDA margin is now targeted at 35% by 2022, reversing the recent trend. By 2022, the firm also expects to see free cash flow increase to $30 billion to $32 billion. The firm also states the intention to modestly increase annually from the already attractive $2.04 (currently yielding 5.5%).

Going forward, the firm also expects to monetize between $5 billion to $10 billion worth of non-strategic assets, while retiring 70% of the shares issued for the Time Warner acquisition. As debt has been and is an issue for this firm, they will also look to retire 100% of the debt created for that deal over the next three years.

Just so happens that the firm will host it's Warner Media Day on Tuesday evening (tomorrow). This is where I think we hear updated news on the new HBO Max streaming service that will compete directly against the likes of industry leader Netflix (NFLX) , as well as other newcomers Apple (AAPL) TV Plus, and Disney (DIS) Plus. At this time, that new service is not expected to debut until some time this spring. At this time, we have seen no news indicating that satellite TV provider DirecTV might be part of any divestiture of current in house assets. Oh, one more thing. If there is to be a share repurchase plan launched in order to help with the retirement of the shares mentioned above, tomorrow would be the day to announce it.

As I have expressed in the past, and I am sure that I probably wrote specifically about this name several weeks ago, I love when activist investors, in this case Elliott Management, get involved in a name that I am already long. The firm seems clearly involved in what Elliott is trying to accomplish and certainly seems on board with boosting that 10 times multiple where forward looking earnings are concerned. Direct telecom competitor Verizon (VZ) , a firm that just teamed up with Disney's streaming service, currently trades at 12 times.

I showed you this chart back around the time that Elliott Management had made their stake known, and first placed some pressure on current management. Below is what I now see. 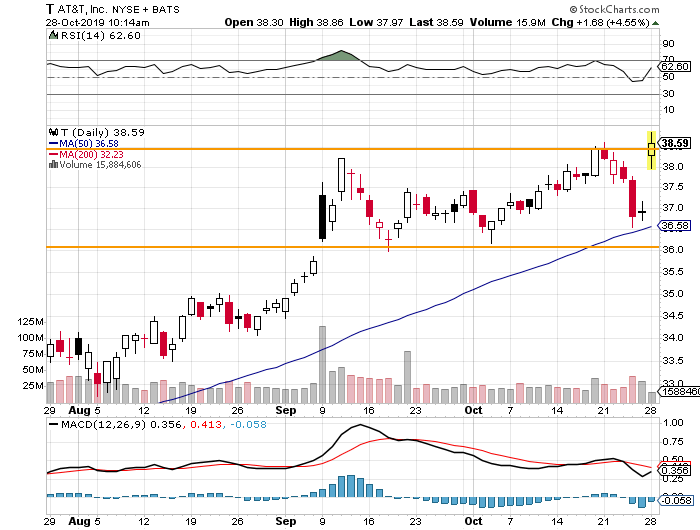 Now, we see rising Relative Strength coupled with a daily MACD that looks to potentially crossover bullishly as the shares break out of a two month basing pattern. If the shares can take and hold the $39 level through Wednesday's opening bell (in the wake of the investor day), my thoughts would be to take my target price to $46, and my panic point to $35.

Get an email alert each time I write an article for Real Money. Click the "+Follow" next to my byline to this article.
TAGS: Activist investing | Earnings | Investing | Stocks | Technical Analysis | Trading | Telecommunications | Telecom Services | Stock of the Day