Ever been waiting at a secondary subway platform as an express train barrels through on the local track? The deafening roar. Reminds one of this stock market. You are either on, or off. This train seems to only keep moving. On Friday night, the S&P 500 closed at 3221 after having traded as low as 3070 on December 3rd. That's less than three weeks ago. That's a 4.9% move off of that early month low. A sizable portion of this move has come only in the past week, the S&P 500 increasing by 1.6%, the Nasdaq Composite a whopping 2.1%. In one week. Despite the fact that both of these major indices opened higher last Monday, then moved sideways to slightly higher for nearly four days, then once again moved robustly to the upside on Friday.

Of course the trading volumes were mammoth on Friday, a "quadruple witching" expiration. That however, does not explain that for both of these broad averages, the fact that trading volume has landed above it's own 50 day SMA for seven consecutive days. Remember, we have been writing and speaking about a chase for performance ahead of a "Santa Claus" rally? We were certainly right about that. What we (read that as I) were not so correct about was my expectation that there would be a bout of profit taking going into our annual meeting with the jolly fellow, that comes hand in hand with the "January effect" which would probably be more accurately described as the "early January effect."

Of course, there still could be this bout of profit taking. Amid the famous Fed induced late 2018 market meltdown, equity prices did not bottom until December 24th. Those with really good memories will recall that the S&P 500 closed at the low of the day/week/month/quarter/year on that half day session. Or at least they would have had not the market wiggled a bit early in the December 26th session prior to deciding to rally significantly from there.

There is no doubt that price is indeed fact. Whether or not price is truth or not depends on a much higher standard for qualification. One "problem" though, that is clearly not the right word for investors, has been the avalanche of stocks hitting target prices. Though far more preferable than finding oneself deep in the hole, this has created for many of us larger cash positions than intended, as well as a lack of losers to take against winners for tax purposes. This has I believe actually had a withering impact on the supply side of the price discovery equation.

Sure, equity prices have run, as the veil of uncertainty has been lifted to varying degrees concerning trade with China, the Federal budget, impeachment proceedings, Monetary policy, and Brexit. This has allowed traders to draw funds out of the long end of the curve, which is absolutely key, with the Federal Reserve nailing the short end of the same curve in place. This morning, the U.S. 10 year note yields more than 1.9%, and has given up more than 1.94% at several points last week.

These expanded spreads within the yield curve signal two possibilities to the marketplace. For one there is a perception that the environment is now more conducive to economic growth. The other is now that the backdrop allows for more consumer level inflation that quite frankly I doubt any consumer will be comfortable with, or any young consumer has ever experienced. I know you have seen prices for WTI crude futures trade above $60 per barrel. That's directly resultant in headline level inflation, Sport.

I also know that you saw the numbers for November Personal Spending released on Friday by the Bureau of Economic Analysis that directly clashed with the data for November Retail Sales provided by the Census Bureau. Forget that Cyber Monday fell in December this year. Whereas this is concerned, that's simply irrelevant. Somebody's data is faulty. Guess we'll know more when the revisions come in. Not to mention the facts that the Census Bureau tells readers up front that the data is seasonally adjusted, and then after that, there is still +/- 0.4% margin for error in the monthly numbers. Remember this for all time... economics is more art than science, and that may be the only thing truly factual that you'll read today.

Is yellow green? No, yellow is yellow. But these numbers are for November. Oh, then yellow is blue. But yellow was green last year. Last year was different, yellow is usually red in November. Red? Are you sure? Listen, just do the math, we've got a deadline. Sure boss.

Ever more interesting becomes what appear to be stretched metrics for equity valuation. Now, do not get me wrong, although I thought that we would see some profit taking by now, I do run a decisively net-long equity book. Having to choose between being right about timing a selloff, and realizing better performance in my P/L, I choose the dollar bills, y'all.

However, nothing surprises in 2019. That said, according to FactSet, the S&P 500 now trades at an even 18 times forward looking earnings, up from 17.8 times just one week back. This is now well above the five year average of 16.7 times for the index, and I won't even go into the 10 year average as that number lives in another area code. You may notice the Health Care sector near the bottom of a year to date standings board, but you will also find Health Care in the top three in the sector standings for one week, one month, quarterly, and six month performance. That sector is now priced at 16.1 times the next 12 months' earnings, above the sector specific five year average of 15.8 times. This leaves Energy as the only sector still trading at a discount to it's own historical averages. Very interestingly, still taking from FactSet, earnings projections are still moving in the opposite direction. Earnings projections in aggregate for the S&P 500 now stand at -1.4% year over year for the fourth quarter. Beyond that, the year 2020 is still expected to be one of positive growth, but Q1 has been ratcheted down from 5.4% to 5.0%, and Q2 has been knocked down to 6.6% from 6.9%... all in a week's time. With revenues growth expected to remain positive throughout, how far can equities go, with such pressure on profitability. Ahh, a more relaxed condition for trade with China. Perhaps, you're right. I mean, what could possibly go wrong?

On Monday morning, which was Sunday night in New York, news broke out of Beijing. Big news. Xinhua (state run news agency) reported that in a plan approved by the State Council, the Chinese government will reduce tariffs of 850 types of imported products to rates below that of "most favored nation" status. These products will include frozen pork. medicines, and semiconductors beginning in 2020. In addition, China will implement negotiated tariffs with 23 different nations and regions.

If that seems quite positive, it is and it gets better. About an hour later, the Chinese government also promised to open wider markets for oil, telecom, and power to private competition, and at least in words will provide private companies an environment for equal treatment with state-owned businesses. While this reads as significant, this news at least at this point remains very thin on detail regarding what restrictions might remain, or what kind of timeline any implementation of policy change might entail.

Doing my weekly Sunday night cram/homework session, I noticed one of my favorite names attempting to take another shot at a technical breakout. You may recall, that I covered Splunk (SPLK) in some detail back on November 22nd. The shares were trading around $126 at the time and were coming off of Q3 earnings where they really knocked the cover off of the ball. At time, I reiterated my price target of $143, and initiated a panic point of $119. Well, the stock has moved on, but has remained a core name among my software holdings. I think it now time for a new look at the charts. Splunk, by the way, does not report again until late February. 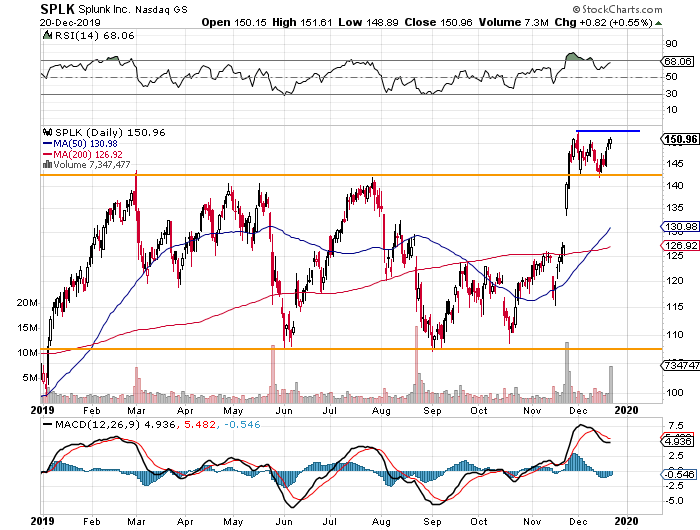 I left the almost year long period of wide consolidation that I showed you back in November on this chart for context. Now, the shares have moved into a new basing that makes use of old resistance as support. This newer pattern is only about a month old, and now stands only about a buck away from testing what would be the new pivot at $152.

Should we see such a move my opinion is that great potential upside could be unlocked. 64 times forward looking earnings? I know. The name does not pass the "Rule of 40" either with 30% sales growth that must contend with negative margin. Then again, price is fact, even if it is not necessarily truth. Value is the intersection of demand versus supply within the context of time. Micron's (MU) Sanjay Mehrotra told you last week that he expects business investment in the cloud to rebound. Me? I'll be convinced when this new pivot is taken and held. In the mean time, as I move my target higher, I also move higher my panic, so even there, I win, and win big. Got me?

Get an email alert each time I write an article for Real Money. Click the "+Follow" next to my byline to this article.
TAGS: Investing | Markets | Options | Stocks | Technical Analysis | Trading | Software & Services | China

We See Room for Returns From This Dividend REIT

Office Properties Income Trust is a turnaround stock yielding over 8%

My belief is that within this deep value pond, an active approach can outperform passive.