I am sure that many readers have been watching alternative investments such as gold and silver or cryptocurrencies, especially since the calendar turned. Both gold and silver surged on Wednesday, reaching their highest levels since November's sharp selloff.

There is no denying that 2021 was a tough year for precious metals. Gold actually contracted in price for the year... in an easy money year. Now, with consumer inflation spiking to a 7% annual rate, and wages rising just 4.7% annually, investors are waking up to one of the yellow metal's perceived functions, that of being an inflation hedge... or maybe this sudden demand is the result of geopolitical concerns as Russian troops knock on Ukraine's door, North Korea fires ballistic missile after ballistic missile into the Sea of Japan, and Mainland China's air and sea forces make regular sport of "buzzing" Taiwanese space.

Gold has really traded sideways to slightly lower since peaking in August of 2020 as higher quality cryptocurrencies, Bitcoin in particular, have soared. There is no doubt in my mind that Bitcoin or Ethereum have taken share away from Gold or Silver where alternative (ex-fiat money supply) investment is concerned. While folks of a certain age (mine) rely on precious metals as a way to circumvent the system, that is precisely how those younger than I look at cryptos.

Just an aside, it appears that Bitcoin has continued to rally this morning despite revelations that trading platform Crypto (Dotcom) a rough $34M in various cryptocurrencies in a hacking attack earlier this week, and a Thursday morning report by the Bank of Russia calling on that nation to ban cryptocurrencies.

I don't hold any direct position in any cryptocurrencies. I am not a naysayer, though I do know where my physical gold and silver are when the lights go out. I have long (not that long) held that Bitcoin was probably not for me, but that Ethereum might be as I think Ether would serve better the functions of money than Bitcoin. It's easy to say that cryptocurrencies will never be taken seriously as an asset class until beyond being divisible and serving as a store of value, they could also serve as a medium of transaction, and must have, for lack of a better term... an elastic money supply.

However, once one makes that argument, itr becomes more difficult to defend precious metals in this modern global economy. Sure, both gold and silver have been "money", but neither currently serves as a medium of transaction on a regular basis, or for lower to middle class people. I had said, publicly.... that I would enter Ether Ethereum at $3,500. That crypto trades this morning around $3,175, and has traded just above $3K. I am yet to pull that trigger.

Bullion prices have found some support, and in my opinion, have some catching up to do. While a rising interest rate environment should draw value from all asset classes, gold and silver until recently had lagged, and both serve the inflation protection narrative. Readers will see that physical gold futures contracts have formed a convergence between a downward sloping upper trend line and an upward sloping lower trend line. 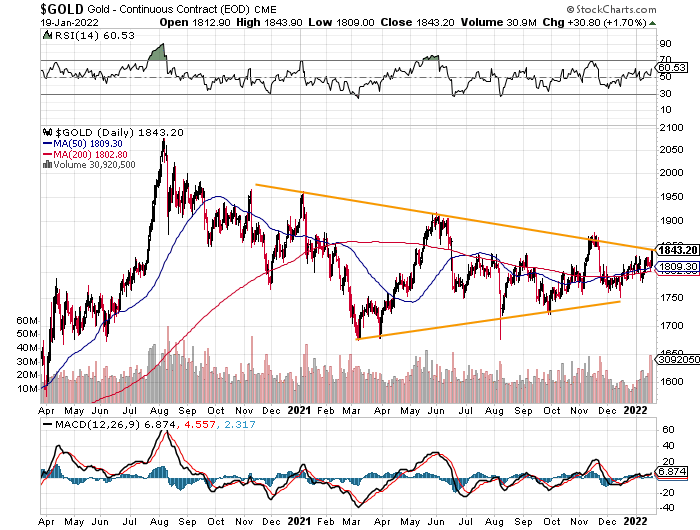 These kinds of convergences tend to end with an explosive move one way or the other. 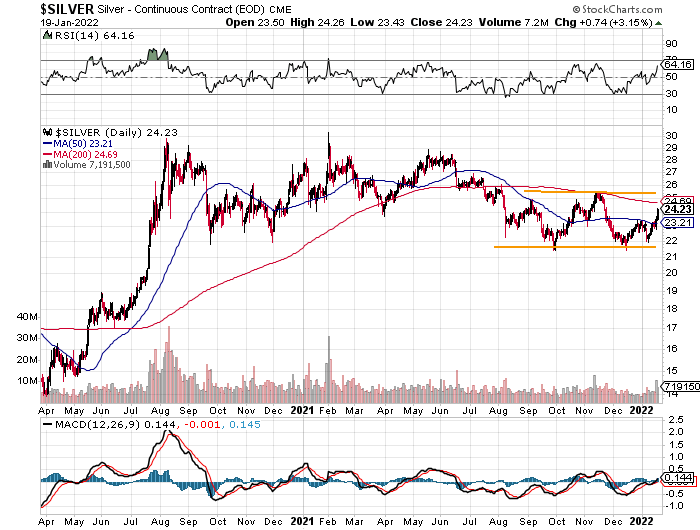 Physical silver has been steadier, especially since selling off last spring. The chart for the (continuous contract) furries has formed a base, and retaken the 50 day SMA, but still has traffic ahead at the 200 day SMA and at the top of the base.

Readers will see that the most well known and popular gold-based exchange traded fund is the SPDR Gold Shares ETF (GLD) . 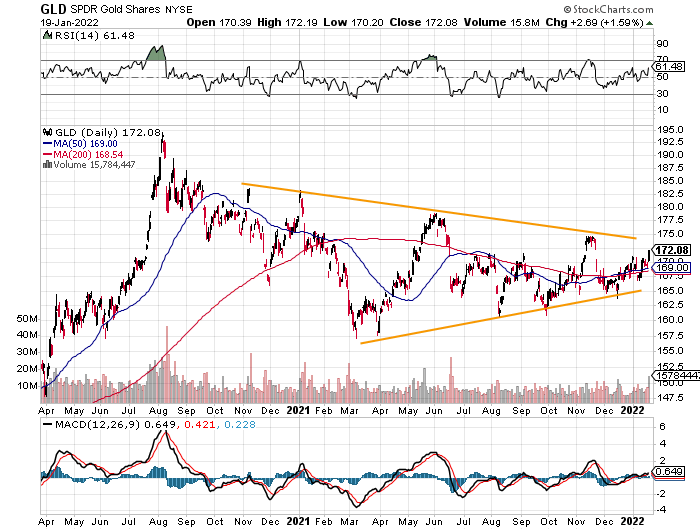 The chart of the ETF runs very closely correlated with the physical and does seem prepared for an explosive move as well. The same might be said for the most popular silver based exchange traded fund, the iShares Silver Trust (SLV) . 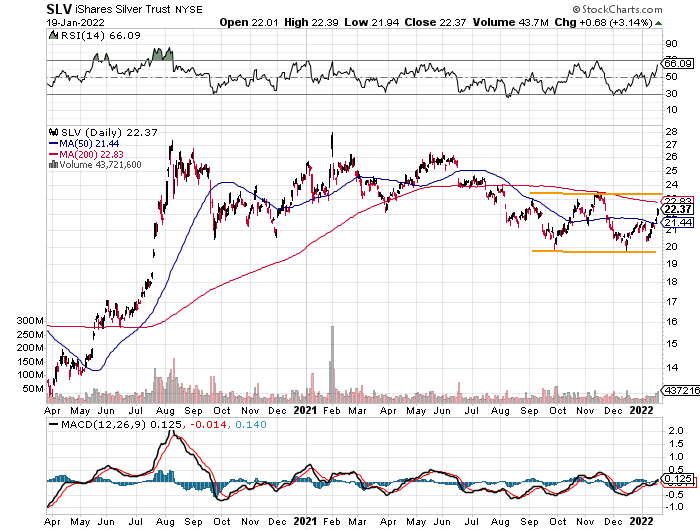 The price ratio for one share of the ETFs as of Wednesday's close was 76.9 to 1, very close to the ratio for the physical commodities.

I cannot tell you what to do. I can tell you what I do. I have long held that anywhere from 5% to 10% of my investible funds should be held in alternative, non real-state based assets. Again, just my opinion... the first 5% goes into physical gold and silver with a heavy bias on gold, and from there, based on market conditions anywhere from 0% to another 5% of my investible funds should be held in far more easily re-allocated "paper" gold and silver (the ETFs), also with a bias for gold.

If I were to invest in the crypto space, it would come out of this 5% to 10% (right now, I am at 7.5%) of investible funds and share space with my precious metals, not from elsewhere. What I am in the process of doing is shifting my bias from gold dominant to still majority gold, but a significantly more elevated exposure to silver.

Get an email alert each time I write an article for Real Money. Click the "+Follow" next to my byline to this article.
TAGS: Bitcoin | Economy | Gold | Investing | Markets | Technical Analysis | Trading | Metals & Mining | Cryptocurrency

Let's see why the market moved so much when Fed Chair Jerome Powell said so little.

Nio Jumps -- but Can It Keep Speed Going Uphill?

Rather than counting on what could happen in China, let's check the charts and indicators for this electric vehicle name.