Tuesday started out as a selloff. Twenty-four hours is a long time in this business. Heck an hour, or two can be an eternity if the worm (or the tape) turns on a spoken word, or a crack in confidence turns into a fissure. For Tuesday, and for now, there is a quiet confidence in the air that has soothed market indices that appear to remain on a confirmed upward trajectory. The rebound for most domestic equity indices that came off of that ugly looking second bottom (remember that?) ahead of the Halloween weekend, was violent in appearance. That repricing of risk came understandably ahead of an uncertain national election.

Since mid-November, as positive looking news broke almost weekly in regards to both the safety and efficacy of the earliest efforts to authorize at least the messenger RNA based Covid-19 vaccine candidates for emergency use, investor sentiment has both quietly and steadily outweighed (at least at the point of sale) the real-time hardships created for a public impacted both from public health and economic perspectives. So, indeed... on Tuesday, the worm did turn. The tape, on less impressive, but still healthy enough trading volume saw a red door and painted it green.

What changed? For one, our legislators do appear to finally be more serious about patching (which is what it is) the federal budget at least temporarily while making some progress on getting some help out to Main Street, USA. Then there was the visual of the first citizens being immunized with one of what will be two doses of the Pfizer (PFE) /BioNTech (BNTX) vaccine in the UK. The U.S. should, if the data is as it appears, similarly authorize that same vaccine for emergency use this week. The advisory panel meets tomorrow (Thursday) for Pfizer and then next Thursday to discuss the Moderna (MRNA) effort.

Just how confident are investors/traders? We can cite all kinds of sentiment surveys that show bullishness well above what we consider to be "normal" levels. I prefer to watch certain metrics that track the purchase of protection. If the confidence is not there, it's simple, the pros start buying protection. "They" will be willing to damage their overall net basis in order to hedge net equity risk. First we'll look at the VIX (CBOE Volatility Index), also known as "The Fear Index"...

Readers will note that "fear" is not only in late November/early December at four month lows, but actually at the lowest levels since February if I were to zoom out a bit. Now, we'll take a look at the CBOE Options Total Put/Call Ratio. This includes both single stock and equity index options.

What we'll see here is that the major put/call ratio that we follow might only be at three and a half month lows, but this ratio is dancing the same dance as the VIX. We'll now lay one over the other, but just over the past 30 days...

...and what we find is that over the past one month period, the VIX has given up a rough 17%, while the CBOE put/call ratio stands about 23% below where it was one month ago. In addition, the two have been moving in almost identical fashion since the start of December. There is little to no fear in the air, relative to what we as investors, and we as a people, have been through.

For the most part, on Tuesday, small-caps ran the show. The Russell 2000 (+1.4%), and the S&P 600 (+0.9%) easily led equities, though all of our large cap indices did manage to meander in a northerly direction. Gains for large cap indices were largely kept in between a quarter to a half of one percent for the day. Breadth has been impressive at both of New York's primary exchanges. Most interestingly, though "only" up 0.3% for the day, the (non-financial) Nasdaq 100 has now posted 10 winning sessions in succession.

That's on a lot of recent strength in semiconductors and biotechs. Adding in the banks probably would not have hurt overall performance for the period, as the yield curve has steepened, but you would not have a 10 day streak intact. The Nasdaq Composite has experienced two losing sessions over the same period. However, the Nasdaq Composite has run 5.8% over the past 10 sessions, while the Nasdaq 100 has run a "mere" 4.5%. Okay, I'm a numbers nerd. If you made it this far, you probably are too.

The DoorDash IPO was priced last (Tuesday) night. Thirty-three million shares at $102 a pop. Readers will recall that the original price range for the deal was $75 to $85. DoorDash went through a tough looking third quarter that came after a profitable Q2, at least according to GAAP principles. Adjusted EBITDA has continued to grow. The big winner here will be Softbank (SFTBF) , a 22% stakeholder. The shares will trade at the New York Stock Exchange under the symbol (DASH) . Goldman Sachs (GS) and JP Morgan (JPM) are running the book. Buy some DASH today?

Well, I am flush with cash after that poorly timed sale in Tesla (TSLA) on Tuesday morning. (No, I have not yet chased myself back into that name. I am still trying to hang tough sown around $615, but I probably bite early in the $630's. We'll see.) As for DASH, I have to see how it trades, and more importantly how the underwriters are trading it after it opens. Given that Goldman is involved, and that bank is notoriously slow and careful when engaged in this kind of activity... I would be surprised to see this one open anytime close to the opening bell. I think we have hours to think this one over.

Not only were the first British citizens "jabbed" with the Pfizer vaccine on Tuesday, and not only does that already mentioned advisory committee meet tomorrow in the U.S., but there was new Pfizer news released on Tuesday that helped push the shares higher. Detailed information was released on Tuesday that showed the PFE/BNTX vaccine to be both safe and effective to this point, and across all age and ethnic demographics at that. Efficacy rates are as high as 93% for those aged 65 or older. In addition, though this vaccine requires two "jabs" 21 days apart, it appears that some significant protection is afforded the "patient" even after just the first dose. The one notable negative I see is four cases of Bell's Palsy among the vaccine group, and while this number is not out of line with the population statistically, there were no instances of Bell's Palsy among the placebo group. (Bell's Palsy is considered temporary and treatable.) 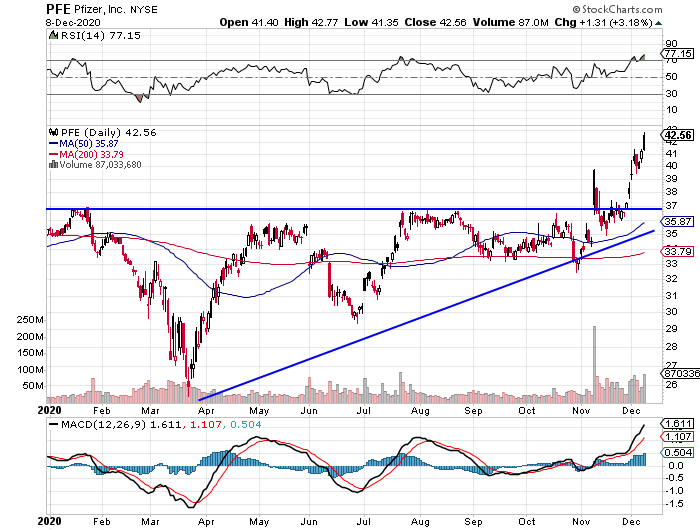 It did take a while, but our ascending triangle is producing a break-out. My target price remains $48, my panic point remains $36. My intent would be to add on weakness in between $39 and $40 depending on why the name might be acting weak. This is for now, and for the foreseeable future... a headline driven stock.

(GS and JPM are holdings in Jim Cramer's Action Alerts PLUS member club. Want to be alerted before Jim Cramer buys or sells these stocks? Learn more now.)

Get an email alert each time I write an article for Real Money. Click the "+Follow" next to my byline to this article.
TAGS: IPOs | Investing | Markets | Stocks | Technical Analysis | Trading | Coronavirus