Earnings are being reported fast and furious this week, and on Tuesday Walt Disney Co. (DIS) is due to report. During Friday night's Mad Money program Jim Cramer said he was looking for great things from DIS which continues to make strides in its streaming businesses.

Let's check out the charts and indicators to see how prices are positioned.

In this daily bar chart of DIS, below, we see an "interesting" pattern, especially if you put your thumb over the price decline in late December from $108 to $100. Why take "editorial license" with the chart? I do not do this very often and I council my students at Baruch College not to do it, but volume did not expand on the decline and doing this exercise of revisionist history makes the pattern easier to interpret.

DIS would have held the rising 200-day moving average line in December and it looks like it held the line so far this year. The daily On-Balance-Volume (OBV) line shows a sideways pattern from September.

The Moving Average Convergence Divergence (MACD) oscillator is right on the zero line and could turn bullish if prices rally.

In this weekly bar chart of DIS, below, we can see that prices are above the rising 40-week moving average line.

The weekly OBV line shows a rise from April and the MACD oscillator has narrowed towards a possible outright buy signal in the next few weeks.

In this Point and Figure chart of DIS, below, we can see that it reached a downside price target and rebounded. A trade at $114.23 will be a positive development. 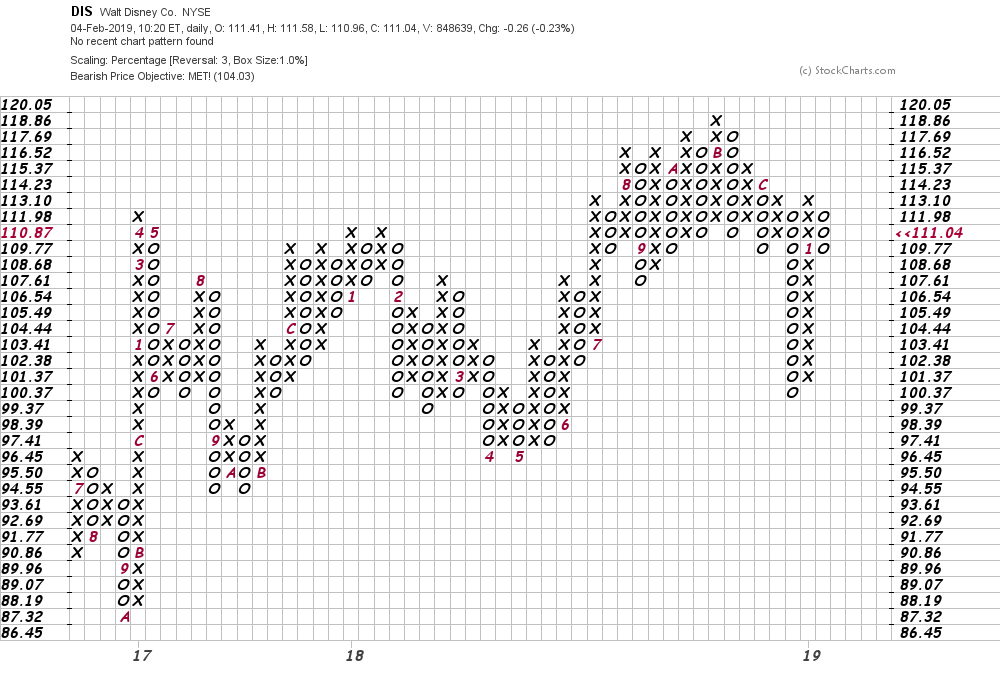 Bottom line strategy: While DIS does not show a lot of aggressive buying in the past month leading up to tomorrow's earnings release, the weekly chart has a bullish bias. I have no special knowledge of Disney's numbers but the chart suggests price strength in the weeks ahead.

Get an email alert each time I write an article for Real Money. Click the "+Follow" next to my byline to this article.
TAGS: Earnings | Investing | Stocks | Technical Analysis | Trading | Media | Movies | Television Production/Distribution | Sports