The question that fills my inbox the most these days is a version of: How can we get a retest when the market has rallied so strongly? Let me begin by reminding you that when I first discussed the potential for a retest I said I did not expect it to come before March. My calendar says that's still one month away.

One reason is because it takes that long to convert the bears to bulls. And thus far the conversion is going rather slowly. For example, the put/call ratio on Friday zoomed up to 113%. Does that sound like folks expecting more upside or more downside? Seems to me the latter rather than the former.

Or take a gander at the Consensus Bulls who took forever to turn bearish and now are only turning bullish grudgingly. They were 38% at the lows and are now 44%. I would have expected 50% by now. 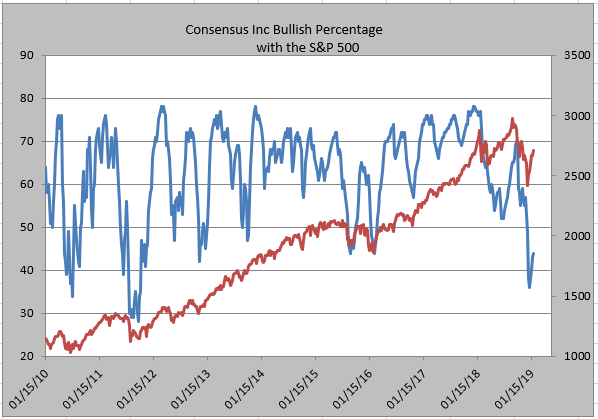 But let's go back to the discussion on "how can we get a retest when we've rallied this much?" Take a look at the entire 2014-2016 period on the S&P. The retest of the October 2014 low arrived in August of 2015. And after a new high! (The retest of all those lows was the final decline in January 2016). That's 10 months later than the initial low.

Or here's another time period: 2001. We plunged post 9/11 for a week, finally exhausting the sellers in a capitulatory fashion. It was V rally because there was no retest. It rallied just over 20%. (as an aside I do not remember anyone calling it a "new bull market"). We then went sideways, in a 10% range for nearly five months (boxed on the chart) before heading down into the July 2002 low.

Every market is a variation on another one. It's rarely an exact script, and quite frankly the market doesn't read textbooks so it will take the path that confuses and leaves out the majority. But if you want to know how we get a retest "after we've rallied this much" here are two examples.

Since I don't expect an imminent retest (famous last words!) let's see where we stand now. The 30-day moving average of the advance/decline line will reach a maximum overbought reading late this week. It will make a higher high, which means that high will have to ultimately be retested. But that's the first intermediate term overbought reading since the rally began.

The Volume Indicator which did an excellent job when it got oversold at 41% in late December is now at 56%. Over 55% is overbought but the math behind this indicator says it too has a window open until later this coming week before it peaks. As is often the case, the market tends to react to oversold readings better than overbought readings with this indicator.

Many stocks have spent the last two weeks milling about with ups and downs, some eking out minor higher highs, some not. My guess is the next two weeks see volatility pick up a bit more once we're intermediate term overbought. The VIX is getting oversold and should enjoy a short term rally at some point this week.