To be honest, just a few hours ago, I thought that I would be writing this Real Money piece about Apple (AAPL) . Even got myself flat that name overnight just to make that piece more interesting. Amazingly, I think, though not more important to markets in a broad way, that General Electric (GE) quite possibly makes a more interesting story for readers. That said, fasten your chinstraps, button down your jerseys, and get ready to drop the gloves.

Let's not get crazy. Accelerated adjusted earnings growth to be precise. For the quarter ended December 31st, General Electric reported adjusted EPS of $0.21, beating expectations by three cents, and up 50% from the $0.14 reported for Q4 2018. Revenue for the quarter hit the tape at $26.24 billion. This number did beat consensus view, but also showed a slight decrease from what the firm generated a year ago.

The headline grabber on Wednesday, morning more so than the quarterly update, came from the full year print for Industrial Free Cash Flow, and the firms' guidance for 2020. This is an especially closely watched data-point for this firm as CEO Larry Culp tries to manage what is intended to be a multi-year turn-around story. For 2019, this line ended at $2.3 billion, above the originally very wide, and at one time, very uncertain guidance of $0 to $2 billion. How uncertain? GE put Industrial Free Cash Flow of $3.9 billion to the tape just in the fourth quarter to get the full year number up to $2.3 billion. That uncertain. Keep in perspective that the fourth quarter is traditionally the strongest for GE.

The firm's largest segment remains Aviation, despite the obvious issues around Boeing's (BA) 737-Max aircraft. Aviation printed Q4 sales of $8.936 billion, up 6% from a year ago. Perhaps more importantly, during this quarter, Aviation took in $10.664 billion in order flow, a 22% y/y increase. Segment profit expanded 19%.

As for which segment runs as the second largest, this honor is essentially tied between Healthcare and Power. Both segments reported revenue just a smidge above $5.4 billion. Healthcare saw orders rise 2%, and profit grow 1%. Power... continues to struggle. Profit? Well, there was profit. That's an improvement. However, incoming orders decreased by 30% year over year.

Renewable Energy continues to lose money. Revenue for the unit did grow by small measure (+2%). Orders showed an 11% decline. What is clear is that the margin is in Aviation and Healthcare, and at least Aviation shows both real-time growth and great potential. GE Capital, now much smaller than it was, has at least presented as less of a drag on the firm's performance in a broad sense.

The future for GE gets a little complex, but hey... what did you expect? The firm guides full year fiscal 2020 adjusted EPS to a range of $0.50 to $0.60, which would be below what I see as industry consensus of $0.66. Concerned? Hmm... I can see why Larry Culp would prefer to be conservative in this outlook, so not any more so than I already was. It's once again Industrial Free Cash Flow that is stealing the show. The firm guides this line toward a range spanning from $2 billion to $4 billion for the year, well above the $1.2 billion that Wall Street is looking for. 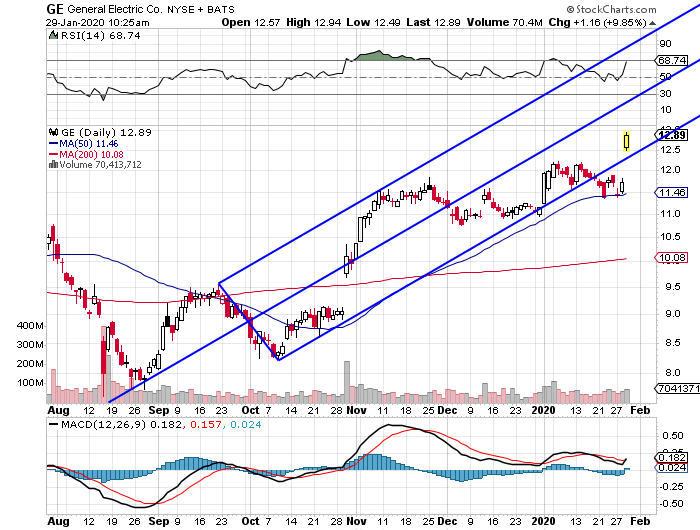 On the daily, the Wednesday pop shows GE regaining our Pitchfork's lower trend line, after severely testing the support provided by the stock's 50 day SMA. Both the daily MACD, as well as Relative Strength suddenly look to be in much better shape. Neither has really shown substantial weakness since at least October. 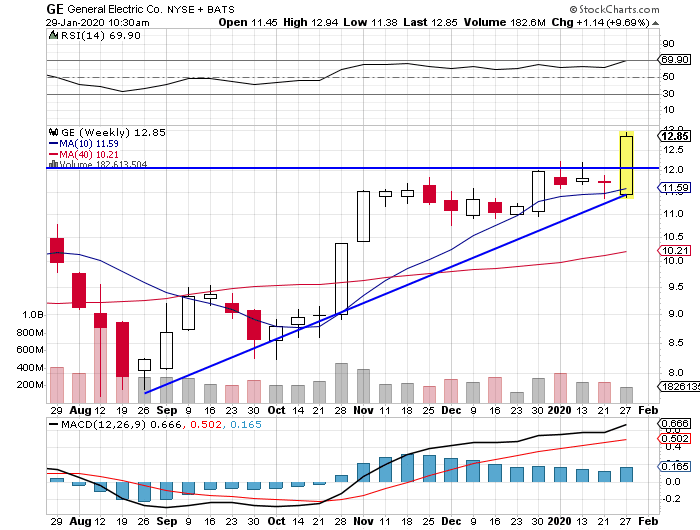 Moving out to a higher altitude, the weekly chart, shows a breakout of an ascending triangle after finding that same support at the 10 week SMA. Should the shares find support at this rough level of $12, the shares can technically make a run at $14. That spot has not been tested since late 2018.

On Wednesday morning, Andrew Obin of Bank of America upgraded GE to a Buy, and increased his price target from $12 to $16. That said, Christopher Glynn of Oppenheimer and Cowen's Gautam Khanna, who is one of the very best in the analyst community, both maintained Hold ratings. In fact, Khanna still has an $8 price target. We have not yet heard from JP Morgan's Steven Tusa today. Tusa did reiterate his Sell rating last week.

I would be slow to act in opposition to both Tusa and Khanna. Just saying. I remain flat this equity. I may grab some $13 puts expiring this Friday, being there is very little risk involved at $0.22 per contract. I am now flat the calls that I had held for quite some time.

Get an email alert each time I write an article for Real Money. Click the "+Follow" next to my byline to this article.
TAGS: Earnings | Investing | Options | Stocks | Technical Analysis | Trading | Stock of the Day