At first I thought how fitting it was that I covered the Materials sector in my Market Recon piece for Tuesday, and had tried to find an alternative way to trade the space given that the group is expected to easily underperform all other sectors for the second quarter as global economic growth has hit likely more than a rough patch. This morning, we spoke of the idea of using specialty chemicals manufacturer Ingevity (NGVT) as a means of working our way around the profit warning dished out by German chemicals firm BASF (BASFY) on Monday.

What I did not know when I penned my early morning piece was that just a few hours later the Industrials as a sector might come under fire. Another group now expected to post negative aggregate earnings for the quarter after a bevy of revisions from a rather robust outlook early on in the spring for the sector.

Analyst Deane Dray at RBC Capital would lower 3M Company (MMM) to Sector Perform from Outperform. Dray also reduced his price target from $207 to $176. That 15% reduction more or less says it all. Dray is a four star rated analyst, and his comments were stern. He referred to an "unsettling string" of guidance cuts. He mentioned the firm's reputation as a "defensive, high-quality industrial is eroding." My take on that? Simply that even with a 3.4% dividend yield that perhaps this name is unfit as a core holding in a value based portfolio. Until a year and a half ago or so, that thought would have entered the back of the mind of no one. In fact, that kind of reminds me of JP Morgan's Stephen Tusa who in response to the firm's dismal showing for the first quarter, reiterated his Underweight rating, while referring to what he sees at MMM as "neither defense, nor growth."

Dray's $176 "below consensus" price target brings the number of analysts either initiating or reiterating opinion on MMM over the last 90 days to 15, with a consensus rating of Hold and an average target price, according to TipRanks of $182.77. Sounds inviting? Not really.

3M gets another at bat om July 25th. Consensus is for EPS of $2.08. That would be a second consecutive quarter of double digit year over year earnings contraction at -19.7%. The industry looks for revenue of $8.05 billion, or -4.1% y/y, a third straight quarter of contracting sales. For the full year, the street now looks for EPS of $9.43. after the firm cut guidance in April to $9.25 to $9.75. Consensus had been for $10.52 prior to that. Sales in local currencies at that time were projected for the year toward a range of -1% to +2%, also a guide down.

The firm will once again be in a position on the call on the 25th to address the impact of the trade war with China, certainly having an impact, and certainly in focus again in the wake of the BASF warning. 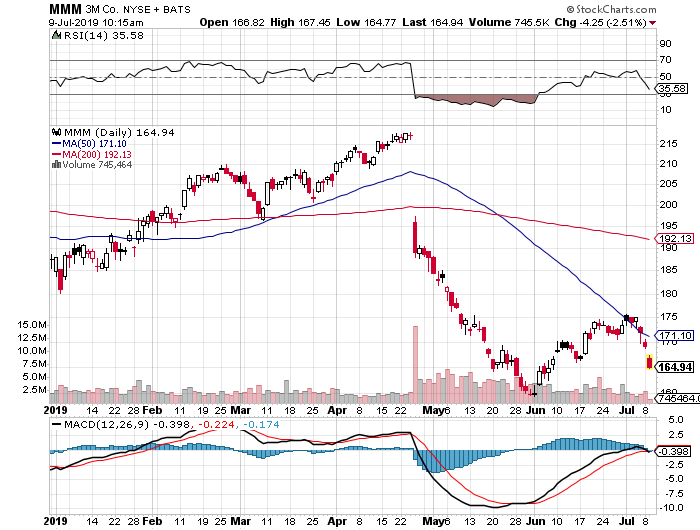 You want to analyze this chart? Yeah, me neither. What a train wreck. Okay, we have an obviously bearish looking daily MACD. We have Relative Strength weak, but not oversold. We probably have a 50 day SMA acting as resistance, but we need to see that work again. I see no reason to risk $165 on a single share of this name based on what I see here. None of the somewhat reliable, or even my more dubious bullish patterns seem remotely evident.

That said, young friends, should presidents Trump and Xi start reading poetry to each other on Sunday afternoons, this thing will move 10% plus, and it won't be lower. Tell ya what. How about we find a nice little risk averse bull call spread just for earnings. It works, it pays for a nice lunch with a pal. It doesn't... the trader can still afford the gas to get home.

How About This? (minimal lots)

Get an email alert each time I write an article for Real Money. Click the "+Follow" next to my byline to this article.
TAGS: Earnings | Investing | Markets | Options | Stocks | Technical Analysis | Trading | Industrials

Bad News Is Better for Market Than Uncertainty

This market is all about the news flow and it is not going to provide much upside opportunity until there is more clarity, even if the headlines are bad.

This market is wreaking havoc with current pricing versus historical moves.

The Chinese people are about to learn the extent of economic distress.

AbbVie Could Be One of the Stocks That Recovers Before Others