Wall Street will be paying a lot of attention to Home Depot (HD)  Tuesday morning as investors look for key indicators on housing and retail heading into the retail sector's all-important holiday season.

A day after his Atlanta Falcons lost to the lowly Cleveland Browns in NFL action on Sunday, the company that Falcons owner Arthur Blank founded also got hammered.

Home Depot shares finished down 3.5% to $179.43 on Monday as the Dow dived by more than 600 points. The company will look to dig out of this hole on Tuesday as a positive earnings release could help repair and renovate Monday's slide.

For the third quarter, analysts are expecting the company to report $2.27 in earnings per share alongside $26.2 billion in revenue, according to FactSet.

The company is expected to guide to full-year, same-store sales growth of 5.3% and full-year earnings per share of $9.42.

The report on the October quarter coupled with guidance amid uncertain macroeconomic factors will try to provide the Atlanta-based home improvement retailer with a positive price implication on earnings for the first time this year.

The main concern sending shares lower ahead of the earnings release is a shaky housing market that is tempering Wall Street optimism on the retail giant.

"Our key message is that we see a period of housing uncertainty ahead, where the demand drivers that have mattered historically seem to be turning less favorable," Credit Suisse analyst Seth Sigman wrote in a research note detailing the environment.

He noted that the stock's pullback in October (shares stood at $212 in mid-September) could help provide relief for investors as the problems ahead appear priced in. But he was hopeful to see clearer demand drivers to make a firm decision.

"A 'wait and see' approach seems prudent," Sigman concluded, issuing a "Hold" rating for the stock.

The key driver of the concern about Home Depot is the recent report on mortgage application decreases, which has been coupled with worries over continued Federal Reserve rate hikes.

Mortgage applications decreased 4% to kick off November and hit their lowest level in about four years, according to the Mortgage Bankers Association's (MBA) Weekly Mortgage Applications Survey.

"Rates increased slightly last week, as various job market indicators showed a bounce back in job gains and an acceleration in wage growth in October," said Joel Kan, MBA's associate vice president of economic and industry forecasts. "Application activity decreased over the week for both purchase and refinance applications, with the overall market index down to its lowest level since December 2014."

The macroeconomic factors holding the sector back promoted pessimism from Real Money contributor James "Rev Shark" DePorre, who noted that a market rally is necessary to lift the stock.

"It is going to take either a very strong market or a much better housing market for Home Depot to return to the September highs," he wrote in his daily Stock of the Day column. "Home Depot not only has to contend with poor market action but worries about higher interest rates and a slowing housing market are major headlines."

He explained that he does not see much bounce ahead for Home Depot shares.

To be sure, the decreased demand for new housing could help both Home Depot and its chief rival Lowe's (LOW) to take advantage of increased home improvement needs from home owners no longer willing to enter the market as a buyer.

"Most signs of 'housing softness' have centered on new construction," RBC Capital Markets analyst Scot Ciccarelli wrote in a research note on Monday morning. "Home Depot and Lowe's only have modest exposure to new construction."

He explained that Home Depot should benefit from renovation and remodeling of homes, which has held up as new construction has slowed, even amid pressure from interest rate pressure on refinancing.

Ciccarelli noted that he too would be reducing his price target based upon some uncertainty in the housing market, but took the view that the macro factors for repair and remodeling remain positive.

The stock will also be helped along by upcoming holiday shopping, dotted most immediately by Black Friday, which will help sales of appliances and tools that often mark the biggest sellers for the retailers holiday push.

Solid wage growth and the strength of the U.S. dollar should reflect positively on purchases during the holidays, which could certainly assuage the myriad of macro concerns stifling Home Depot shares.

The average assessment of the 34 analysts following Home Depot stands reflects an "Overweight" rating and a $210.34 price target, showing continued confidence from the majority of analysts.

"We continue to recommend both [Home Depot and Lowe's] stocks given our positive view on the home improvement segment of the housing market," Ciccarelli explained. "[We] would prefer HD to LOW if we could only choose one given the former's more consistent track record."

Real Money contributor and former NYSE floor trader Stephen "Sarge" Guilfoyle noted that he is likely to remain long on the traditionally consistent company as well. Guilfoyle suggested that if weakness persists into the earnings, buying on a dip could become advisable.

He also ran down his options strategies for the stock here.

One of the largest developments that Home Depot will need to address is the bankruptcy of what was once the nation's largest retailer in Sears.

Investors may be surprised to hear that even shortly before its bankruptcy in October, Sears still commanded billions in revenue driven in large part by its tools and appliances that both Home Depot and Lowe's also supply.

Now both Home Depot and Lowe's will look to capture market share that Sears leaves behind.

Credit Suisse notes that Home Depot is better positioned, with 81% of Sears stores being within a 5-mile radius of a Home Depot. Lowe's still maintains a significant overlap, with 71% of stores falling within the same geographical range.

Additionally, in terms of immediate store closures anticipated by Sears, Home Depot will maintain an edge reflected in the chart below. 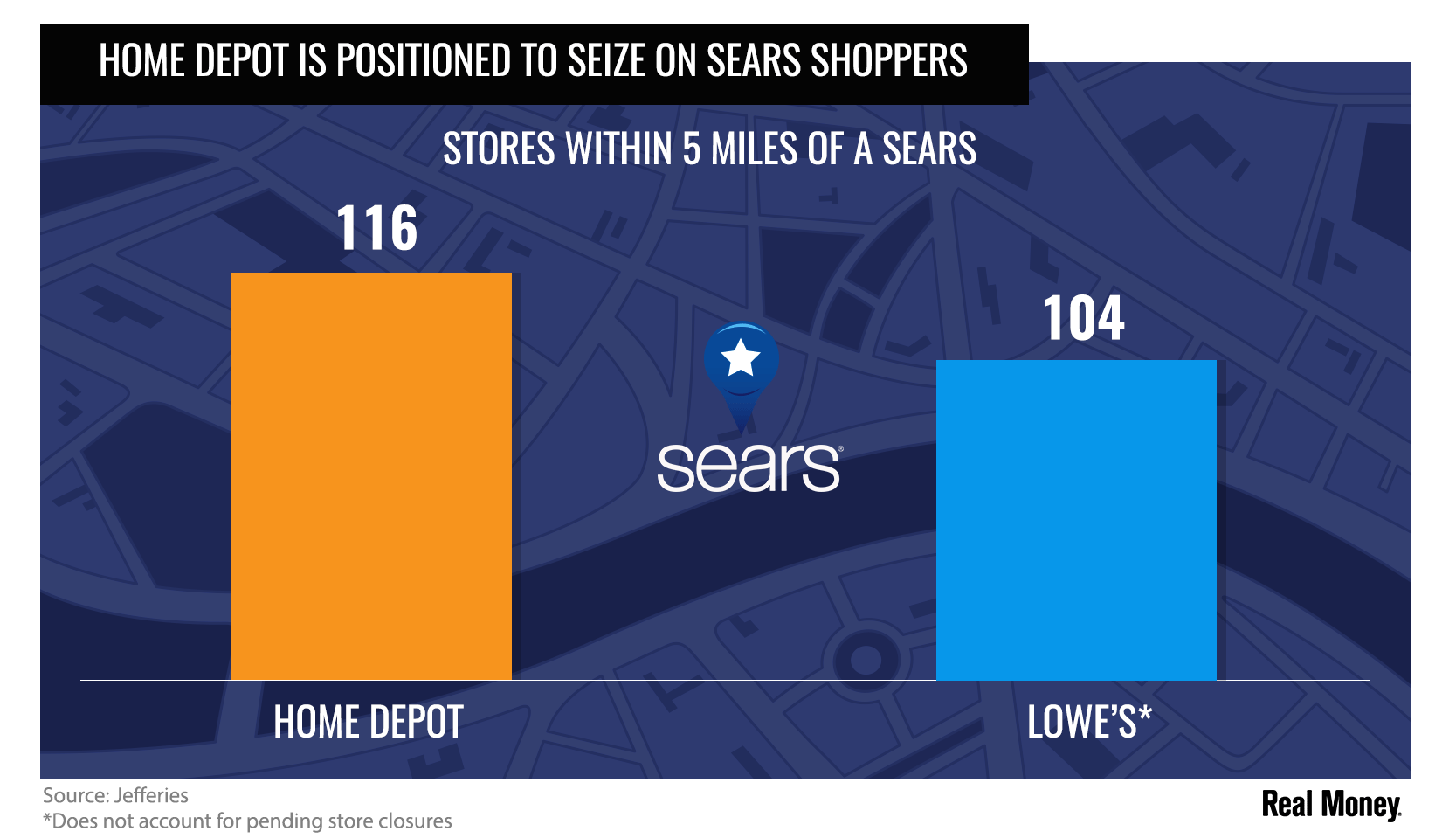 The problem is that Sears may take a parting shot at its competitors through liquidation pricing.

"In the short term, you will get liquidation that will add a little pain for the retail sector," Stacey Widlitz, president at SW Retail Advisors told Real Money upon Sears' bankruptcy announcement. "This isn't great timing for retail as we head into the holidays."

Home Depot shares are rising slightly after hours on Monday as the market prepares for the earnings call, bouncing back from a serious selloff into Monday's close that left shares slightly oversold on the relative strength index as Monday's trading ceased.

The company will look to continue a bounce as it releases its earnings pre-market on Tuesday. The release will be followed by an earnings call directed by CEO Craig Menear at 9:00 a.m. ET.