The Kid is hot tonight

But where will he be tomorrow?

This day is "Jobs Day", kicking off a fairly intense period of highly focused upon macro-economic data-points. Peering into next week, markets will work around new data provided on consumer level inflation, retail sales, industrial production, and housing starts. The markets will do this in earnest as the banks kick off the unofficial start to the reporting season for the fourth quarter. There's more.

Year end bonus money has come already and been put to work, or at least a lot of it has. For the fourth quarter, the Atlanta Fed's GDPNow model is running at a 2.3% annualized clip. Not bad. That number will adjust next week. Currently there are no changes to the Fed Funds Rate target being priced into futures traded in Chicago until December 2020, and that change is a 25 basis point reduction.

I am sure that you have noticed the Fed having to be probably more aggressive than they would have liked to be this week in providing short-term liquidity. Let's not forget that for those who do not pay property taxes on a monthly basis with their mortgage payments, that for most municipalities, six months worth of property tax payment comes due approximately right now. Today. In addition, for those who pay estimated income taxes on a quarterly basis, that deadline is this coming Wednesday. In short, there is about to be less cash splashing around local economies.

On That Note... (It's Important That You Read and Understand This Segment)

Several Fed officials spoke on Thursday. The most important comments for folks to focus upon were made by Fed Vice Chair Richard Clarida. By far. Others danced around targeting the Fed Funds Rate, which is at least for now, is pre-school level stuff. Absolutely meaningless.

Clarida spoke to concerns of liquidity, or lack thereof. Like it or not, the Fed taking on these issues in response to last September's stutter-steps is the primary driver behind the wonderful numbers many of you now see on your 401k, and IRA statements.

First, Clarida said "As long as incoming information about the economy remains broadly consistent with this outlook, the current stance of monetary policy will likely remain appropriate. Of course, if developments emerge that, in the future, trigger a material reassessment of our outlook, we will respond accordingly." Yadda, yadda, yadda. Nothing complex there. Basic statement that could have been easily prepared by any freshman helping out in an economics department. Then he got tough, sort of.

Clarida got into liquidity. "Ultimately we do think that the plan announced in October ($60B per month, not-QE program targeting the short end of the curve) and that we are implementing, will get reserves up to the ample level. Once we get to that point, certainly we would not be expecting to have ongoing large repo operations as necessary." Now, when announcing that balance sheet expansion program in October, March had been thrown around as an end date. Yeah, fairly stupid, but they did say through March. Clarida also said: "Some repo might be needed at least through April, when tax payments will sharply reduce reserve levels." Hmm.

So, the Fed clearly wants to safely exit their short-term lending, liquidity providing operations, once the balance sheet is large enough to accommodate potential liquidity shortfalls. Okay, so we're in the repo markets at least through April. Clearly, the Fed would not be so reckless as to halt those repo operations as well as the aggressive purchasing of T-Bills all around the same time headed into a national election. Right?

Be cognizant of this threat, young pups. Even if not implemented until after the election, markets could see the need to start pricing in these moves ahead of time. The pound of flesh needed to be taken could weigh a couple of pounds by then. We may not appreciate the lack of purity in price discovery in this modern environment. I do not. That said, even mention of pulling back on these two programs will cause something akin to a taper tantrum across asset classes. Would this Fed even go there? This year? After the stunning policy errors made in 2018? After the consistent misinterpretation of economic realities made by other Feds since the financial crisis (or really since 1913, if you choose)?

Earlier this week, we talked about dividends here at market Recon. U.S. corporations paid out a record dollar amount in dividend payments in 2019 for the eighth consecutive year. 2019 aggregate growth of 6.4% on top of 2018 aggregate growth of 8.7%. Huzzah. I think.

Rapidly appreciating equity prices create a nasty bi-product. That would be rapidly decreasing dividend yield. Quiz. When on television, I have been asked several times about when I thought this bull market would end. Anyone remember the answer I usually respond with? Anyone? No? Okay, I'll remind you. This bull market will end when Treasuries pay enough of a yield to attract conservative investment away from equities. So simple.

Yes, equities can rise in value, and usually have, so there has to be a substantial disparity, unless the folks get nervous, which is not what happened in response to the "Glorious Wednesday" War between the U.S. and Iran.

In short, the S&P 500, using the SPDR ETF (SPY) as a proxy, now yields just 1.67% versus a 15 year average of 2.07%. according to data provided by Investors Business Daily, S&P Global Market Intelligence, and S&P Dow Indices. In fact, of the 11 sectors, using the Sector Select SPDR ETFs as proxies, only Energy (XLE) at 3.22% now yields something greater than its historical average. Some sectors are now well below their own historical averages. Forget the pull of corporate paper, this morning, the U.S. 7 year note pays 1.77%, the U.S. 10 year? 1.86%. Are we there yet? No, but even the 5 year note is competitive at 1.66%. At no risk to principle, all you need to see is a period of under-performance in equities to swing demand... which of course would suppress these yields and their allure. Inconclusive? For now. Keep it on your radar.

Have not mentioned this mortgage insurer in quite some time. Yes, I am still long this name. In fact, I've increased my long position this week. Why would I add to a name trading at two month lows, even as the equity markets have soared? Good question.

You see, Essent (ESNT) trades at just 8 times forward looking earnings, plodding along very quietly at sales growth around 20% every quarter, earnings growth too. What they do best, and probably better than anyone else, is maximize who they are. They make money. Period. Operating profit of 77.2%. More cash on hand than total debt. Debt to equity, rounds off to zero. Six quarters of rising fund ownership. Four consecutive years of annual EPS growth, with two more projected. (They've only been public since late 2013.) Part of the problem has been the industry which ranks well below the median in terms of equity performance. I may be wrong, but I think this little guy is cheap. Dirt cheap. 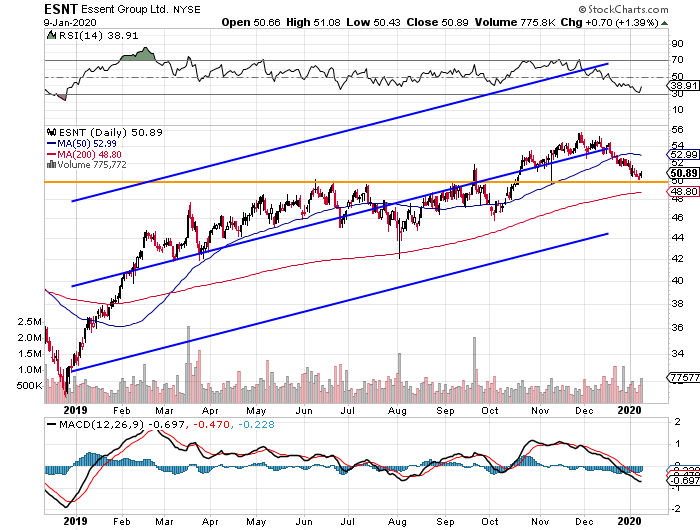 See the orange line? That's why I added this week, even with the shares trading well above net basis. That line has provided support as recently as November and proved to be stiff resistance as well last spring and summer. The algos see that line. If it fails, the 200 day could potentially come to the rescue just below $49, so there is help nearby. Essent reports in early February, so we still have time to see how this plays out before decision making becomes crucial. My target price remains $60, my add moves down to the 200 day line from 50, and my panic stays put at $45.

(Facebook, Alphabet, Salesforce.com, and Apple are holdings in Jim Cramer's Action Alerts PLUS member club. Want to be alerted before Jim Cramer buys or sells these stocks? Learn more now.)

Get an email alert each time I write an article for Real Money. Click the "+Follow" next to my byline to this article.
TAGS: Economy | ETFs | Federal Reserve | Investing | Markets | Stocks | Technical Analysis | Trading | Treasury Bonds