Got a beat-up glove, a home-made bat

And a brand new pair of shoes

Just to hit the ball and touch 'em all, a moment in the sun

It's a gone, and you can tell that one good-bye

Moment In The Sun

Refreshing it was, to see a new champion sit atop the world of college football. Far less positive for sports fans, it was to learn just how legitimate a complaint Los Angeles Dodgers fans probably have, and by extension, New York Yankees fans. These two franchises have lost titles over the last few years, now severely tainted in the eyes of all baseball fans. Sad day for the sport. Sad day for all who cherish the spirit of competition, all who enjoy the chess game played out on the field in front of them. Just sports, you say. Honor clean, I counter. Doesn't matter? Always matters.

Monday brought more record highs for the broader equity indices. As a trader, the feeling is so eerie. I'm not kidding. It has become almost like... "don't sell anything out of inventory", and certainly... "do not sell anything short, nothing." Thank goodness I no longer have to worry about accommodating institutional clients. Can just imagine those conversations? The pressure on the fund to take down a chunk of merchandise, and the pressure on the trader to offer a competitive enough price to keep the order away from the competition. What premium required in order to expose one's P/L to such risk. Good client or not... imagine getting short a million or more shares of anything in this environment just to get a multi-million share buy order in the door. Then you'll have the guy who just picked you off buying the darned shares outside of you... and you'll thank him for the business... all with the firm's risk manager (They didn't exist when I was young, or at least if they did, if you told them to "beat it", they better well do so) asking you what's going on every 15 minutes. No thank you.

Talk about broad-based. Materials may have led the way, but internet based names, software, semiconductors, financials, defense, and the transports (ex-airlines) were all hot. Trading volumes again were higher on an "up" day following a "down" day, even if the down day happened on a Friday, and the up day on a Monday. Nearly everyone was invited to this party, room was even made for the small caps. The Russell 2000 may have performed in line with the S&P 500, but the S&P 600 out-performed all except the Nasdaq Composite and Nasdaq 100.

The say that speed kills. I have to say that the speed with which this rally has taken hold of equities over the past quarter or so, has certainly reached a point of discomfort for those of us who extract our living from these markets. Don't get me wrong, I'm thrilled to benefit from continuing along with a now, very imbalanced net-long portfolio, but to say that markets would behave the same way were humans still in control of the point of sale would be disingenuous. Humans would not in mass add risk at what appears to be technically dangerous levels, or at least not without a period of digestion. Check this out. 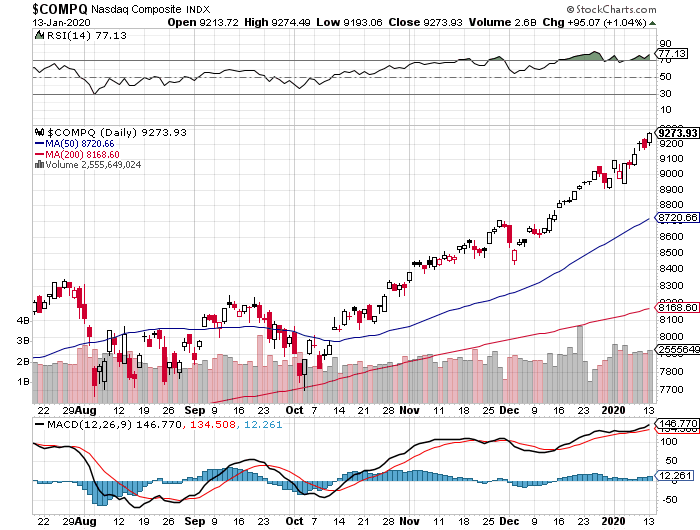 Forget the daily MACD, those EMA's (Exponential Moving Averages) have reached the stratosphere. Take a look at the Nasdaq Composite's RSI (Relative Strength Index) of 77. We have seen 77 before. That's hot, but not unheard of. What blows my mind for those of you maybe new to this sport, is that RSI's are for the most part, considered to be at the threshold of "overbought" territory when they cross the 70 level. The Nasdaq Composite has literally made use of that level as "support" for a month. No joke, cowboy. That condition is not true for the Dow Jones Industrial Average, nor for the S&P 500. This condition is true for the Nasdaq 100, and for the Technology Select Sector SPDR ETF (XLK) . Moment in the sun. That brings us to...

Up. Up and Away... Jump on board? Too late for that, at least for me. Short Tesla (TSLA) here? Had that thought at $430. Good thing I only think those thoughts. Ever have a tomato for dinner? Short interest in the name, last reported at year's end was indeed down significantly from October, which makes sense, because the shares are up more than 130% since the low of that month. 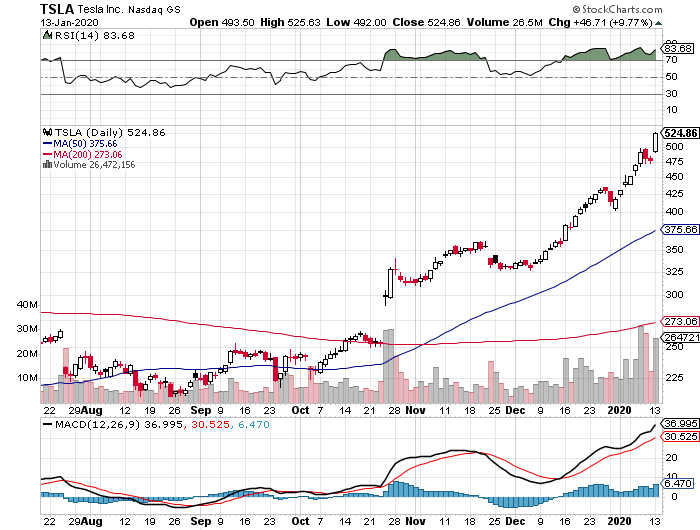 In fact, incredibly as this capitulation in motion continues, Tesla closed on Monday at a 40% premium to its own 50 day SMA. Long the name? Then congratulations are in order. You have held out through Baird's call to take profits, and then new price targets of $553 at Piper Sandler, and $612 at Oppenheimer. I probably would have sold the shares and bought one of the cars by now. Heck... Nice job.

The Book of Genesis tells us that on the seventh day, the good Lord rested. Some say that on the eight day, Rock and Roll was created. I am not sure what day it was, but at some point, bank earnings came along. They come along again this week, starting today. Most likely before you read this piece, you will have heard from the likes of Citigroup (C) , JP Morgan (JPM) , and Wells Fargo (WFC) with Charles Scharf at the helm. There are three items that investors will focus on more than everything else this day, perhaps more than earnings per share and revenue.

1) Net Interest Margin... How profits are won through traditional banking means. Like it or not, banks can find a thousand ways to make money... this metric is ultimately how the industry is valued relative to broader markets.

2) Loan Growth... Important for the individual bank reporting the numbers? Yes. Far more important as a real-time temperature taker in terms of both business and consumer sentiment.

3) Tangible Book Value... Literally the main reason why I am usually long Citigroup. The firm is semi-permanently undervalued according to this metric. What is the value of a bank if forced to liquidate all businesses and positions at current values? Let you know in a few minutes. BRB.

Is it good if the U.S. Treasury Department lifts China's label as a currency manipulator going into this week's meetings on trade in order to get things off on the right foot if...

1) The U.S. resents the UK's Boris Johnson with a new dossier that challenges the ability of the British government to mitigate risks associated with integrating Huawei equipment into the nation's 5G technology network?

2) A U.S. trade delegation meets with counterparts from Japan and the European Union in Washington DC today, one day ahead of the expected signing of the Phase One trade agreement between the U.S. and China? What are the U.S., EU, and Japan expected to discuss? Trade policy and subsidies paid by China to state-owned firms. Can't make this stuff up.

Asking for a friend.

Wow. When good guidance gets better. Pretty sure I am the last one in my gym wearing a Kiss T-shirt, Adidas shorts, and 1970's style basketball socks.

Seems like just days ago. In fact it was. I said to myself.... "Self, why are you still long Zscaler (ZS) , are you even paying attention?" How quickly can a non-performing long position become an above average year to date performer? Snap your fingers. C'mon... just do it. Yeah, that fast. First, tensions between the U.S. and Iran create the idea that war is coming that might just be more cyber than military in nature. Then the extremely highly rated Alex Henderson of Needham, after meeting with Zscaler's management, maintains his Strong Buy rating and his $89 price target. Henderson refers to Zscaler as having the "best platform", and beat this... Henderson claims that the architecture at Palo Alto (PANW) is "incapable of competing with Zscaler." By the way, TipRanks rates Henderson at number 152 of the 5,790 analysts that they track.

In addition, on Monday, the New York Fed released a research title aptly named "Cyber Risk and the U.S. Financial System: A Pre-Mortem Analysis" ... you get the drift. Those interested can find the document here.

In short (very short, the document is 37 pages), authors Thomas Eisenbach, Anna Kovner, and Michael Junho make the point that "A cyber attack on any of the most active US banks that impairs any of those bank's ability to send payments would likely be amplified to affect the liquidity of many other banks in the system. The extent of the amplification would be even greater if the banks respond strategically, which they are likely to do if there is uncertainty about the attack."

Hmm, guess hanging in there, and adding near the bottom wasn't so stupid after all. Every once in a while, an acorn. 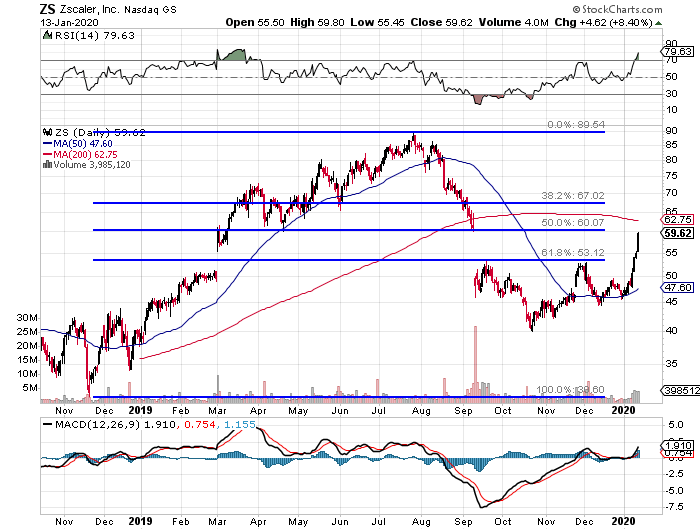 Of course, there is nothing wrong with ringing the register here. There never is anything wrong with realizing a profit. For those hanging in there, this move has gone semi-parabolic, and there is traffic to our 12. Before the algos see the 200 day SMA at $62.75, they'll see the 50% retracement level ($60.07) of the November 2018 through July 2019 rally. In fact, that spot has been tested through the overnight. For those wondering where Henderson found his target, just take a look at the top of the chart. My target price is $67.

(Citigroup and JP Morgan are holdings in Jim Cramer's Action Alerts PLUS member club. Want to be alerted before Jim Cramer buys or sells C or JPM? Learn more now.)

Get an email alert each time I write an article for Real Money. Click the "+Follow" next to my byline to this article.
TAGS: Earnings | Investing | Markets | Options | Stocks | Technical Analysis | Trading | Banking | China

Here's the Secret of How 'Hidden Assets' Can Be Very Valuable

Let me show you how writing calls in tax-sheltered, or tax-free accounts is a legal way to allow for higher-than-annual individual maximum contribution limits.