Being an investor in the small biotech space requires the patience of Job at times. The sector consistently goes through bouts of euphoria always followed by longer periods of negativity. Just look at the chart of the SPDR S&P Biotech ETF (XBI) over the past five years. 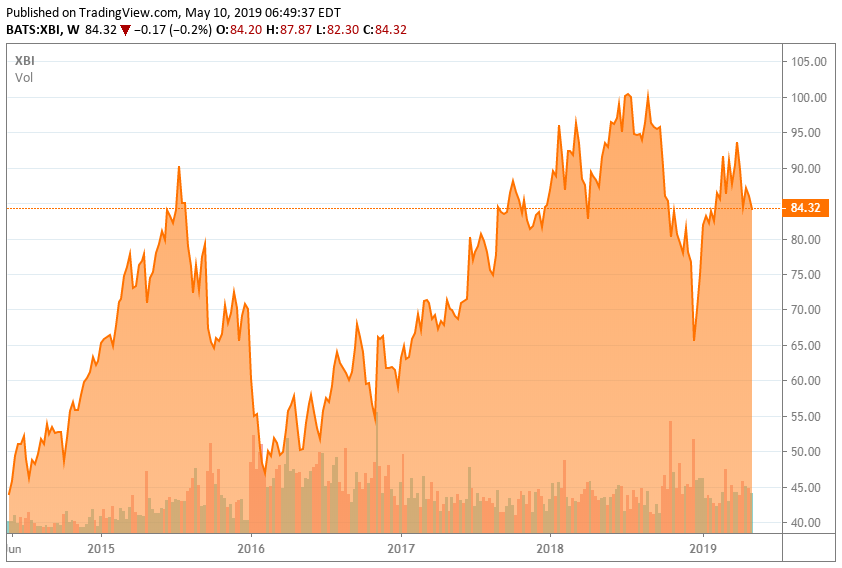 Despite most of the market indices being at all-time highs until this week's pull back, the small biotech sector is slightly below where it was during its last peak of July of 2015. That is almost four years. Of course, the sector had quadrupled over a few years leading into that last peak.

Few parts of the small biotech space are more frustrating that what I have dubbed 'Tier 3' biotech concerns. These are companies that have recently got FDA approval for the primary products in their pipeline but are some ways to profitability. A non-biotech investor would think FDA approval is the biggest hurdle for most small biotech companies and would be rewarded by the market.

Unfortunately, that is not the case. This is why so many small biotech stocks frequently decline in the quarters following the initial euphoria of FDA approval. Developing a drug and getting it through the approval process is a daunting and complex endeavor. Making it successful commercially can be just as challenging. There are sale forces to be built, doctors and consumers to educate, and government as well as private insurance networks to get the necessary approval from for coverage.

This is why initial drug rollouts are usually slower and consume more cash that investors expect after the FDA green light is granted. This is a primary reason so many of these stocks have significant pullbacks soon after FDA approval. This is also why I sell covered calls against most of my small biotech stocks leading into an FDA decision. It is a good risk mitigation device. While there are some exceptions like Sarepta Therapeutics (SRPT) where money is left on the table, this is usually the right way to go.

Fortunately, two stocks that have gone through this journey and have lost significant value since their FDA approvals showed some good commercialization progress during their first quarters. These Q1 results resulted in both names rallying over 15% in trading yesterday.

Let's start with Flexion Therapeutics (FLXN) that posted revenue from its recently approved product Zilretta of $10.6 million. This was inline with estimates and up from $9.5 million of sales in the fourth quarter and an almost 400% increase from the year ago period. More importantly, initial sales for April came in at $5.1 million showing an acceleration of sales growth. The company confirmed full year revenue guidance of $65 million to $80 million. April sales numbers gave those estimates credence.

Dynavax Technologies (DVAX)  also reported revenues in line with estimates. Sales of its recently approved hepatitis B vaccine 'Heplisav-B' came in at $5.6 million, 44% above the previous quarter. The company made good progress in the quarter getting the vaccine into the hands of its key accounts and reorder activity was strong as well. Dynavax has some posters for another developing pipeline asset at the big ASCO conference in a few weeks. I could also see a partnership deal for its oncology compound 'SD-101' as some point during 2019.

Both stocks had big relief rallies on these solid results. While too early to tell for sure, Q1 reports could end up being significant inflection points for the companies and their shareholders.

Get an email alert each time I write an article for Real Money. Click the "+Follow" next to my byline to this article.
TAGS: Drug Approvals | Investing | Markets | Stocks | Trading | Biotechnology