For his second "Executive Decision" segment during Thursday's Mad Money program, Jim Cramer spoke with Darius Adamczyk, chairman and CEO of Honeywell International, on his company's plan to vaccinate one million North Carolinians over the next six months.

Adamczyk explained it's up to all of us to get those doses into the arms of everyone as quickly as we can. He said the challenge is not simple. Mass vaccinations involve storage, distribution, administration, supply chains and record keeping, which is why Honeywell is partnering with other entities to get the job done.

What Honeywell hopes to do, Adamczyk said, is build a model that other states and other partnerships can follow to handle the massive flow of people. In the case of their North Carolina efforts, they'll be using the Carolina Panthers stadium to help get tens of thousands of people vaccinated every day.

Let's roll up our sleeves and check out the charts of HON.

In this daily bar chart of HON, below, we can see that prices plunged from February to March from around $180 to near $100 before rebounding into April. We can see a temporary pullback in May that can be considered a retest of the March nadir. HON rallied to early November where we can see an upside price gap. Prices have stalled and declined slightly the past eight weeks.

HON is testing the rising 50-day moving average line. Trading volume has been declining since early November which would be typical for a consolidation pattern but On-Balance-Volume (OBV) line shows a slight rise over the same time period. Buyers of HON have been more aggressive but prices have actually slipped.

The Moving Average Convergence Divergence (MACD) oscillator has been in a take profit sell signal since November and is now close to the zero line and a possible sell signal.

In this weekly Japanese candlestick chart of HON, below, we can see a bearish engulfing pattern at the beginning of December. This reversal pattern has marked a high for now. Prices are still well above the rising 40-week moving average line but the weekly OBV line has turned down.

The MACD oscillator has narrowed and is close to a bearish downside crossover. The trend strength has been weakening for several weeks.

In this daily Point and Figure chart of HON, below, we can see a potential upside price target of $303 being projected. We also see that a small decline could turn this chart from bullish to bearish. 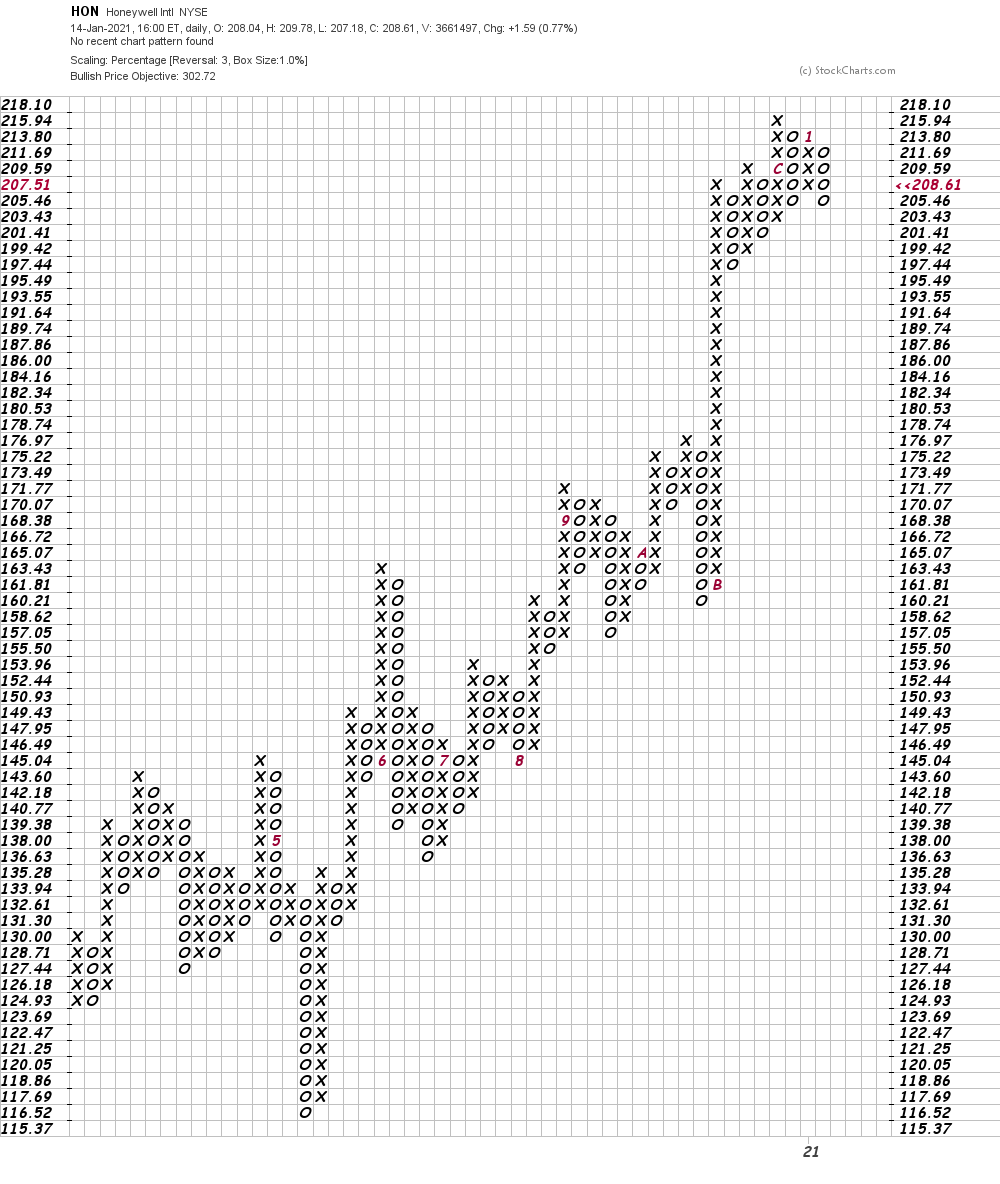 Get an email alert each time I write an article for Real Money. Click the "+Follow" next to my byline to this article.
TAGS: Investing | Stocks | Technical Analysis | Trading | Industrials | Manufacturing | Mad Money | Executive Interview | Coronavirus

I'd Like to 'Affirm' My Views on Affirm Holdings

The fundamental story here is strong on AFRM.