Home Depot (HD) reported the firm's second quarter financial performance on Tuesday morning. The firm posted EPS of $4.53, which beat Wall Street by a dime or so. Revenue generation also beat consensus view, at $41.12 billion. Though both numbers did better than what had been projected, the bottom line result was good for year over year growth of 12.7%, coming off of four consecutive quarters of 20% plus growth and Q1 growth of 86%. The top line print showed 8.1% growth, after four consecutive quarters of 23% plus growth. The base effect dished up by the trough of the pandemic slowdown appears to be over for Home Depot.

The problem this morning for the stock has less to do with decelerating top and bottom line growth than it does with same store sales. The firm tells readers right at the top of the press release that Q2 comparable sales increased 4.5% globally, and 3.4% in the U.S. The issue there is that Wall Street had growth of 5.6% and 4.9% in mind, respectively. Digging in a bit, total customer transactions were down 5.8% from a year ago to 481.7 million. There was a bright spot however, as those transactions produced an average ticket of $82.48, which was up 11.3%.

I know that we can not predict the path of the pandemic and where there may be future regional lockdowns or a "voluntary" reduction in human interaction. That said, the helicopter money that fiscal authorities rained down on the American people has dried up. Now there are bills to pay, and likely less government protection having to address those bills. The Census Bureau put July Retail Sales to the tape while I was writing this piece and they were awful. Contraction had been expected. These retail sales were awful.

I understand being unable to offer any kind of full year guidance in this environment, but I don't like it with two quarters in the books. I would have liked to hear something.

Cash is down significantly from both a year ago, and from six months ago. I already mentioned that inventories have increased. Total assets are generally in line with six months ago, and edges current liabilities. The entry for Goodwill is in line with six months ago, but significantly larger than a year ago. Not thrilled with that. Total assets also edge out total liabilities less shareholder equity. However, long-term debt is (though not larger) rather large. If the firm had left Goodwill where it was a year ago, total liabilities would be larger than total assets. Not gonna lie. Not thrilled here. 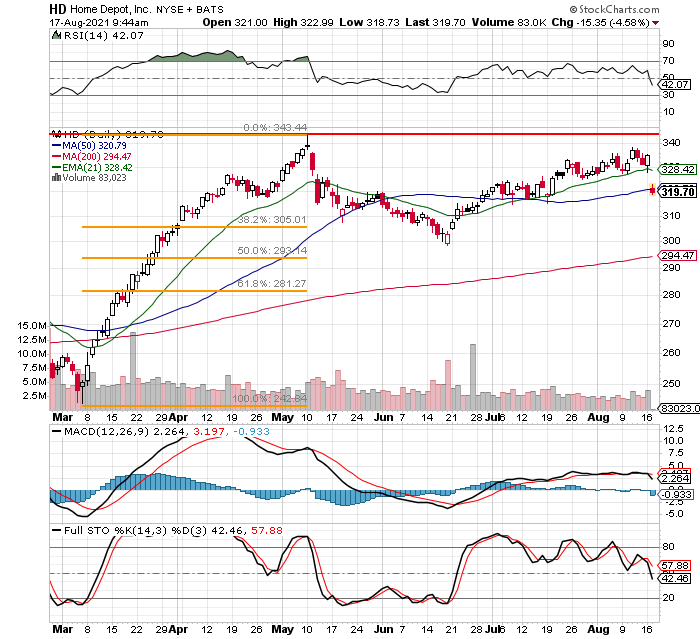 Two things going on here. One, HD has created a significant gap between $328 and $323 this morning. Gaps usually do fill. There could be a "buy the dip" trade there. However, the shares have given up the 21 day EMA (shaking out the swing traders) and are now struggling with holding the 50 day SMA. That will rattle portfolio managers.

If you are like me, you are already long HD. You are probably up nicely. Adding this far above net basis might be prohibitive for an investor. A trader can trade around a core position and not lose focus, but an investor who does something else occupationally, might not look at the portfolio every day.

I will probably in addition to my standing long position, also put on a trading long on this dip. The intent would be to turn a couple of bucks and get out of the trade in a day or two. As for my long-term position, and this may be more important to most of you, I will liquidate on a failure to rally around that 50 day line... because in my opinion, that swings wide open a door to that 50% retracement level ($293) that you can see on the left. That's what the PMs will do, and I just surf here.

Get an email alert each time I write an article for Real Money. Click the "+Follow" next to my byline to this article.
TAGS: Earnings | Economy | Investing | Stocks | Technical Analysis | Trading | Housing Market