I have been in and out of (mostly in) Home Depot (HD) for perhaps longer than any other name that I am currently long. I have always had a soft spot for Home Depot. Not just the stock, but the smell of the place, the layout. Literally a toy store for those with the time and energy to try. Of course half of the time the projects fail due to lack of expertise, and half of the time projects are left half done as time runs short. The other half of the time (Hey, wait a minute...), one is left with a feeling of accomplishment and a spouse that sounds impressed. It's that last half that keeps us coming back for more.

For the firm's fourth quarter, Home Depot reported EPS of $2.65 which did beat consensus view by a few pennies even if falling short of whisper numbers heard around the street. Revenue generation for the period totaled $32.26 billion, good for annual growth of 25.1% and walloping expectations by more than $1.6 billion. Impressive. Comp sales printed up 24.5%, well above projections in the high teens, but that revenue number, though quite spectacular, ended up leading to what might have been a minor-ish problem for the quarter. You see, gross profit printed at $10.831 billion, up 24%, and operating income hit the tape at $4.083 billion, up 20%, so in essence... 25% revenue growth led to 24% growth in gross profit which led to a 20% increase in operating profit. In other words, sales performance was elite, but margins ended up being compressed. In fact, gross margin of 33.6% did fall short of both consensus and Q4 2019 performance, as did operating margin of 12.7%.

The problem with the guidance, and probably more of a problem for Wall Street this morning than smallish misses on margin, was that there was no guidance. CFO Richard McPhail stated, "As we look ahead to FY21, while we are not able to predict how consumer spending will evolve, if the demand environment during the back half of FY20 were to persist through FY2021, it would imply flat to slightly positive comparable sales (that does not really excite) growth and operating margin of at least 14%." That operating margin would truly excite me as an investor, especially if the non-guidance ends up being overly cautious.

Three Items To Bear In Mind

1) Lowe's (LOW) reports Wednesday (tomorrow) morning. This is the true comparison as far as I am concerned. Even more important than year over year.

2) Home Depot declared a $1.65 quarterly dividend this morning, an increase of 15 cents payable March 25th to shareholders of record on March 11th. This, along with this morning's selloff, bring the firm's forward dividend yield up to 2.49%.

3) Net earnings were negatively impacted for both the quarter and full year by non-recurring, pre-tax expenses related to the acquisition of HD Supply. The deal closed on December 24th, 2020, and probably shaved net earnings by a rough $110 million or $0.09 per share.

Springtime beckons. What I mean by this is that spring is usually Home Depot's strongest season as homeowners get their property in shape, but this year it's more. Folks who have been in need of home repair, but afraid to invite contractors and their crews into their homes may become less fearful as the vaccines work their magic. That brings back improved sales to professionals such as plumbers, electricians, and carpenters, etc. Home Depot has not provided guidance. As one who is long the shares, I am thinking big things for spring.

Think of the CFO's words... "if the demand environment during the back half of FY20 were to persist through FY2021" .. well, folks, the back half of 2020 had no springtime, and the world was scared to death last spring. Fired up? I am. Buy the dip? I will. 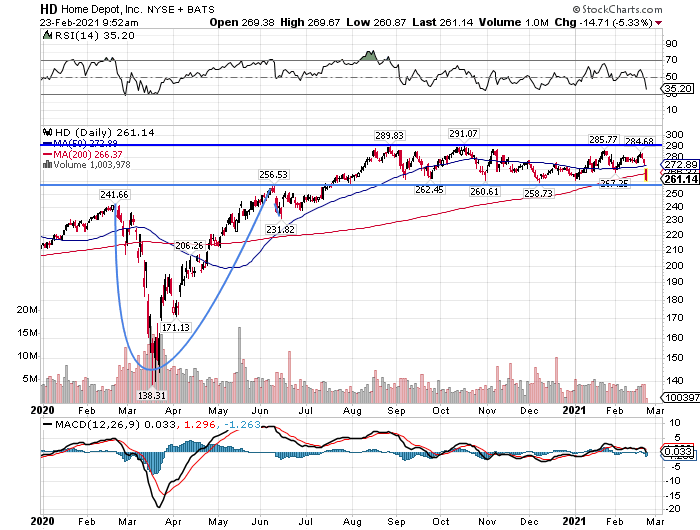 This morning, down more than 5%, HD threatens basing support at the $258 level that has been the bottom of a trading range that has been in place since late July. That's a long time, and the algos see that. This morning, we have seen some portfolio managers panic as both the 50 and 200 day SMAs have cracked overnight. Take another look, up close.

Get an email alert each time I write an article for Real Money. Click the "+Follow" next to my byline to this article.
TAGS: Earnings | Investing | Stocks | Technical Analysis | Trading | Construction & Engineering