I told you this morning to never fall in love with a name. The Home Depot (HD) is a tough name not to fall for. Anyone who has been long this stock for a number of years, myself among them, has enjoyed gains measured in hundreds of percentage points. Not so bad for a retailer. That said, this firm is no ordinary retailer. Truth is, that the party sort of stopped in early 2018,, and the shares have sold off hard more than once, only to come back and hit resistance in the same general area three times.

On Tuesday morning, The Home Depot will report first quarter financial performance. Wall Street in general expects to see EPS of roughly $2.19 on revenue of $26.39 billion. If those numbers come to fruition, that would be earnings growth of 5.3% on revenue growth of 5.8%. The stock trades at 17.5 times next year's earnings projections. That makes HD just a little expensive relative to the S&P 500, but far cheaper (roughly 21 times) than the those names that comprise the Consumer Discretionary sector.

Earlier this year, the firm guided comp store sales growth toward 5% for the year, despite Q4 performance of 3.2% for this line item. Earlier this month, JP Morgan analyst Christopher Horvers cut his forecast for this number to 3.7% for this quarter, a full percentage point below industry consensus. We all know what a wet, cold spring season it has been for large swaths of the country. Allowing that many corporations use poor weather as a crutch when under-performing, this is one case where I think it justified. By the way, Horvers also lowered his expectations for comp store sales growth for HD rival Lowe's (LOW) , and cited weather as a reason. LOW reports on Wednesday. Remember, there did appear to be a "closing of the sales gap" going on between the two for the fourth quarter that continued into January, so this metric is absolutely key.

The trade war, and potential pressure on Operating Margin, will also be a focus. The firm guided this number toward 14.4% coming off of a 12.8% number for Q4, which was seen as a disappointment at the time.

There are some positive vibes out there. Last week, Oppenheimer's Brian Nagel increased his price targets for both firms... HD to $215, and LOW to $135. Nagel's view is that the recent decrease seen across the spectrum of interest rates will shore up demand for housing. When housing is hot... well, sellers of goods related to homes get hot too. We do seem to finally be witnessing a bottoming of the housing market, so there may be something to this thesis. According to TipRanks, over the past three months, 16 analysts have set or reset price targets for Home Depot. The average price target for that group is just above $209. 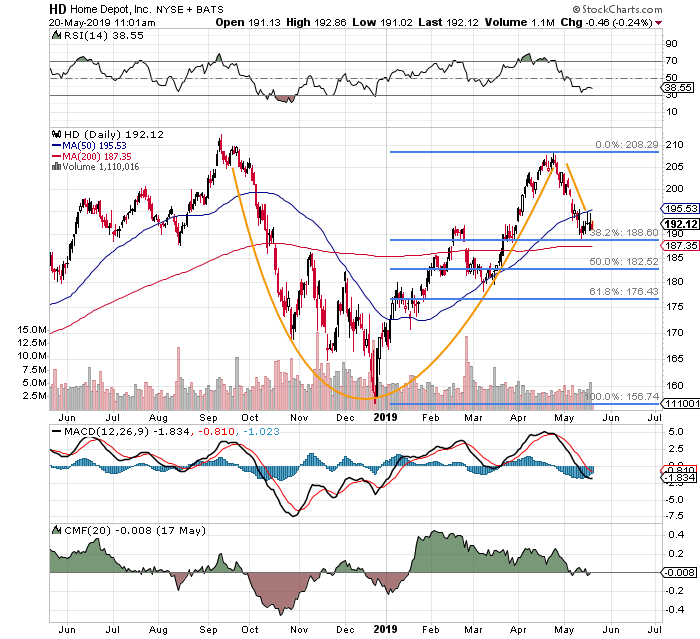 Technically, these shares may be setting up for a nice move higher. The average analyst price target of $209 is very interesting here because you'll notice that the yellow cup with handle formation displays a pivot point (highest point on the right side of the cup) above $208. Then the formation of the handle finds support at the 38.2% Fibonacci retracemment off of the December through April rally.

This means that there is more than one chart pattern telling us something along the same lines. Of course, that $208 pivot is still 16 points away. We'll need the help of our medieval Italian mathematical friend in order to just get the point of lift-off. So, we're playing the long game here. May just get some help form the daily MACD as well if the numbers look okay in the morning.

In theory, I'd like to see a move toward pivot that would allow a price target up around $240. No other analyst is even close to that bullish, so maybe I'm wrong. Maybe not. That's what makes a market. Also in theory, if the shares should respond badly to earnings, I'd like to add a bit. We have already see $188 support. A poor result would almost ensure a re-test, and perhaps even a test of the 50% retracement level should China end up mentioned as a factor in the earnings call.

I am already long the equity.

Notes: What I'm doing here is trying to get paid, while allowing for potentially increased equity risk at levels that I find acceptable on the chart. The sale of the call is for that purpose as well, as my expectation is that the $200 level would be out of range for this week. If called away, so be it. This would still be a wildly profitable trade.

Get an email alert each time I write an article for Real Money. Click the "+Follow" next to my byline to this article.
TAGS: Earnings | Economy | Investing | Markets | Options | Stocks | Technical Analysis | Trading | Retail