It's been five days since we last covered Nvidia (NVDA) . In that time, not much has changed, but a lot has changed. First, here's a quick look back at my thoughts from late last week.

The stock is getting a boost from a Bernstein upgrade to Outperform this morning. The analyst likes the clean gaming profile, specifically the lack of crypto influence. Ironically, this was my third sentence last week. The analyst added the company has clarity as management reenters the zone. I think that would qualify with the second sentence I wrote in last week's article. They added improved Turing traction and a return to hyperscale builds should remain a catalyst moving forward.

As the company enjoys strong double-digit top-line and triple-digit bottom-line growth thanks to the huge ramp in data center revenue, there's a lot to like. Although AI and deep learning haven't translated to huge profits and revenue yet, they are growing faster than anticipated with the company cementing itself as a leader in the field, specifically, in the cloud data centers and with webscale customers.

We haven't heard much in the way of the coronavirus impact on the stock, but expect management to shed some light on the subject on March 2nd when the company presents at the Morgan Stanley Technology, Media, and Telecommunications Conference. Mark that date on the calendar if you have a position long or short as you may want to consider protective action before the company speaks. 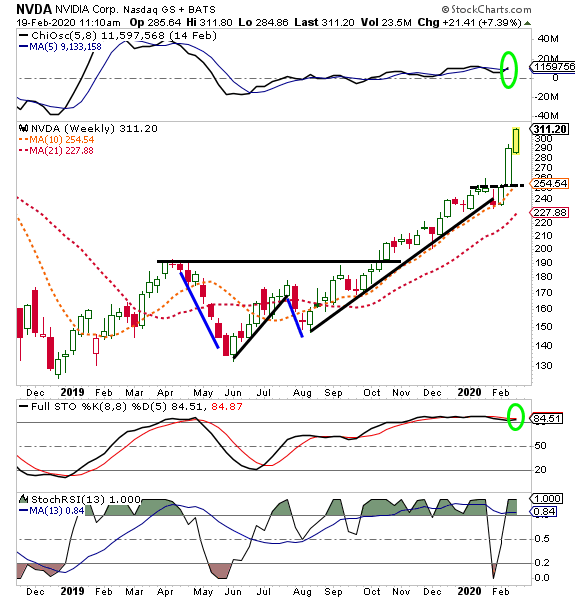 The technical pictures hasn't changed. You hold Nvidia until it gives you a reason to sell. Granted, we have now added another $20 (7%+) to the price since February 14th, but strength is strength and overbought can become more overbought. Bulls may kick the stock into another gear as we have a couple of bullish crossovers in secondary indicators; however, I wouldn't get too excited. These crossovers are coming after the price breakout, so I view them more as confirmation rather than leading. We're well above obvious price support with the move over the past two weeks, so I would likely pinpoint this week's low as my trailing stop. Another stop consideration could be the 8-day simple moving average or 10-day SMA, but those are both left in the gap of the post-earnings move.

I'd approach this one as I already said: hold it until you have a reason to sell, and keep the March 2nd conference in the back of your mind if you've taken no action before that date.

Get an email alert each time I write an article for Real Money. Click the "+Follow" next to my byline to this article.
TAGS: Investing | Stock of the Day | Markets | Stocks | Technical Analysis | Trading | Semiconductors & Semiconductor Equipment | Technology