According to Adobe (ADBE) Analytics, shoppers spend $9.12B online on Black Friday. This was up 2.3% from the year ago comp, and though many across the financial media have talked up that number as proof that American consumers are bulletproof, the fact is that these numbers are not adjusted for inflation and 2.3% growth in real-terms becomes contraction once one factors in a year over year CPI of 7.7%.

The situation for those engaged in e-commerce did however improve on Cyber Monday. At last glance, Adobe had Cyber Monday headed for an estimated $11.6B in online sales. If that number holds, that would be up 8.4% from the $10.7B spent last Cyber Monday. Now, for e-tailers and Amazon (AMZN) is the largest by far, this is good news.

Bloomberg News is reporting that Amazon Web Services, the largest provider of cloud computing and by margin, the most profitable part of the Amazon empire, has announced that it would permit customers to rent computing power reliant on a new generation of Graviton chips. This newest chip will aid in the firm's effort to build more of its own equipment powering the data centers behind AWS.

The firm states that through manufacturing some of its own chips will be cost-effective for both the firm and its customers as opposed to purchasing all of its chips from the likes of Intel (INTC) , Nvidia (NVDA) and Advanced Micro Devices (AMD) . In an odd relationship, Amazon remains a client of these firms for the provision of high-end chips, but is also in direct competition with them at the same time.

The Graviton3E will boast twice the ability of its predecessor for accomplishing certain tasks, while being 20% more capable when combined with other AWS technology.

Amazon beat on earnings and missed on revenue for the third quarter, reported a month ago now. Operating income decreased as operating cash flow swung to an outflow. Though AWS grew 27% over the year prior, in terms of revenue, the unit fell short of consensus. In the guidance provided Amazon told us that this quarter was going to underperform where Wall Street was at the time.

For the full year, the firm told us that capital investment would still grow as transportation and fulfillment were cut back on and AWS-related spending ramped up. Well, here you are.

I have been trading Amazon as I often do. I am long the name right now (+5% too) as I was on that post-earnings report that I wrote up for you, without ever having a medium to long-term bullish feel for the stock.

Heck, they literally warned us not to expect much this quarter. The firm expects to see operating income between $0 and $4B. You may recall that Wall Street was looking for $3.5B at the time. That said, the stock, after selling off a month ago, has hung in there. Then again, it's easier to hang in there when the rest of the market catches a bid. 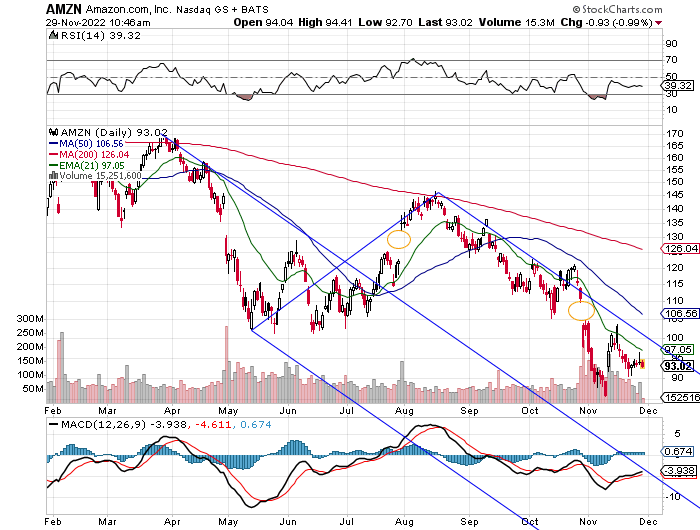 Readers will see that the shares continue to find resistance at the 21 day EMA/upper trendline of our Pitchfork model. The gap between $104 and $109 remains unfilled. I probably should have sold these at $96 on Monday, but I got a little greedy.

For short-term traders as I am in AMZN, I think I need to make a sale on another approach of that 21 day line. I think I need to reduce risk should the shares make a low below the $90 low made in mid to late November. Either way, I'll be done with the name long before the late January earnings release.

For longer-term investors, you are going to need to see the 21 day EMA as a pivot, and then hope to fill the already mentioned gap on the way to the 50 day SMA. I could change my mind, but I am just not very high on AMZN, at least for now.

Get an email alert each time I write an article for Real Money. Click the "+Follow" next to my byline to this article.
TAGS: Investing | Markets | Stocks | Technical Analysis | Trading | Retail | E-Commerce