For his final "Executive Decision" segment, Jim Cramer checked in with Michael Weiss, executive chairman and CEO of TG Therapeutics (TGTX) , the biotech that just presented at the annual JP Morgan Healthcare Conference.

Weiss said TG is about to have their first watershed moment with a drug approval slated for Feb. 15. After that, his company expects another approval coming in June and potentially their leukemia drug being approved before the end of the year.

When asked about competition, particularly in the multiple sclerosis arena, Weiss explained that while the total market for MS is $25 billion, the subset they focus on represents only $10 billion. In that subset, there are only two competitors, and it's important for patients to have new treatment options.

Turning to the topic of capital, Weiss said that TG has been very fortunate to have access to the capital markets. He said TG does not need additional financing to achieve their goals or execute their plan.

Let's check out the charts of TGTX.

In this daily bar chart of TGTX, below, we can see that prices made a low back in March when the broad market averages bottomed. Prices traded higher in a nice upward sloping channel before exploding higher in early December. Prices have been consolidating those steep gains with sideways trading in the $50-$55 area. TGTX is trading above the rising 50-day moving average line and trades at twice the level of the rising 200-day moving average line.

The On-Balance-Volume (OBV) line shows strength from March which confirms the price gains but the OBV line has leveled off with the sideways price action since the middle of December. A flat OBV line suggests that buyers and sellers are in balance.

The Moving Average Convergence Divergence (MACD) oscillator has stayed above the zero line since late April but is currently in a take profit sell mode.

In this weekly bar chart of TGTX, below, we can see that TGTX is a ten-bagger from the base pattern hammered out around $5. Farsighted investors had plenty of time and opportunity to buy at $5 in 2019.

Prices are trading above the rising 40-week moving average line but they are more than twice the level of the average so TGTX should be considered "extended" or "overbought". A correction in the weeks ahead is more likely than further gains.

The OBV line is bullish and so is the MACD oscillator. 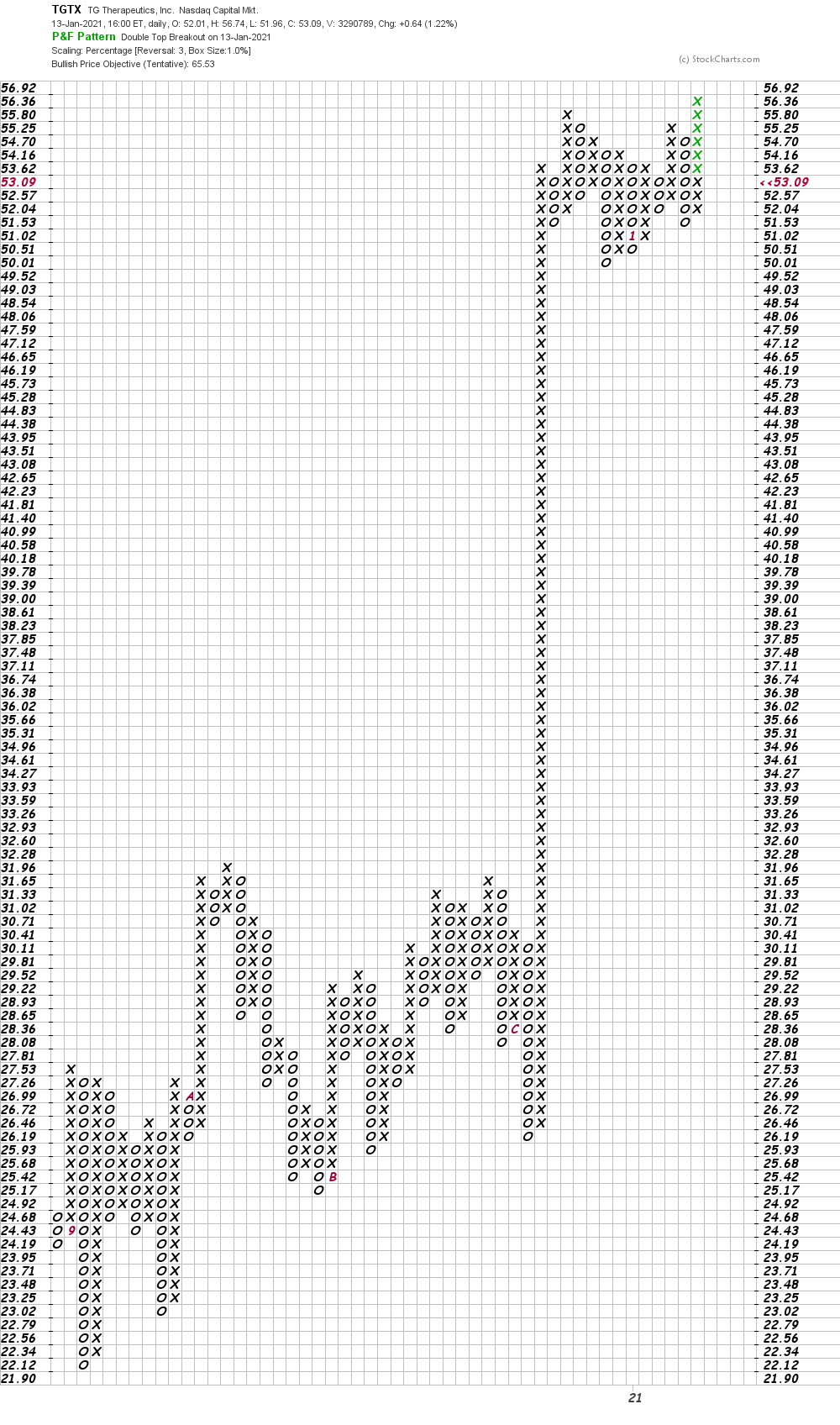 Bottom line strategy: What a December. TGTX doubled in price in just one month, so a good period of consolidation is the likely course of events now. Let this correction play out and hopefully attract new and aggressive buyers. Let's see what happens on February 15th.

Get an email alert each time I write an article for Real Money. Click the "+Follow" next to my byline to this article.
TAGS: Drug Approvals | Investing | Stocks | Technical Analysis | Trading | Biotechnology | Pharmaceuticals | Mad Money | Executive Interview