For the three month period ended October 31st, Palo Alto Networks posted an adjusted EPS of $0.83 (GAAP EPS: $0.06) on revenue of $1.563B. Both the adjusted EPS and revenue prints did beat Wall Street as that revenue number itself was good enough for year over year growth of 24.8%. The firm adjusted for $0.87 (per share) worth of share based compensation, which was by itself, larger than the entire adjustment in aggregate.

Digging in a little, billings grew 27% to $1.75B, while RPO (remaining performance obligation) grew 38% to $8.3B. Current RPO (cRPO) represents about half of the firm's RPO. This is consistent with past quarters. Long-time readers can skip the rest of this paragraph. For the new kids, welcome. RPO is the sum of a company's deferred revenue and backlog. cPRO is the portion of RPO that the company is obligated to deliver within 12 months.

As reported (unadjusted), operating expenses increased 14.5% to $1.086B, as operating income improved to $15.2M from $-82.7M. After adding in other unspecified income and subtracting provisions for income taxes, the firm was left with a net income of $20M, which was up from $-103.6M for the year ago comp. For those thinking that these numbers seem a bit paltry, remember that $0.87 per share adjustment for share based compensation. That's worth $278.9M in total.

Palo Alto ended the quarter with a net cash position of $3.804B and current assets of $5.734B. Current liabilities will surprise readers at $8.195B to include $3.679B worth of convertible senior notes not considered long-term. This puts the firm's current ratio at 0.70, That makes some folks, including myself, uncomfortable. This is when you have to remember that RPO of $8.3B, of which almost half is current.

A little Accounting 101 here. The firm has $3.741B in deferred revenue on the balance sheet. This is prepayment for services to be performed in the future and is entered onto the balance sheet as a short-term liability. That revenue can not be recognized as such until the work is performed. As the work is done, these funds are reduced from that entry and entered onto the statement of operations as revenue. So, these funds represent work owed, not capital owed. Hence, sans deferred revenue, Palo Alto's current ratio would be a very healthy 1.53.

This balance sheet is fine. The net cash position is nearly enough to cover those short-term notes. I would like to see perhaps a portion of that debt-load paid down and maybe the rest pushed out in maturity.

I must say... this is getting more and more difficult. I like to restrict this section to those sell-side analysts rated at four or five stars by TipRanks in order to maintain a high standard. That said, many big name analysts that are often interviewed in the financial media have lost their four or five star rating. I really can not assume anyone is highly rated anymore.

Since these earnings were released, I have found nine sell-side analysts rated at four or five stars by TipRanks who have also opined on PANW. All nine rate the stock as a "buy" or buy-equivalent. One of the nine declined the opportunity to set a target price. The average target price across the other eight is $221.13 with a high of $240 (Gray Powell of BTIG) and a low of $207 (Shaul Eyal of Cowen & Co). Once omitting the high and the low as outliers, the average of the other six drops to $220.33.

I did come into these earnings long Palo Alto, so with the stock up about 9% this morning, I am not going to complain. I had been out of cybersecurity for some time when I started working my way into PANW in late September. It was a leap for me to admit that PANW is best in class because I had always been in and out of Zscaler (ZS) as my proxy for the space in the past. CrowdStrike (CRWD) has often been my secondary name in the space. Both of those names were up 2% to 3% this morning as part of PANW's pin action. They both will also report in about two weeks.

As for Palo Alto, the only thing I don't love is all of the stock based compensation. Away from that, the growth is here, in revenue, billings and in remaining performance obligation. The balance sheet is strong with the potential to be very strong. I think going forward, that this remains my primary name in cybersecurity. 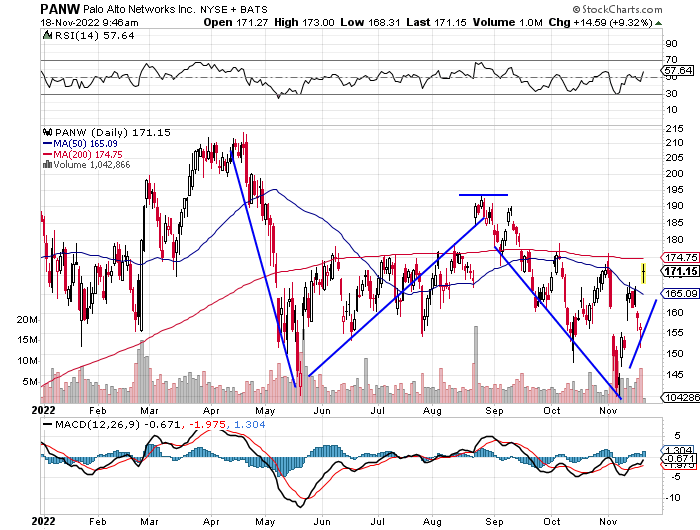 It has taken months. That said, PANW has put together a "stretched out" double bottom reversal. This pattern puts the pivot at $193. First things first... the stock has now taken its 50 day SMA and needs to take the 200 day SMA as well to get there.