I lied to you. Well, not intentionally. In This morning's Market Recon, I mentioned that Ford Motor (F) had pierced my $17 target price and that I was honor bound to make some kind of sale and then refigure for you and I, a new target. Shortly after publication, I realized that I had increased my target price for Ford Motor to $19 from $17 in a piece for Real Money on September 28th, when the last sale was $14.65.

That was the day after Ford had announced a collaboration with South Korea's SK Innovation to invest a combined $11.4 billion - Ford's portion is $7 billion - in three plants (two in Kentucky, one in Tennessee) to build electric trucks and batteries. Well, nobody ever got fired for taking a profit. It was a small sale. I'm still long plenty. That said, we move on.

Sarge fave Ford Motor reported the firm's third quarter financial performance on Wednesday evening. The numbers are impressive. Ford posted adjusted EPS of $0.51, and GAAP EPS of $0.45. By either metric, the firm easily beat Wall Street. Automotive Revenue over the three months landed at $33.2 billion, down 4.3% year over year, but better than expected. Right off the top of the firm's press release... Ford generated $1.8 billion in net income, adjusted EBIT of $3 billion, and North American auto EBIT margin of 10.2%.

The firm also raised guidance for full year adjusted EBIT to $10.5 billion to $11.5 billion, up from $9 billion to $10 billion. Wall Street was down around $9.5 billion to $9.6 billion on this metric, so the very low end of Ford's range. Never mind the mid-point is well above consensus view. The firm states that it expects cash flow over the current planning period to be more than sufficient to fund growth (EV) priorities, and backed that up by declaring a $0.10 quarterly dividend (forward yield: 2.58%) for shareholders of record on November 19th.

One interesting takeaway from last night was the fact that Ford attributed the strong performance to an easing of the semiconductor shortage, while also stressing that these shortages will still be with us for quite some time. Ford now has the largest inventory in this industry, and due to strong demand has been able to boost the firm's average sale price 13% to $51,460.

On the transition toward electric vehicles, CEO Jim Farley did mention that Ford has annual demand for 200K Mustang Mach-E vehicles. Ford is starting to manufacture the Mustang Mach-E in China in addition to the already productive facility in Mexico. The firm expects to have factory capacity to build more than a million battery electric vehicles per annum by the mid-2020's.

This is interesting. Cash and equivalents are higher. However, when one includes short-term investments, the net effective cash balance is actually down a bit. Current assets are actually considerably lower over the past year due to a much smaller entry for Ford Credit receivables. The number still dwarfs current liabilities, which have also been downsized. In fact, total assets still easily outweigh total liabilities less equity. Both of those numbers have decreased over 12 months with the liability side shirking faster. There has, and this is key... been a significant reduction made to long-term debt. We like to see that. This balance sheet is not only healthier than it was, it's becoming healthy. 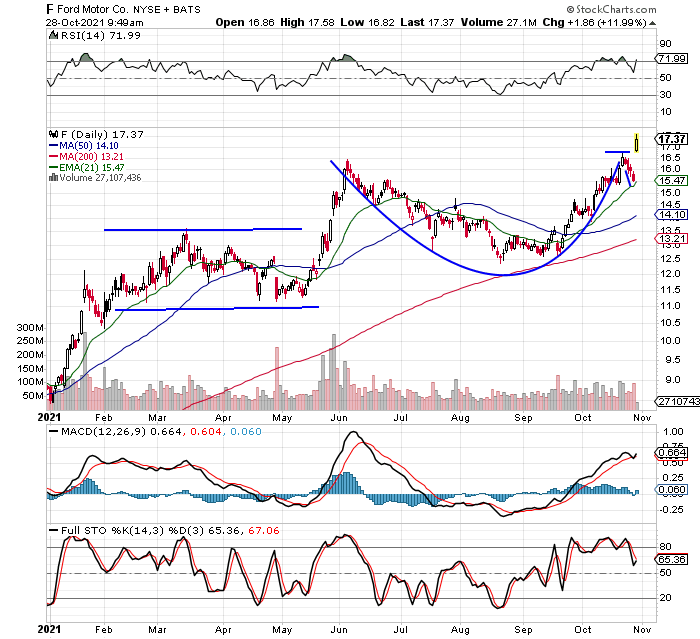 Readers will see that Ford shares developed a small handle over the past week to go nicely with the cup that had formed over the summer. This has created a new pivot of $16.50, and the breakout that is currently underway. I would expect that over the coming days there will be an attempt to fill last night's gap, so the breakout will probably be tested, but this is and has been a clearly bullish chart.

Readers will also see that Relative Strength has moved back toward a technically overbought reading after spending most of October in such a state. The daily MACD is nodding its head in agreement, but the Full Stochastics Oscillator says, "Hold on, I think there's still some room to ride here."

My feelings? The way this stock trades, those flat or underexposed will get their chance to add probably at a cheaper price than one will get Thursday morning. I have been on the Ford bandwagon since the shares were trading in the $7's in 2020. Yes, I am sitting on more than a double. I honestly believe that there is at least another double in this name over the next 12 to 18 months. Tesla (TSLA) is the industry leader at this point.

Legacy automobile manufacturers will have to strengthen their niches in order to gain EV market share through this broad transition. Ford Motor is perhaps the very best in the business at satisfying demand for those niches. Tesla has taken sedans away from the rest of the industry. My educated guess is that Tesla will not dominate pick-up trucks, SUVs, commercial vehicles, or muscle cars. You're not wrong, btw, if you are in General Motors (GM) . All boats are going to rise.

Action Alerts PLUS is long F.

Get an email alert each time I write an article for Real Money. Click the "+Follow" next to my byline to this article.
TAGS: Earnings | Investing | Markets | Stocks | Technical Analysis | Trading | Automotive | Technology | Electric Vehicles