On Tuesday morning, defense and aerospace giant Lockheed Martin (LMT) , which is a long-time Sarge name though I had recently reduced exposure, released the firm's fourth quarter financial results.

For the three month period ended December 31st, Lockheed Martin posted adjusted EPS of $7.79 (GAAP EPS: $7.40) on revenue of $18.991B. The revenue print was good enough for year over year growth of 7.1%, while the GAAP earnings per share number compares to $7.47 for the year ago comp. Adjustments of $0.39 were made primarily for severance and mark to market investment losses.

The 7.1% revenue growth was in fact, the fastest pace of growth for the firm since Q4 2020, and the initial reaction ahead of the bell seemed to be focused on just that prior to correcting. Throughout the quarter, Lockheed returned $5B of cash to shareholders in the form of dividends and share repurchases, while the firm's order backlog increased 11% to $150B.

Aeronautics generated revenue of $7.635B (+7.1%), producing an operating profit of $816M (-0.5%) for an operating margin of 10.7%. Net sales increased by about $275M for the F-35 program due to higher volume on production contracts that was partially offset by lower volume on sustainment contracts.

Rotary and Mission Systems generated revenue of $4.803B (+7.7%), producing an operating profit of $508M (+13,4%) for an operating margin of 10.6%. Decrease in revenue was primarily attributable to an increase of roughly $260M in net sales for integrated warfare systems and in orders for S=CH-53 Sikorsky helicopters. This was partially offset by lower production volume for Black Hawk helicopters.

Missiles and Fire Control generated revenue of $3.287B (+2.1%), producing an operating profit of $451M (+3%) for an operating margin of 13.7%. Revenue growth was largely attributable to $115M worth of sales for tactical and strike missile programs that were offset by a decrease in missile defense program spending.

Space generated revenue of $3.266B (+11.7%), producing an operating profit of $231M (-25%) for an operating margin of 7.1%. Revenue increases were seen in increased spending on strategic and missile defense programs due to increased development volume for the Next Generation Interceptor. Commercial space programs have been a contributor here as well.

Government Helicopter programs: 24, down from the year ago comp of 37.

Commercial Helicopter programs: Zero, down from the year ago comp of one.

International Military Helicopter programs: 4, down from the year ago comp of 8.

For the quarter, Lockheed Martin generated operating cash flow of $1.928B, resulting in free cash flow of $1.235B. The firm ended the period with a net cash position of $2.547B, which was down more than $1B from a year earlier. Inventories printed in line with year ago levels at $3.088B. Current assets did, however, increase by more than $1B to $20.991B on growth of nearly $2B in contract assets. Current liabilities ended the quarter at $15.887B, leaving the firm with a current ratio of 1.32, which is healthy. Sans those inventories, the firm's quick ratio lands at 1.13, which is also healthy.

Total assets add up to $52.88B, including $13.239B in "goodwill" and other intangible assets. At 25% of total assets, I don't love that, but it is not a problem. Total liabilities less equity comes to $43.614B. This includes long-term debt of $15.429B, which is up significantly over a year's time, and in my opinion, a bit out of proportion relative to cash levels given there are no other liquid assets. This is still a solid balance sheet. I would just prefer to see that ratio worked on more than I want the beefy dividend.

I love this stock. I do not necessarily love where they are right now. This is why I wrote to you that after January 4th, I would be reducing exposure. Yes, there is still a war in Eastern Europe. Yes, US stockpiles will have to be rebuilt to maintain a higher level of preparedness just in case a war of their own ends up knocking on the door.

However, even though I understand that, Congress does not. There will be a budget fight in DC, and as debt service commands a growing slice of that budget, there is near certainty that defense and discretionary spending will have to be sacrificed somewhat. Just because I prioritize national defense does not mean that Congress will until they have to. Your average politician probably does not understand the necessity in taking the lead in hypersonic defense that they would should something terrible happen.

I will not exit LMT or the defense stocks as a group. That said, I do adjust exposure and as of early January, that was the case. 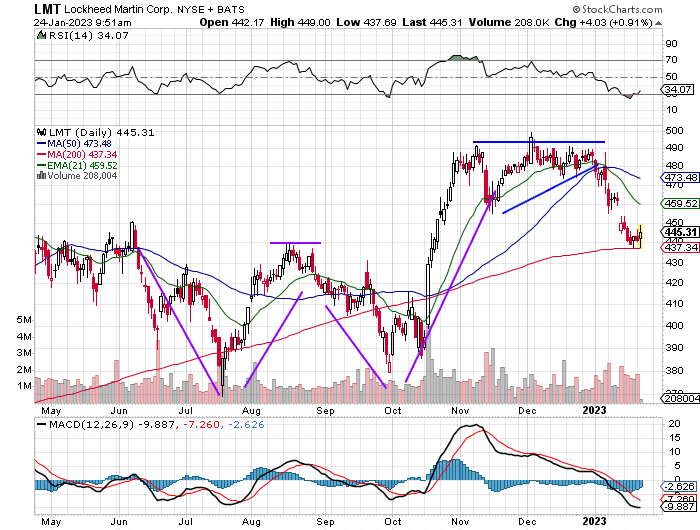 Readers will see that LMT broke out of a double bottom reversal with a $445 pivot in October. At that point the shares consolidated into late December and then broke down. Is it time to start buying back shares sold in LMT? If that 200 day SMA (simple moving average) holds, then it very well may be. If it does not, then Wall Street will move to reduce professional exposure at least for the time being.

(Lockheed Martin is a holding in the Action Alerts PLUS member club. Want to be alerted before AAP buys or sells LMT? Learn more now.)

Get an email alert each time I write an article for Real Money. Click the "+Follow" next to my byline to this article.
TAGS: Earnings | Investing | Markets | Stocks | Technical Analysis | Trading | Defense