There's gold in them thar hills. Maybe some copper too.

Barrick Gold (GOLD) reported the firm's first quarter financial performance on Wednesday morning. The firm posted adjusted EPS of $0.29, earnings growth of 81%, beating Wall Street by two cents. GAAP EPS hit the tape at $0.30, the adjustment was a reduction. We respect that. Revenue generation of $2.96 billion was good enough for 8.8% year over year growth, but slightly missed estimates. The increased revenue was pushed along by increased prices for gold (at least on average, year over year) and copper.

Operating cash flow hit the tape at $1.3 billion, producing free cash flow of $800 million. The balance sheet is in good shape. Cash and cash equivalents increased by almost $500 million to $5.672 billion despite having made an advanced tax payment to the state of Nevada. In fact, that cash and cash equivalents entry is indeed larger than the firm's long term debt balance of $5.14 billion.

Barrick Gold expects that second half 2021 production will exceed H1 production due to mine sequencing at Nevada Gold Mines, the commissioning of the new leach pad facility at Veladero in Argentina, the ramp-up of underground mining at Bulyanhulu, and lastly... higher anticipated grades at Lumwana in Zambia.

For Joy, For Joy

Barrick Gold declared a quarterly dividend of $0.09 (yielding 1.64%), which is in line with previous quarterly declarations. This quarterly check will be payable on June 15th to shareholders of record on May 28th. But wait... there's more. In addition, the firm also announced the first of three (worth $250 million per) tranches of a planned capital distribution.

This first tranche, good for $0.14 per share, will also be paid on June 15th to shareholders of record on May 28th. This distribution originates from a portion of the proceeds from the divestiture of Kalgoorlie Consolidated Gold Mines back in November of 2019, as well as from other recent dispositions made by the company. 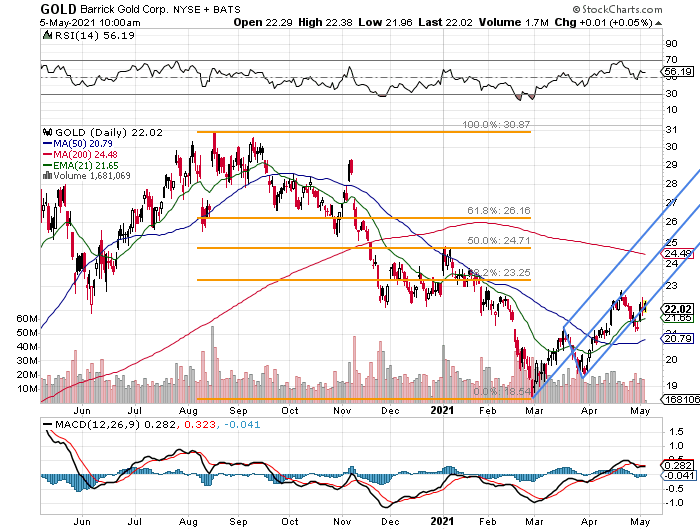 After making nothing but lower lows from August through late February, readers will see that GOLD has made only higher lows ever since. Basically, I see this last leg as coming off of the shares hitting resistance at a 38.2% Fibonacci retracement of the seven month long selloff. The recent upswing just barely kept the shares inside the lower chamber of a still developing Pitchfork model. The recent crossover of the 50 day SMA by the 21 day EMA is a positive. There is no reason to think that the shares can not overcome that first level resistance on a second attempt. The spot had been consistent support over the months of November and December, there is something there and the algos do see that.

Beyond that, this is a U.S. dollar/commodity story that will evolve around inflation as produce level demand remains elevated at least for copper as the economy continues to reopen and as the Biden administration tries to expand spending on infrastructure. I think the shares can be owned with a modest target of the 200 day SMA, or a more aggressive target of $28, based on a 20% to 25% move off of the $23 pivot. Don't forget, you are entering into a period of regular quarterly dividends "plus" for Barrick. The second and third tranches of that $500 million in remaining distribution is likely set for August and November of this year. I think I may grab a few of these shares for myself.

Get an email alert each time I write an article for Real Money. Click the "+Follow" next to my byline to this article.
TAGS: Dividends | Earnings | Gold | Investing | Markets | Stocks | Technical Analysis | Trading | Metals & Mining