Back with a vengeance...that's what the man said. Intel (INTC) (CEO) Pat Gelsinger, returned to Intel (as chief executive) in January to "save" the firm after having spent almost his entire career at the firm. Kind of reminds me of Jim Harbaugh giving up the NFL life after having already been successful there to come home and "save" the University of Michigan football program. Let's hope for Intel's sake, Gelsinger has a more successful homecoming than has had Harbaugh to this point.

Before we begin, readers should know that I am long this name, but not very enthusiastically. I got in back in mid-December based on a technical double bottom pattern and nothing more. Then I got lucky, as the firm replaced former CEO Bob Swan, who was no match for Advanced Micro Devices' (AMD) Lisa Su, with Pat Gelsinger who probably still is not (I am a Su fan), but perhaps presents as less of a mismatch.

We had waited for Intel's "Unleashed" event for weeks now. Basically, as Gelsinger, who is clearly a well-polished showman if nothing else, laid out a multi-pronged future for Intel to make its comeback, or to be plainly realistic... just reestablish credibility with clients, shareholders and consumers.

First, there will be a $20 billion investment in two fabs (chip fabrication facilities) at existing properties in Arizona. Planning and construction will begin this year. Product will hopefully move by 2024. Intel currently manufactures the majority of Intel products with some reliance upon global foundry behemoth Taiwan Semiconductor (TSM) . Intel will continue to lean on TSM while planning to eventually compete with TSM and Samsung as a third major foundry. Not sure how that plays out. I like the idea of becoming a major provider. Intel has tried this before, but not in this environment, and not under this management. I am willing to believe, somewhat cautiously, that this could work.

There is actually progress being made on the now quite embarrassing delay of the firm's 7nm "Meteor Lake" tile. The firm is leaning on semiconductor equipment provider ASML Holding (ASML) due to that firm's expertise in EUV lithography. This news has all of the other major equipment providers such as Lam Research (LRCX) , Applied Materials (AMAT) , and KLA Inc (KLAC) leading equity markets higher on Wednesday morning.

As Bank of America pointed out this morning, Intel is the only major semiconductor operation that had guided sales, gross margin and free cash flow lower for CY 2021. That makes it important that Intel now expects to exceed previously provided Q1 EPS guidance of $1.10 and previously provided Q1 revenue guidance of $17.5 billion. The FY guidance stands at $4.55 on $72 billion, both below consensus view. Obviously, investors are going to have to watch that $19 billion to $20 billion projection for capex. 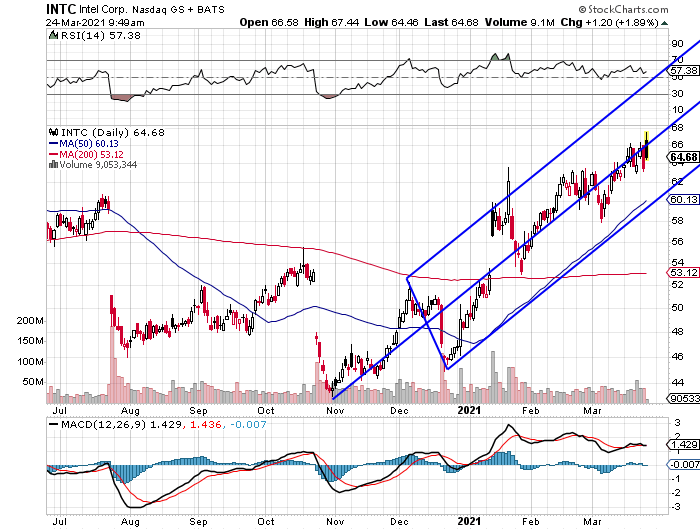 All gaps are filled. The stock emits neutral readings for Relative Strength, and a rather string looking, but non-committal (from here) daily MACD. We do have a working Pitchfork model that not only has the last sale basically straddling the central trend line for literally all of 2021, but also a lower trend line that seems to be running almost precisely in line with the stock's 50 day SMA. Technically, that level, currently around $60 should provide some significant support.

I am thinking I will probably add to this name. I would rather buy on weakness than on today's strength. Intel is expected to report quarterly earnings after the closing bell on April 22nd. April 23 $60 puts are still paying about $1.25. I think I probably make that sale (write those puts), and I think I probably will do that today, after this piece hits publication.