Wednesday afternoon. The bell rang. I had only been to the gym once since Saturday. I am not normal about exercise. Exercise is both physical and spiritual nourishment. A fork in the road? Netflix (NFLX) earnings. I knew that I wanted to trade this stock after hours. I also knew that I would have a very crowded calendar over the next few days. Spin class would begin at 4:15. I could make it. Have you ever tried trading during spin class? I have now. A real time saver.

First off, I really can not remember the last time that I was long Netflix. I have been short this name on at least four different occasions in just 2019 alone. This is the only name that I short on a regular basis since an unwelcome education in the kind of demand that a cult following can bring to a name had changed the way that I approach Tesla (TSLA) . That said, unlike with Tesla where those shorts had suffered loses versus wins by a two to one ratio, my shorts have regularly been profitable in Netflix. Let's move on. I came into Wednesday afternoon flat the name after chickening out (thank goodness) on my previous short one week earlier, settling for far less profit than could have been.

I promised myself that I would not check until 4:30. As I wiped the sweat away from my smart phone screen with my not yet too sweaty bandana, I could hardly believe my eyes. Netflix had just reported, and the stock was flying. Soaring. The firm reported solid profit. EPS of $1.47 beat expectations by a country mile. Revenue of $5.25 billion was in line with those expectations, but still printed at robust annual growth of 31.3%.

Subscription growth, still massive, especially globally, disappointed by a small margin overall. Second quarterly miss in a row. That includes a beat internationally that not quite offset a substantial miss domestically. Operating income more than doubled, while operating margin increased significantly year over year. After-hours traders obviously liked what they saw. The highest price that I saw last night ran with a possibly short-squeeze aided 312 handle, up a rough 9% from Wednesday's closing price of $286.28.

The firm is now guiding the fourth quarter toward toward EPS of $0.51 on revenue of $5.44 billion. This measures less than well against Wall Street consensus of $0.81 on $5.52 billion. As far as subscription growth for Q4, Netflix now sees the addition of 7.6 million new accounts to include 600K in the U.S. That is lofty considering that these numbers would be well above what the firm just reported for Q3, which was the final quarter reported prior to the market entry of several high profile competitors that come with much better, and more diversified cash flows.

Netflix did not dismiss the competition on Wednesday night, as they have appeared to do in the past, though the firm does downplay (in my opinion) the impact that this competition might have on the overall business. The thought at Netflix seems to be that they have already been in competition with Amazon (AMZN) Prime, with the YouTube subsidiary of Alphabet (GOOGL) , and with Hulu, which is now controlled by Walt Disney (DIS) .

In the letter provided to investors by Netflix, the firm states "The upcoming arrival of services like Disney Plus, Apple (AAPL) TV Plus, HBO Max (AT&T: (T) ), and Peacock (Comcast: (CMCSA) ) is increased competition, but we are small compared to linear TV." While admitting that the launch of these services will be "noisy" and should create "headwind", the letter adds "... the launch of these new services will be to accelerate the shift from linear TV to on demand consumption of entertainment." Even as someone who shorts this stock, and is not in love with the firm's dependence upon debt fueled expenditure, that line does make some sense. That said, Netflix indicates that this increase in competition is indeed factored into the forward guidance. That, I do have trouble wrapping my head around.

Apple TV Plus will launch on November 1st. The app is already present on all of Apple's consumer gadgets as well as on Roku (ROKU) , This service will run the consumer just $4.99 per month, or free for a year with the purchase of one of these mobile devices. Disney Plus will launch later in November. That service will charge it's customers $6.99 per month, or if bundled with both Hulu and ESPN Plus, something roughly similar to the $15.99 that Netflix currently charges at the high end of it's price range. Two cash flow giants with diversified businesses that will easily be able to subsidize losses realized in the streaming business for years if necessary in way that Netflix can not. One, with significant control over where and how their platform is delivered to the public. The other, the undisputed king of content. This may not be pretty. The HBO Max and Peacock enter the fray in early 2020. Think I'm biased? I might be. I do have broad exposure to the space. See the disclaimer below. 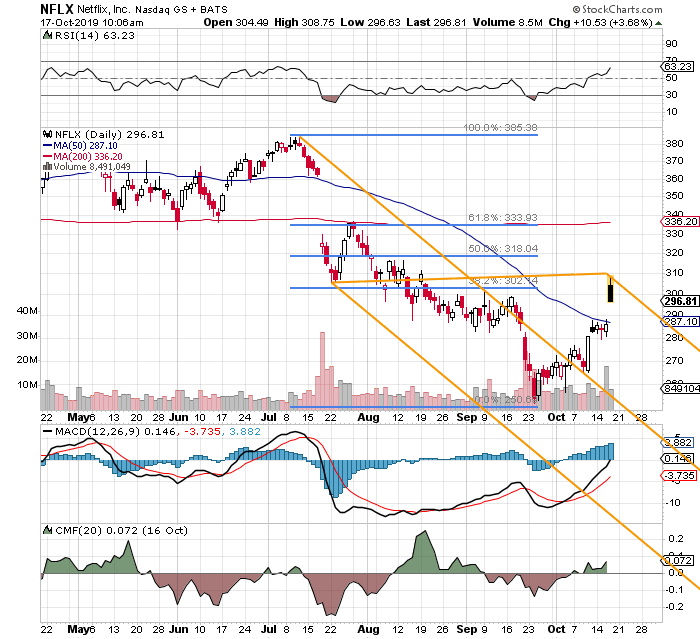 Okay, you already know that I am short this name. My average price from Wednesday evening is $309.28. I see the 50% retracement level of the July through September selloff of $318 as my panic point. I believe that into November there is potential for a return for these shares to the central trend line of this Pitchfork model, which is currently around $265.

For those long this name there is hope. While my Netflix shorts do normally return a profit, my target prices have been regularly too aggressive. Not sure what exactly that is worth.

Get an email alert each time I write an article for Real Money. Click the "+Follow" next to my byline to this article.
TAGS: Earnings | Investing | Options | Stocks | Technical Analysis | Trading | Movies | Stock of the Day