Is it time to re-enter Apple (AAPL) ? Good question. Apple's shares closed at $244.78 on Thursday, down less than 1% on the day, down more than 25% from the stock's 2020 highs, just a few bucks above this week's lows. Apple's problems so far this year have been largely due to the fact that the firm's supply lines run deep into Asia as well as into China. While this outsourcing of supply chains has now been revealed as a national weakness that will have to be addressed once the nation reaches the other side of what we are only beginning to go through, this Asian production could be a short to medium terms strength for Apple. They will at some point have product... if consumers are then in a position to purchase.

Apple has tried to evolve more into a services provider, that for the firm provides recurring revenue, and less a purveyor of hardware or consumer electronics. Last week, Apple announced that the firm would close all of its retail locations outside of what the firm calls "Greater China." The closures were intended to last through March 27th. With three days, that end date had been changed to "until further notice." Earlier this week, France's competition agency hit Apple with a fine of $1.2 billion, claiming that the firm had conspired with distributors of its own products to fix pricing to limit competition. One might think right now that these issues while problematic are not the biggest fish the firm has to fry right now. As an aside, Apple has disagreed with the decision made in France and plans to appeal.

Apple's next batch of iPhones, the 5G capable smart phones, are set to launch this autumn. That has not yet been pushed back as the bulk of production was set to kick off this May. Much of Apple's factory work in China is done by Foxconn. Foxconn is optimistically looking to return to normal operations by the end of this month. That said, even if this "restart" goes smoothly, which is suspect, there has already been a severe lack of production that lasted through February in close to its entirety. This directly impacts availability of current iPhone models and AirPods.

As for other key parts of Apple's supply chain, factories in Malaysia have been closed, which directly impacts a number of Apple suppliers that provide semiconductors and circuit boards to Apple products. Taken from an article at Bloomberg, Jabil (JBL) , a firm that makes iPhone casings stated that its factories in China were getting close to normal, but elsewhere many plants are running as much as 10% below capacity.

This week, Wedbush analyst Daniel Ives reduced his target price to $335 from $400, while maintaining his "Outperform" rating on the stock. Ives cut his revenue estimate for iPhone revenue by 14% for 2020 and by 10% for 2021. Ives used the term "dark days ahead" to describe the firm's immediate future as would be consumers worry about health related issues. Ives expects the negative human impacts of the Covid-19 infection to in turn severely impact the firm's business model for two years. 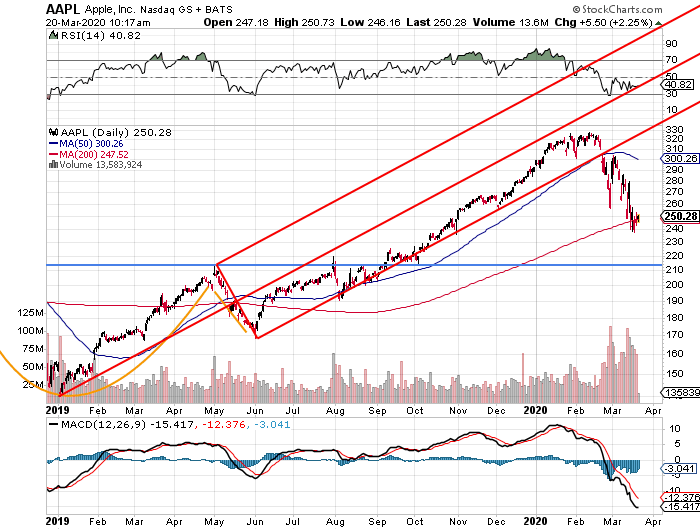 My thought is that there will be an algorithmic response to the outcome of the current battle that appears to have developed for this name at the 200 day SMA of 247-ish. Therefore, I am not re-entering this name until I see the outcome of that battle. Either I end up chasing this stock up to $265, or I wait for a re-test of mid-2019 resistance in the $215 area.

Get an email alert each time I write an article for Real Money. Click the "+Follow" next to my byline to this article.
TAGS: Investing | Markets | Stocks | Technical Analysis | Trading | Software & Services | Technology Hardware & Equipment | Asia | China | Coronavirus

We Don't Have a Magic Bullet for the Market, but We Have This

We have a point when we know the runway is short unless we get a pullback. Let me explain.