Home improvement giant Home Depot (HD) posted the firm's third quarter financial performance on Tuesday morning. The firm put a GAAP EPS print of $3.92 to the tape, simply crushing estimates across Wall Street. The firm generated $36.82B in revenue over the three month period, up 9.8% year over year, and also beating Wall Street by a more than comfortable margin. The $3.92 per share adds up to net earnings of $4.1B, up 23.3% over the comparable year ago period. Operating income increased 19.4% to $5.795B. Cost of sales as a percentage of sales printed at 65.9%, which is close to unchanged from a year ago.

Interestingly, comparable sales popped an incredible 6.16% year over year vs. consensus view of 2.2%, while U.S. comp sales increased 5.5% versus a miniscule consensus for growth of 0.9%. Twelve of 14 departments posted positive comparisons. In a disparity probably exacerbated by inflation, the average ticket price increased 12.9% to $82.38, while the total number of transactions contracted 5.5% to 428.2M. The stock was trading more than 4% higher this morning. Chief competitor Lowe's (LOW) is up in sympathy as Lowe's is set to report tomorrow (Wednesday) morning.

Wall Street seemed to see the stronger than officially expected quarter coming. Just in the past week, I saw five five star (at TipRanks) analysts that opined ahead of earnings. Both Zachary Fadem of Wells Fargo and Matthew McClintock of Raymond James maintained their respective firm's equivalents of "buy" ratings while increasing their target prices to an even $400.  Christopher Horvers of JP Morgan and Joe Feldman of Telsey Advisory also both maintained their "buy equivalent" ratings, while increasing their target prices to $397 and $390, respectively. The one of the five not so hot on Home Depot, was Peter Keith of Piper Sandler, who maintained a "hold equivalent" rating while increasing his target price from $320 to $323. Not a misprint. Yes, the stock closed at $371.08 on Monday night.

Cash and cash equivalents are now running almost $3B below where that entry was at the start of the year. Yet, current assets are a rough $2B higher. This is primarily due to a $4B inventory build. Current assets outweigh current liabilities, while total assets outweigh total liabilities, but not in lopsided fashion. Long-term debt has grown slightly over the past nine months, and remains a little high for my liking, but I am a strict taskmaster. The firm can meet its obligations and still runs with a current ratio greater than one. This is not my favorite balance sheet, but I can not call this firm unhealthy. 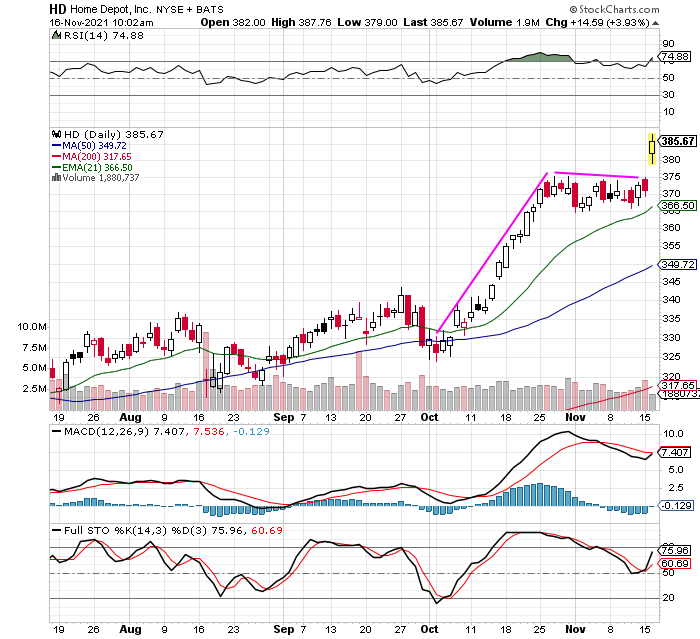 This morning, we see a bullish breakout from a textbook "flag formation" which is a pattern of continuance in an uptrend. Readers will, in retrospect, see the flag pole which was built from the start of October through the three weeks that followed. From late October through this past Monday, the stock built a slightly downward sloping flag that set up this morning's events.

The good news if you missed it like me (I missed it because I took profits a bit too early, I usually am long Home Depot) is that this morning's burst has left an unfilled gap between $371 and $379. Not today, but at some point I would think that there is an eventual attempt to fill that gap. Right now, the stock runs, and all three of the above indicators are either screaming "overbought" or getting close to it.

Home Depot had a really strong quarter and the star of the quarter was same-store sales. While the next year may or may not be tough for retailers, one thing we do know is that housing markets have been intensely hot all year, really for almost two years. Whether or not one buys a new home or an existing home, new home owners end up running back and forth to either Home Depot or Lowes constantly.

Get an email alert each time I write an article for Real Money. Click the "+Follow" next to my byline to this article.
TAGS: Earnings | Investing | Stocks | Technical Analysis | Trading | Consumer Services | Household Products | Consumer Products