I mentioned this morning in Market Recon that though I have been raising cash, I have not sold any Microsoft (MSFT) due to both their now cozy relationship with the U.S. Army as well as the stock's technical set-up. There is another group of stocks that I haven't touched. The semiconductor and semiconductor adjacent names that were on my book. Now, as I discussed in a broad way this morning, just what is inside of President Biden's spending plan, I mentioned $480 billion in manufacturing subsidies and R&D. Within that number, you might be interested to know that $50 billion earmarked specifically for the semis. I remain long Advanced Micro Devices (AMD) , Intel (INTC) , KLA Corp (KLAC) , Micron (MU) , and Nvidia (NVDA) . How apropos that as the president spoke, Micron was releasing fiscal second quarter financial results.

For the period reported, Micron posted adjusted EPS of $0.98, beating consensus by a few cents. Revenue generation increased a cool 30% year over year to $6.24 billion, also a beat. Operating cash flow poked up to $3.06 billion, up from $2 billion a year ago, and from $1.97 billion sequentially. DRAM, currently in short supply accounted for 71% of quarterly revenue, while NAND which is slower but does not need constant power to retain data saw revenue increase 9% y/y. Adjusted gross margin across the firm printed at 32.9%, toward the high end of the company's own 32% to 33% guidance and well above the 31.7% that Wall Street was looking for.

The balance sheet looks fine. No surprises. Total current assets are up roughly by about as much as is the net cash position. There is absolutely no change to goodwill, which we like to see. Current and total liabilities are down small both q/q and over the past six months largely due to decreasing accounts payable. Long-term debt has been shrinking, slightly.

For the firm's fiscal third quarter, Micron sees revenue of $7.1 billion, give or take $200 million, that will produce adjusted EPS of $1.62, give or take seven cents. Micron also expected gross margin to keep on improving, and ending the current quarter at 40.5% to 42.5%. The firm does not expect to be able to meet industry demand for either Dram or NAND memory through calendar year 2021. The firm does expect to meet industry forecasts for demand growth over a longer time frame.

There has been some confusion over the past two days regarding Japanese flash memory manufacturer Kioxia, a firm that was created as a stand alone business when Toshiba sold its majority stake to a number of firms including Apple (AAPL) . The Wall Street Journal had reported that both Micron and key competitor Western Digital (WDC) were potentially preparing separate bids for the Japanese business whose value has been estimated to be around $30 billion. However, Bloomberg News has also been reporting that Kioxia could be planning to go public via an IPO as early as this summer. 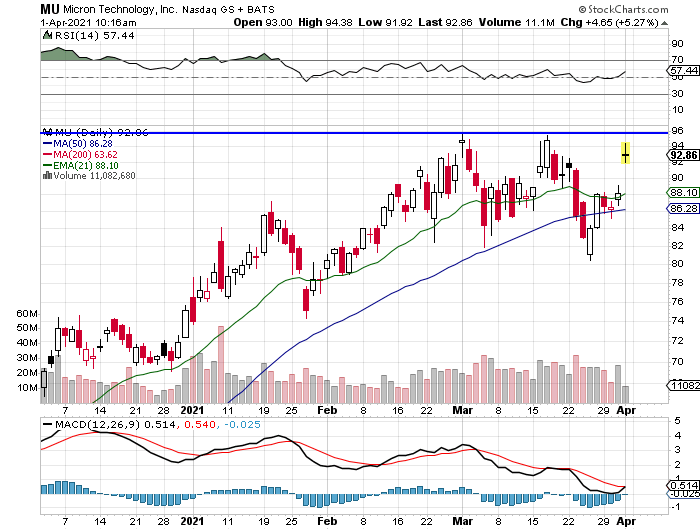 Suddenly with these positive results and optimistic outlook, Micron goes from a stock that had put in a double top to a stock that is knocking on a door for a third time that already failed to open twice. The door, by the way, stands at $95.75, so not there yet, and now of course there is a wide open gap. I hate those. I'll tell you what. I do not add here. I add on the gap being filled, at the 21 day EMA, or I add at $96 on momentum. In between, I sit on my hands.

If you are willing to go out three weeks, you can still get paid a rough $1.50 for April 23rd $88 puts. Not the worst idea that I've ever heard.

(MSFT, AMD, NVDA, and AAPL are holdings in Jim Cramer's Action Alerts PLUS member club. Want to be alerted before Jim Cramer buys or sells these stocks? Learn more now.)