That's a very dumb-downed version of CleanSpark (CLSK) . The company grabbed some headline space today when it announced it would acquire Bitcoin Miner ATL Data Center for $19.4 million in shares. On the surface, it does feel a bit like a reach, but I like what's underneath.

Let's talk about the reach first. The company paid $19.4 million and acquired 3,471 bitcoin mining units on the site. That works out to $5589 per unit, if we are focused on the miners only. These sell for about half that price. That being said, the wait list is long, so there's an opportunity cost of lost mined Bitcoins if you had to wait five or six months for delivery and installation. Given the company is targeting multiple Bitcoins per day at a cost potentially as low as $0.0285 per kw/h (this is dirt cheap!), they should come close to recouping the "overpayment" within those six months as long as Bitcoin stays above $13,000. This is an estimate since we don't know their total production cost yet, but I anticipate it has some room if BTC were to retrace. That's the underneath part. If BTC remains between $15,000 and $20,000, then the net move should be a net positive.

The company plans to take advantage of its software tech to expand total power capacity in the facility while reducing costs. If it can prove it is able to do that then CLSK can expand that offering to other data centers even if it doesn't own the data center or the machines within it. There could be big contracts to be had from other miners in a share of a cost-savings model.

After raising $40 million in October, the company has cash for growth and expansion. Revenue for 2020 landed at $10 million with at least $20 million projected in 2021. That number could significantly increase with this recent acquisition. If the company can mine two BTC per day at the current price, then revenue could be closer to $30 million rather than $20 million.

This trades around the market cap of Marathon Patent  (MARA) and a little more than half of Riot Blockchain (RIOT) . While those companies both have more machines and a higher hash rate, their cost to produce is projected no better than CleanSpark. MARA sits at $0.28 per kWh but also has another $0.006 in hosting costs. Additionally, they are one-trick ponies.

The other contracts coming for CleanSpark revolve around the EV market. This is now being done under a cloud-based subscription service rather than a one-time sale. That should help fuel longer-term consistency in revenue and growth. The company will have more visibility on revenue from this side of the business. In short, the company will touch IoT (Internet of Things), EV, and power utilities in addition to Bitcoin. While these seem like buzzwords or chasing hot sectors, they are actually closely related. These items all revolve around power management and clean energy.

As far as the technical setup, it has an appealing longer-term weekly chart. If bulls can keep this above $13 through tomorrow's close, we'll get a breakout in price on the weekly chart. Shares bounced off the 21-week simple moving average (SMA) for the better part of two months. We now see the 10-week SMA bouncing off that average. This should help to lift shares. Additionally, CLSK has a turn higher in the both the StochRSI and Full Stochastics, indicating support of the bullish move. Lastly, this W-shaped price pattern points to a price target of $16 to $18 over the next few weeks. 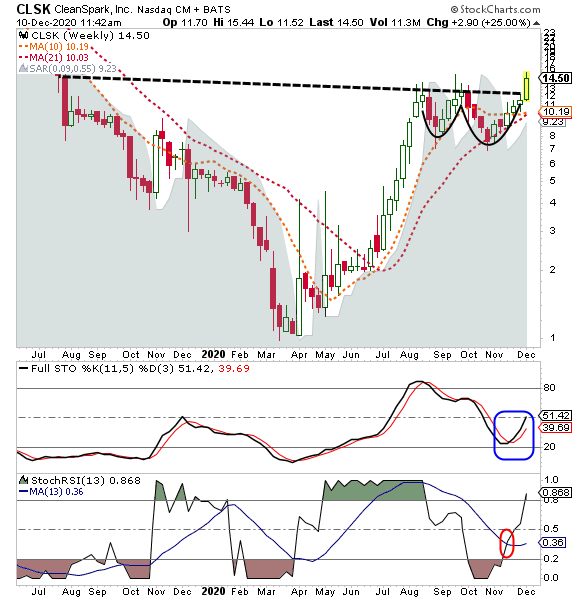 CLSK is a smaller company, so this should be considered an aggressive play, but I find the exposure to Bitcoin plus grid-management appealing. These should remain hot sectors for 2021, demanding premium valuations.

I'm a buyer of CLSK shares with the intention of holding all of it until the low $20s, then scaling back to half the original size and letting it play out.

Get an email alert each time I write an article for Real Money. Click the "+Follow" next to my byline to this article.
TAGS: Bitcoin | Investing | Stocks | Technical Analysis | Trading | Energy | Electric Vehicles