The turnaround has seemingly taken forever. Actually, the professional... Larry Culp was brought in to try to fix the company in October of 2018, after what seemed like a valiant attempt by an overwhelmed John Flannery who was the first to attempt to unwind 16 years of mismanagement, debt accumulation and reputational damage under former CEO Jeff Immelt. Little over a year later, the global pandemic hit nearly all sectors of the economy, certainly not sparing the industrials.

General Electric (GE) is that company and that company went to the tape with their second quarter financial results on Tuesday morning. The firm posted adjusted EPS of $0.05, which did beat expectations. Excluding non-operating benefit costs, restructuring and debt extinguishment costs, GAAP EPS landed at $-0.07. Revenue generation for the period landed at $18.3 billion. That number was also a beat, and good enough for annual growth of 8.9%. Industrial profit margin improved to -1.3%, +440 basis points. Adjusted Industrial profit margin hit +5.3%, up from -4.1% for Q2 2020. Total orders were up 33%, organic orders up 30%. Industrial free cash flow hit $388 million, up from $-2.067 billion for the year ago comparison.

1) Aviation contributed revenue of $4.84 billion to the whole, up 10% year over year, as demand for commercial engines and commercial services started to return. Segment margin improved from -15.7% a year ago to +3.6%.

2) Healthcare enjoyed 14% revenue growth to $4.454 billion. This growth was driven by demand for Imaging and Ultrasound, as well as Pharmaceutical Diagnostics. Segment margin increased from 13% to 18%.

3) Power experienced a 3% increase in revenue generation to $4.295 billion. Not reflected yet in dollar and cents, it should be noted that orders for Power products and services were up 67%, so one would think this could bode well moving forward. Segment margin improved from -1.2% to +7%.

4) Renewable Energy posted revenue of $4.049 billion, up a cool 16%. The improved demand here seemed to come more from Offshore Wind than from anything else. Segment margin remained negative, but did improve from -7.2% to -2.4%.

European Union antitrust regulators have approved without conditions Aercap's (AER) $30 billion bid for GE's aircraft leasing business. The European Commission sees no concerns regarding negative impacts against competition. The deal will permit GE to carve $30 billion worth of debt off of the firm's balance sheet.

For the full year 2021, GE increased the firm's expectation for Industrial Free Cash Flow from a range spanning $2.5 billion to $4.5 billion, up to a range spanning $3.5 billion to $5 billion. The firm also reiterated expectations for full year adjusted EPS of $0.15 to $0.25. Though this is a reiteration, Wall Street is up around $0.26 on this metric. The firm also expects to see adjusted industrial Profit Margin expand by 250+ basis points and industrial revenue to grow organically in the low single digits, percentage-wise. 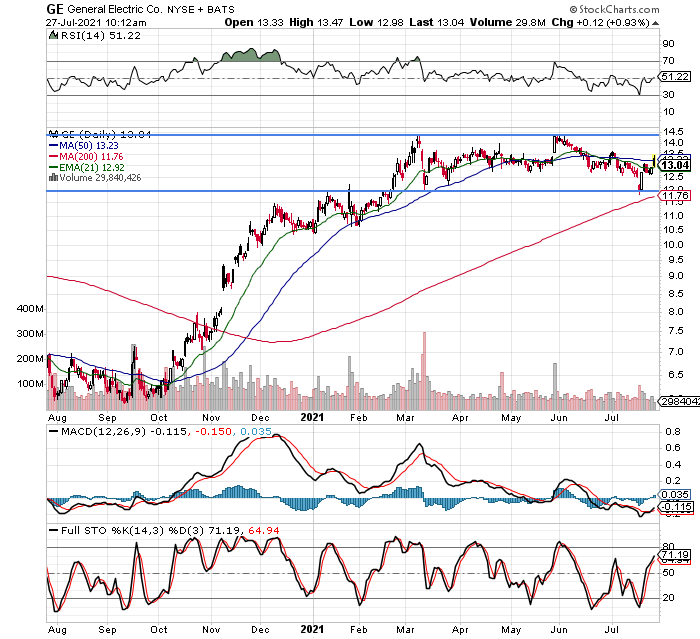 There is no doubt that business is improving at GE and that CEO Larry Culp is doing a simply excellent job. That said, I would have told you that technically, nothing changes for this stock unless it finds support at the 21 day EMA ($12.92), and makes a serious run at the 50 day SMA ($13.23). Both Relative Strength and the Full Stochastics Oscillator are showing some optimism, as the daily MACD does show some signs of pulling out of weakness.

There is a catch, however. GE is going to implement an 8 for 1 reverse stock split after the close this Friday (July 30th). While this may signal confidence from the management side to investors, I don't generally see reverse splits as positive. One would think that at the least, increased volatility would be introduced. This means that at the last sale of $13.04, an investor who owned 96 shares, would on Monday morning own 12 shares with a last sale of $104.32.

GE is a mid-sized long position for me. It has performed spectacularly, up 34% from entry. If there were no reverse stock split scheduled, my pivot would be $14.40 and my target would be $17.25. However, I feel that at $100+, even though the actual value of the equity will be unchanged, that investors will either add lots to longs in order to round out position size, or they will sell their shares and move on.

I am very likely to exit GE this week, prior to the event, and then see which way the wind blows next Monday morning.

Get an email alert each time I write an article for Real Money. Click the "+Follow" next to my byline to this article.
TAGS: Earnings | Investing | Stocks | Technical Analysis | Trading | Industrials