Not bad at all. Costco (COST) reported the firm's fiscal second quarter performance on Friday morning. Costso posted adjusted EPS of $2.55 which did beat the street by more than a dime. However, on a GAAP basis, the firm put together net income of $951 million for earnings of $2.14 per diluted share. This number missed estimates, but for reasons that in this environment might be very understandable. The GAAP number includes $246 million in pre-tax expenses resulting primarily from increased wages ($2 per hour premium) for employees working with the public through this pandemic. Costco should not be punished for this, the company should be applauded.

Revenue generation for the period landed at $44.77 billion, up 14.6% year over year, and a very nice beat of (>$1 billion) of expectations. One would think that given the fact that Costco reports sales on a monthly basis that maybe Wall Street in all of its wisdom might not be more than $1 billion off on its aggregate view, but there goes that idea. Comparable sales adjusted for gasoline prices and currency exchange rates increased 12.6% in the U.S. for the quarter, 10.6% in Canada, and 17.7% everywhere else. Total comp sales growth amounted to 12.9%. E-commerce all by itself enjoyed growth of 74.8%. I know that I helped push that number higher. Anyone need a plastic fork? I think I have a thousand of them.

Of all of our major sports, baseball is the chess match. The rest are all interesting in their own rights, and probably more athletic, but you can not be good at baseball without being clever. So, let's be clever, and think about Costco. We already know that sales were excellent, we already know that comparable sales were impressive. We know that margin suffered because this employer took an honorable route when the crisis hit and it's among a few other firms such as Walmart (WMT) and Target (TGT)  that found themselves oddly... in a commanding position. Fact is that gross margin of 10.96% was only 2 (count 'em) basis points lower than the same period last year. That means execution has been excellent. That means that both management and labor are on their 'A' games. Need proof? Core merchandise has improved by 71 basis points. I think I'm falling in love.

Let's talk about membership. The firm saw Q2 membership fees print at a cool $881 million, up 8%. In addition, renewals remain hot. North American retention is running at 91%, globally the number is 88.5%. Why? Because customers have been able to make a big trip every once in a while during this pandemic and load up on supplies. Is that slice of reality about to pass? Hopefully. That said, this is Costco, and inflation is knocking. These same customers might very well still make just periodic trips to Costco to load up on supplies... not to avoid contact with fellow humans, but to save money. That was, by the way, Costco's (or Price Club's) original concept for households and small businesses. For the quarter, foot traffic still increased, but that acceleration slowed to growth of 2.7% in the U.S., 1% elsewhere. That said, average ticket size exploded... up 8.5% here at home, and up a gaudy 11.9% everywhere else. 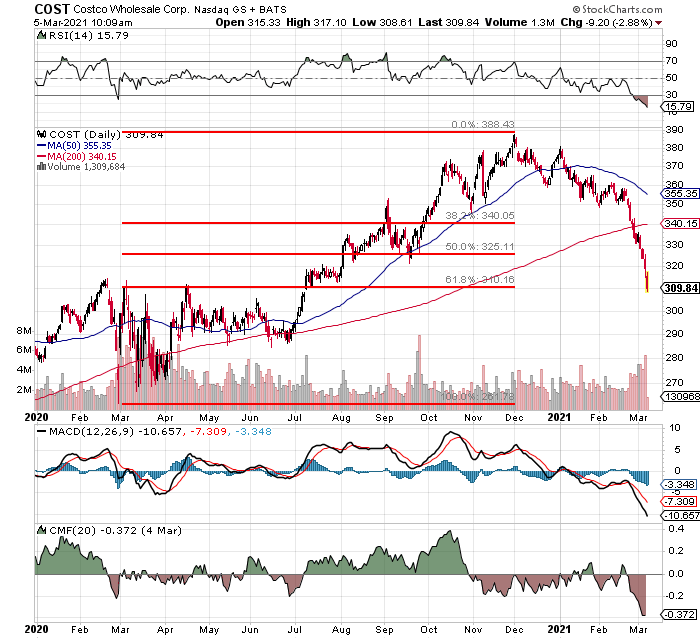 Oh look at that... the shares are severely oversold with an RSI reading of 15. Fifteen!!!! The daily MACD and Chaikin Money Flow readings look like something out of a cheap 1980's horror movie. Oh, and the shares are currently fighting with a 61.8% Fibonacci retracement of the move from the lows of last March through November. That leaves me but one choice... I am buying shares of Costco today, but I will wait until my article is public. I'm good like that.

Enter with 1/8 of intended position size.

Writing covered $350 June calls for close to $5 seems like an obvious move.

Oh, and let us rock.

(Costoco and Walmart are holdings in Jim Cramer's Action Alerts PLUS member club. Want to be alerted before Jim Cramer buys or sells these stocks? Learn more now.)

Get an email alert each time I write an article for Real Money. Click the "+Follow" next to my byline to this article.
TAGS: Earnings | Investing | Markets | Stocks | Technical Analysis | Trading | Retail | E-Commerce

The Silver Lining to This Market Might Just be Ethereum